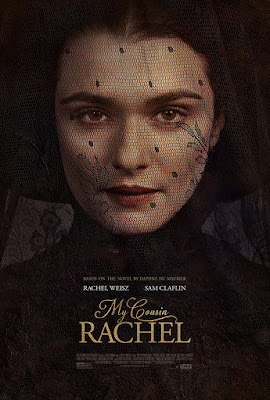 I saw the poster for My Cousin Rachel first, and I was immediately struck by how goddamned pretty Rachel Weisz looked on it. But that's a given. She is Rachel Weisz. She is goddamned pretty. And also she gets her cheekbones massaged by Daniel Craig every single night before bed, so she wins.

Anyway I knew nothing about this movie before looking at the poster, and as pretty as I thought Weisz looked the poster just made me think it was another costume drama where she'd cry beautifully in beautiful clothes a la The Light Between Oceans or The Deep Blue Sea. Mind you she's great at doing that and both of those are fine films, but that's not enough to make my heart pitter patter. Especially with a wet-noodle co-star like Sam Claflin.

Well I should've looked closer at the damn poster because the first clue that this was something different was right there. "Based on the Novel by Daphne du Maurier." I've never read this book - heck I'd never heard of the book, since the title triggered no response on its own. But the woman whose gothic tales inspired not one but two Alfred Hitchcock pictures...

... as the trailer rightly points out, well that'll get my blood pumping a bit faster. Anyway I didn't notice any of that on the poster, so it wasn't until I read The Film Experience's "Yes No Maybe So" on the trailer yesterday that I realized, "Hey you. Watch this damn trailer already." And then it still took me until last night, at which point...
.

I can't believe none of you told me about this shot of Sam Claflin
in front of a bookcase in the MY COUSIN RACHEL trailer! pic.twitter.com/1zKpqqzhZz
— Jason Adams (@JAMNPP) March 23, 2017

.
... I realized the real , profound error of my ways.
Even Sam "Wet Noodle" Claflin
is exciting me in this trailer!

Then again the trailer works overtime in ogling his big butt in those old-timey trousers, so they earned my admiration with effort. But (butt) seriously this is so entirely in my wheelhouse - spinning candelabras and storm slammed windows and poisonous broads in lace and cliffs crumbling under horses and getting humped on by a hot guy in a field while remaining inscrutable in the face...

Just fascinating how it seems to be directed by, uhm, nobody. I mean, this is the guy that directed chick-flick extraordinaire NOTHING HILL!!!

Darn it, I didn't even think to check the director. [quiet voice] I actually really like Notting Hill. But more importantly [not quiet voice] Roger Michell did direct ENDURING LOVE, which is a movie I fucking adore - a great sexy tense little thriller with Daniel Craig. I wonder if that connection got this movie made? Michell also directed The Mother starring Craig which I have always wanted to see because Daniel Craig looks like THIS in it and yes please.

Apparently it was made into a film in 1952 with Olivia deHavillan. How have i never heard of this?

OH MY GOD REALLY??? Must find!

The '52 version is well worthwhile, if only for Richard Burton's wonderful category fraud Oscar nomination as best "supporting" actor!

Saw the Burton version back in 1952 thinking I was going to see something "scary" and as a kid I was bored. Have since seen it again on TCM and still find it pretty boring.

You didn't know about the original film? I'm shocked, and not even in the "Casablanca" sense. The male lead in the de Havilland version was Richard Burton at his most hammy, and it's a wonderful film.

Without giving too much away, it's sort of a twist on Hitchcock's "Suspicion", with the sexes reversed. Is Character X evil, or just misunderstood?

...and, of course, "Suspicion" was the film that won the Best Actress Oscar for sister Joan Fountaine, who had also been nominated the year before for "Rebecca".

All three of these films are tremendous fun.

Before you see this, if you can, read the novel. It's amazing. Du Maurier was quite a writer: The Birds, Don't Look Now, Rebecca, and she had an affair with Gertrude Lawrence. You need to see the Olivia de Havilland/Richard Burton, as well. It's marvelous. This and Hush Hush Sweet Charlotte are her two evil Olivia movies and they're both superb.