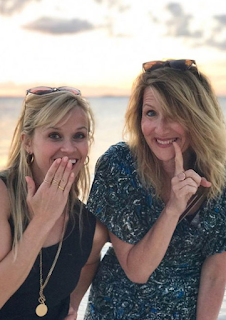 --- Big Little Love - I could spend this entire post linking to articles about Big Little Lies and still not have enough Big Little Lies to go around; it deserves all of the praise and then some. There wasn't a bad performance on the show, from the littlest of kids to Adam Scott's beard and on up to the new Mt. Rushmore of actresses. But here's just a pair - firstly at Decider our pal Joe argued that the finite nature of the show is what makes it so special (or one of the things, anyway) and we should embrace that. Before the episode aired I would've been aghast at not wanting more, but the finale was so perfect I think I now agree. Although that said in this post-finale interview Laura Dern says...

"But we had the time of our lives making this. People are asking us a lot if there is room for a Season 2 of this, and I know there is a lot of discussion, so. . . whatever it is, we will come up with something really fun for sure."

I simply must INSIST on behind the scenes pictures of Alexander Skarsgard's leather Elvis pants I SIMPLY MUST INSIST #BigLittleLies pic.twitter.com/aCaXVDoqoO
— Jason Adams (@JAMNPP) April 3, 2017

.
--- And Secondly BuzzFeed published an epic ode to the talents of Nicole Kidman through the years that's Must Read; be forewarned it's lengthy - it starts with her earliest roles (BMW Bandits y'all) and works its way up through her her typically astonishing work on this show. Only thing I'd argue with is the bit about her being invisible acting-wise for a few years before this but then I'm a spazz who pays too much attention so the concept seems alien to me.

--- Be Still My Sweetheart - I can't recall the context of how a week or two ago I got to reading up about Sleight, an upcoming horror film that got a bunch of buzz out of Sundance earlier this year,  but I had missed me at the time - anyway now that it's revealed itself to me I can't stop seeing stuff about it, or more specifically about its director JD Dillard. He's making a new thriller, one for Blumhouse (the studio that brought you all those scary Patrick Wilson movies), called Sweetheart... and why should you care? Because adorable Emory Cohen just booked the lead, that's why. [Edited to add: Oh right now I remember why I was reading about Sleight - the director is also remaking The Fly.]

--- The Dark Nightie - Normally this sort of thing would've gotten its own post but when the news broke last week I couldn't think of a single goddamn clever thing to say about it, and since the news was being stated everywhere else if I wasn't gonna be clever I couldn't think of a point - anyway in case you didn't hear Joss Whedon is going to make a movie about Batgirl, probably. Sweet! That said the only Barbara Jordan story I've ever read is The Killing Joke and I think he's probably going to stay far far away from that story. 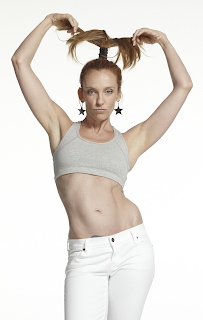 --- Calling Collette - While I'm sure Toni Collette would love nothing more than to star in a never-ending string of films worthy of her talents, and me whinging at her about not doing that and instead making a bunch of shitty TV shows isn't helpful, I'm still relieved to see she's signed up for a new movie, whinging be damned - she's going to star opposite Thomas Haden Church in a comedy called Shriver, which is about a man who gets mistaken for an author at a college book conference; Toni will be an English professor at the college, and I have a feeling "sparks will fly." Sounds like a slightly wackier Wonder Boys. These two have co-starred in a movie before, 2013's Lucky Them, so i guess they enjoyed the experience.

--- Fassy By Fassy - It seems like Michael Fassbender just says whatever he wants to say in this interview with Collider about his dual role in the upcoming Alien movie (thx Mac) so probably don't read it if you care about spoilers or whatever. I mean he doesn't give away the ending or anything but it feels entirely unguarded a chat, which is refreshing (I hate it when half an interview is "Oh I can't talk about that") but also had me on edge, lest I read too much. Bad news: No Spandex. Oh and in case you missed the three new teasers for the film that aired during The Walking Dead last night click here for those. 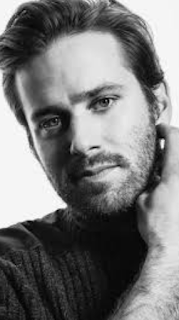 --- Armie Hammer is a Freak - While we anxiously await the release of Ben Wheatley's new movie Free Fire, the director is re-teaming with one of its stars (the hot one) - Armie Hammer has just joined the cast of Freakshift, Wheatley's upcoming movie about cops fighting subterranean monsters that already has Alicia Vikander in its lead. Also can I just say that I love the fact that I just got to write the phrase, in an off-hand way even, "movie about cops fighting subterranean monsters." We live in a magical world, sometimes.

--- Surrounding Annette - The only thing I could do more often than sit down and actually watch 20th Century Women (for the 10th, the 20th, the 30th time)  is read articles and reviews about and of 20th Century Women, so I was pretty excited to see our pal Dan wrote up the scenery for his weekly column The Furniture over at The Film Experience. I have to admit that I've found myself pausing the movie (on one of my many many times having watched it already) to stare at the furnishings in Annette Bening's bedroom specifically. Shelves! 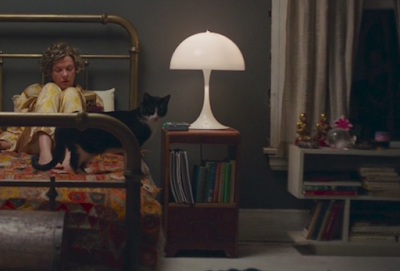