How Dreary, To Be Somebody 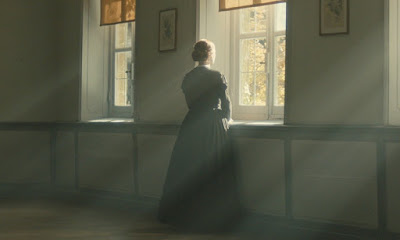 I have never seen Shyness realized as fully on film as it is in Terence Davies' A Quiet Passion. This masterful biopic of poet Emily Dickinson, out in theaters this Friday April 14th, captures not only the reticence and fear at the heart of being a shy person, but also its joys (sitting in the dark at night, the world dead around you, everything can seem boundless and easy and free, yours completely) and in turn the narcissism it can breed - when you spend a lot of time by yourself you start making up little stories, detached from reality, and you're sometimes the hero, sometimes the villain, but you, for good and for evil, are the axis upon which all rotates. No one can live up to this - no half-formed figure standing in front of you seems as assured, as understandable or approachable, as one's inner mysteries.

Emily Dickinson's stories were spun in gorgeous webs of word play, but these same webs knotted up around her and kept her cloistered, claustrophobic, suffocating beneath them. I know a little something of this. While watching the film I thought a lot about where Emily Dickinson would be if she'd lived today - would she have had a blog? Would she have spent her time photo-shopping animated love letters to Benedict Cumberbatch on her Tumblr site? It seems really likely, you know? 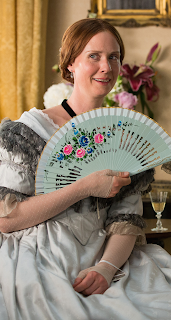 There's a lovely little scene at the heart of A Quiet Passion where Emily (a grand turn from Cynthia Nixon) stitches together one of her renowned little booklets of poetry to gift to the new pastor in town whose sermons have inflamed something in her. (In a Q&A after the film Terence Davies admitted this sequence was a fabrication, but it gets to the heat of who we've come to understand Emily to be anyway.) Emily manages to sweep the man away from his dullard wife for a walk through the garden, and she gives him her gift, and as the sound of bees buzz around them (the soundtrack to this film is exquisitely considered, using silence like a scythe through butter) she sinks back, behind, as the man goes to a bench to read what she has written for him.

We watch Nixon's face, only her face, as the man off-screen goes quiet and reads - we can sort of hear the turning of the book's pages amid the afternoon hum. And Nixon, her face, is flying, all while remaining stock still - she shows us how simultaneously mortified and elated Emily is all at once; the desire to run to and to run away from this man freezing her in her place. It is erotic and strange and quite something to behold. She will go mad with it, and we understand why.
.
A Quiet Passion knows that a shy person can make conversation; that we are capable people - we can be witty and friendly and find solace in other folks. But it takes its toll on us, and Life, as it ambles along indifferently to our preciousness, our porcelain nature, chip chip chips away, often confirming our worst instincts. People die, people leave, people get married and have kids and lives and homes of their own - they have harmlessly loud dinners among friends and acquaintances, and we are not built to bear it. It feels like a betrayal, of theirs yes but moreso by our own hands, because we know we're the ones running to the shadows, lowering our faces, every chance we get.

I felt a deep kinship across the ages with this woman, as Davies and Nixon present her, unable to come down the stairs to look a suitor (supple as Death himself) in the eyes, but then spending the entire afternoon dreaming of him anyway - a somewhat terrifying specter entering the house, faceless, slow moving, to find her waiting, lungs a'flutter and legs akimbo. He will not come. He must. He must. We will all go mad with it. 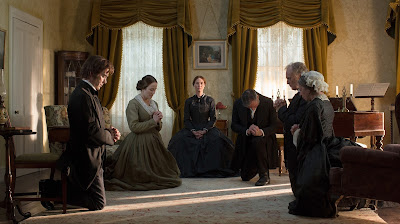 Here to echo what the others said. This is fantastically written - very insightful. I hope the movie lives up to this review.