All That Ozon Allows 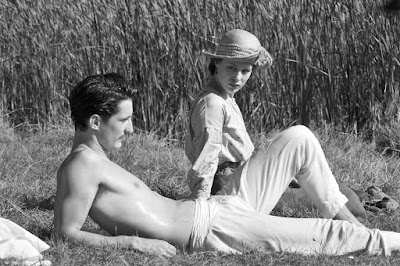 I can't remember what prompted the conversation I was having before the lights went down on Francois Ozon's new film Frantz, but for some reason the films of Merchant Ivory came up. It wasn't because I had Merchant-Ivorian expectations of Frantz - besides making a gif of the film's star Pierre Niney being his lanky sexy self in the trailer I had absolutely no idea what Frantz was or was about before going in. Even though I'm on the internet all day every day I've gotten pretty good at avoiding knowledge I don't want, as I figure it's best to go into some flicks with a clean, fresh brain, and I'd kept my brain good and fresh and clean for this one.

So anyway me and my company at this Frantz screening were for some reason having nothing to do with Frantz talking about Merchant Ivory before Frantz started, and right before the lights went down I expressed a sorrow that nobody seems to make gorgeous, lyrical and literate movies like Merchant Ivory once did anymore. Little did I know I was just about to get one from Francois Ozon of all people!

That's not to say that Ozon was previously known for illiterate movies; we're not exactly talking about Michael Bay remaking Maurice here. (Oh my god that sentence just broke my head.) It's just he's never made anything quite this restrained and old-fashioned before - the scenery sweeps, the music swells, the color blossoms and blooms in romantic fits amid weepy war drama. Point being it is grand and lovely and sad in the sweetest most melancholy ways, and it was one of those moments when the world gives you exactly the gift you're asking for at exactly the right moment.

Ozon modernizes the Merchant Ivory in swell ways, too - it might be a chaste movie but his queer heart beats hard under all of those stiff uniforms. Fassbinderian flatness and absurdity peeks around every corner. Niney turns on a dime (he's as wide as a dime too) from romantically furrowed fawn, all single back hand to the forehead and feeling a faint coming on, to a irritatingly prissy aristocrat in exaggerated riding pants in the most marvelous of ways. meanwhile Paula Beer's a world-class discovery, lugging us around a bewildering historical and emotional melee so softly and sweetly it's as if we're on clouds. To watch these two dance over the ghosts of lost love is to hug history close, affectionately, and to long for more even as it pains us, wounds us, profoundly.

No one ever talks about Ozon's first Merchant Ivory, Angel (2007), with Fassy, Romola Garai and Rampling. I loved it, even if no one else did (or even saw it).