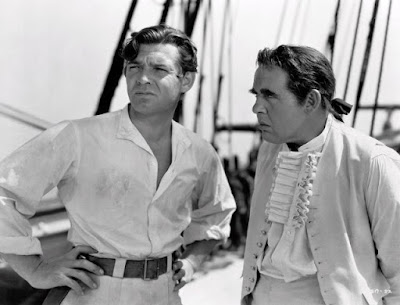 Christian: He doesn't punish men for discipline.
He likes to see men crawl.


Clark Gable (who was born on this day in 1901) is talking about Charles Laughton's character there, and of course he is. Everybody knew (including his wife!) how Charles Laughton liked to watch men crawl - especially men who looked like Clark Gable. And who could blamed him?

The homo-tension is thick in Mutiny on the Bounty, but weirdly it's mostly between Gable and his co-star Franchot Tone. I mean it's not that weird, they were two gorgeous actors constantly shoved into little sarongs together - it just comes naturally in such situations. Still the movie leans into it - even though they're framed in this scene as checking out the local girls you get the feeling the four of them will be returning to a single thatch hut that evening, if you know what I mean.


.
Oh and it's well known that Gable was fucking Tone's wife (a little lady named Joan Crawford) off and on for a very long time, including this period here -- given the vibe these two are giving off here I honestly wouldn't be surprised if Joan had the both of them at once. I usually side with Bette Davis in the "Bette vs Joan" feud because Bette Davis was just a more talented actress (I'm not calling Joan a bad actress, she did some stellar work, but Bette was pretty much always amazing) but when it comes down to impressive sluttiness Joan takes the cake, and I tip my hat to her. 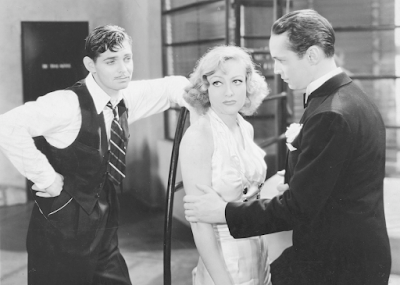 I've always felt that Gable looked better without that pencil thin mustache that he popularized but he carried it off better than most of the other actors who adopted it. Unlike the others it came to represent some of his persona and once he grew the thing it was hard to imagine him without.