Timothy Olyphant Wants You Inside Of Him

We haven't checked in on Lil' Timmy Olyphant in too too long! Not since that time we saw him prancing around in skimpy underpants on stage, probably. (Good memories, good memories.) So what's the deal with this Santa Clarita Diet show anyway? I haven't been paying attention but that ad they ran during the Globes did grab my eye. Plus Scream reunion! 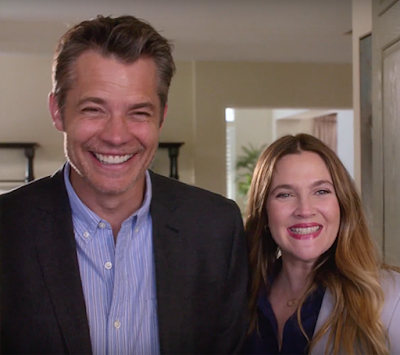 Yeah yeah they're in seperate films in the series, whatever - everybody in that damn franchise is family as far as I'm concerned. In case you have no idea what I'm on about (join the club) Santa Clarita Diet is a new horror comedy Netflix is dropping February 3rd that co-stars Tim & Drew as suburban cannibals or zombies or something. It also co-stars Nathan Fillion and Patton Oswalt! Geek overload. Here's a Tim-centric teaser:
.


.
In related news I guess Tim was on Ellen Degeneres' Show earlier this week (via, thanks Mac) and he told a story about how some detectives sat him down recently to tell him that he'd been the victim of a video-taping gym locker-room pervert! (A pervert after my own heart.) The detectives assured Timothy that they had the pictures and they'd never get released, and here's what this delightful man had to say about that:

"I say, ‘Whoa, whoa, whoa. It’s never going to get out?’ And he says, ‘No. It’s not a problem.’ And I say, ‘Well, how do I look?... Let’s think this through here. We could turn this frown around. I don’t know what the angle is, but this could be… Careers have been made out of perhaps less."

I go back and forth on Timothy (not literally, if only). I find him attractive but at the same time there's something about him the rubs me the wrong way (again, if only). But that quote is pure endearing genius.

Hoping there is some connection to "The Lost Boys". Please don't let me be the only person who understands that reference.