--- Monster in the Moonlight - Moonlight's Trevante Rhodes (see another picture from that shoot right here, and then try to breathe) is hopefully going on to a whole bunch of jobs in the wake of that film's success cuz we sure like to stare at him (and yes blah blah talented too blah) - and here's news of one right here! He's just signed on to co-star in the new Predator movie that Shane Black is making. MNPP fave Boyd Holbrook is already signed up for the movie - the two will be playing buds battling the beast in "a more suburban setting" supposedly, but details are slim so far.

--- And Speaking of 80s sci-fi starring Arnold Schwarzenegger I loved this list at The Guardian of dystopian-set movies that movies from the past that were set in the year 2017, including the great trash that is Running Man. God I love Running Man so much. I might have to watch Running Man tonight now that I am thinking about it - I feel as if it really for real will have a lot to say about The World We Live In Now. (Excuse me while I go cry some more.)

--- Fishy Dish - I hardly ever go to AICN anymore but I saw this making the rounds yesterday and it's pretty entertaining - Quint scanned in an entire promotional booklet that Universal sent out to distributors in 1974, telling of the movies they're about to release or about to start filming, and besides there being some very cool alternative art-work that's never been seen anywhere else (like that image for Jaws to the right) there's also several projects that never happened at all that make for fascinating What If's.

--- 21st Century Classics - Have y'all seen 20th Century Women by now? I keep mentally chastising myself for still not having written up a proper review for it even though it's been on my favorites of 2016 list since I saw it at NYFF way back in October - I've seen it twice more already and yet nada here! Shame on me. While I work on that (or more likely go stare at pictures of Jake Gyllenhaal's Bulging Trunks while feeling guilty that I'm not writing that) you could go check out this great piece at Vulture on some objects that inspired director Mike Mills in the making of the movie, though. Also can we talk about how horrible it is that it looks like this movie might not get much awards traction? Awards are such utter bullshit - I know I saw this every year but every year they remind me fresh like. 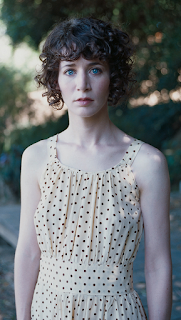 --- After June Comes - In Mike Mills adjacent news Criterion chatted with his lady partner the great Miranda July about her love of Jane Campion, which, well duh, and also they have official word that she is actively working on the script for her third film! Yahoo! It's not a lot of specific info but it's sumpthin. Says the Lady July:

"Right now, I’m writing my next movie, and I’m interested in structure because I just came off of writing a novel for three years. Now I know all these things about telling a story that I didn’t know while I was making my last movie [The Future], things I wasn’t even that interested in. I’m just eager to use this new muscle in the medium of film, where I know that the problems that come up are often ones created by the fact that I didn’t think hard enough about structure when I was writing it."


--- Critical Reverence - I'm just now noticing that I'm gathering up a lot of rather random links for this link round-up but because of the holidays some of these links have been staring at me for a long time now, so scattered they be - for instance I don't really know a jazzy way to sell this conversation with film critic Molly Haskell, where she talks about her partner film critic Andrew Sarris' death and also, you know, lots of lots of movies, but I found the conversation pretty riveting all the same. My copy of her book From Reverence to Rape was dog-eared and tattered to hell from over-use in college. 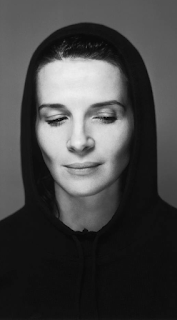 --- Speaking of Old Stories both of these casting announcements involving Gallic faves are from before the break but I'd be remiss not mentioning - first up Abel Ferrara has snatched Isabelle Huppert for his next movie, which is based on Jungian dream theory and is called Siberia and which will also star Nicolas Cage and Willem Dafoe. Golly that would be an interesting set to be on. And second up Juliette Binoche is going to star in the next movie from director Claire Denis. For those keeping score no I still haven't liked a Denis movie, but if anybody's gonna get me it'd be Binoche. Then again the movie will also star Gérard Depardieu (ugh) so maybe not.

--- As Long As we're lumping disparate things together now to save me time and sanity (these posts always take so long after a break and yes I would love some cheese for my whine thank you) here are three more interviews from varied times over the past couple weeks of note -- RIGHT HERE you can read a chat with Disorder writer-director Alice Winocour about the making of that fantastic movie (read my review of it here) starring Matthias Schoenaerts and Diane Kruger. Can't wait to see what Winocour does next. And RIGHT HERE you can read a brand new interview with the one and only Sigourney Weaver, including some hot as hell pictures... 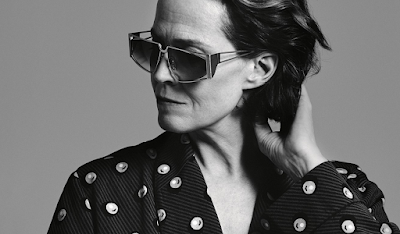 ... damn, woman! I guess she talks about her love affair with science fiction and so on. OK so I haven't gotten a chance to read that interview yet but it's Siggy! And finally RIGHT HERE you can read a rather old chat (I mean it's nearly a month old! It's dust practically!) with Tilda Swinton about A Bigger Splash (starting and finishing with Schoenaerts adjacent stuff, as one always should) - I tweeted my love for this chat at the time but if you haven't read it yet, do.

--- And Finally Finally the first official image from Terrence Malick's new movie about the music scene in Austin, which has been re-titled Song to Song (it was previously called Weightless), was released a couple of days ago and the entire image at this link is slightly broader, including Rooney Mara standing off to the left in a blonde bob of all things, but I had to zoom us in on the shit that matters most because humina humina holy mother of god... 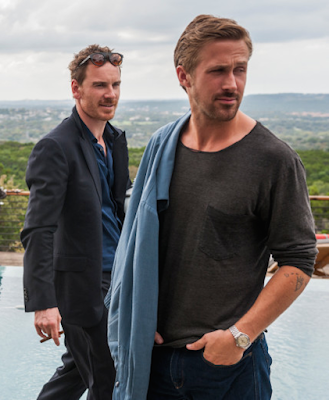 Dorkly did a similar list of "Things that Will Happen in 2017, According to the Movies" a few days ago. There's some overlap with the Guardian list, but they're both fun.