In the Body Cavity of Madness 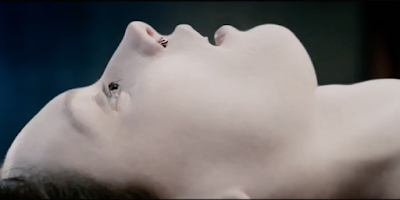 The violation of our bodies, of our human flesh, is the major defining element of Horror. Make all the arguments you want for the importance of mental or spiritual anguish, genre-wise - when it comes right down to it the most primal something-something beating deepest inside of our brains is "Please Monster, Don't Bite Me." David Cronenberg knew this and made a dozen terrific movies about it, folding the term "Body Horror" around himself like a warm blanket of recently removed skin.

And the Norwegian director André Øvredal (the man behind the surprisingly rollicking good time that was Trollhunter) was paying attention - his latest movie is called The Autopsy of Jane Doe, and when it focuses in for long, long stretches on the titular task at hand it redefines gooseflesh. Hell your  scalp will crawl right off of you and into the seat beside you and then demand some of your popcorn, if you let it.

The Autopsy of Jane Doe stars Brian Cox and Emile Hirsch as an exceedingly well-cast father and son who run a particular sort of family business, handed down through the generations - they're coroners, holed up in their basement slash professional space, bridging the antiseptic gap between hospital and, well, basement. Nothing's as sterile as it ought to be and nobody's as rigorous about the details as they ought to be - movie coroners are always sloppily eating sandwiches over flayed torsos and these two fit right in. 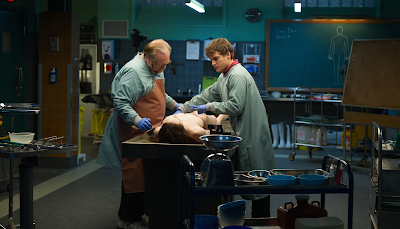 Then one dark and stormy night a most particular corpse shows up at their door, and things, already quite weird, only grow weirder from there. That's all I'll say about that because a lot of the fun of The Autopsy of Jane Doe is sorting out where the hell the movie's going with itself - be forewarned the answers get pretty goofy, but the movie's self-aware enough about that to squeeze itself through its rougher spells.

It probably actually gets a little too worked up, unraveling the riddles of its own weaving - Øvredal is a man who loves world-building; a lot of the fun of Trollhunter was learning the rules of its supernatural namesakes. But that instinct doesn't do Jane Doe as much good as it did in that previous effort - Jane Doe presents us with a lot of weirdness in its superior first two acts, only to work overtime in its last third to rob these mysteries of their strangeness and explain them off too just a little too thoroughly.

But its build-up is killer, and the methodical madness of the Autopsy beating (or not beating as it were) at its black heart is horror movie magic. Cox and Hirsch have a fine rapport with one another and they guide us into this just-left-of-scientific maelstrom with ease - before you even realize it you're giggling at the sight of ribs being cracked like walnuts, and that my friends is a weird, a wonderfully weird, place to be.
.
.
The Autopsy of Jane Doe is out in theaters on December 21st -- I think it hits demand thereabouts too? Oh and in case you missed my pics & video of Brian Cox, Emile Hirsch, and André Øvredal doing a Q&A for the film earlier this week click right here for that.
.
Who? Jason Adams When? 5:35 PM