Whatever Happened To Joan Blondell 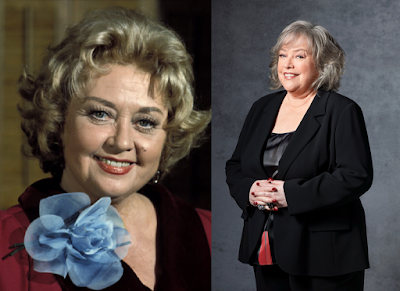 As if I wasn't already entirely hot around the collar and bothered about the bits over Ryan Murphy's upcoming series Feud -- which will detail the long bitter ego battle between Bette Davis and Joan Crawford, culminating on the set of the camp masterpiece What Ever Happened to Baby Jane in 1962 -- he's gone and reached down my throat and turned his elbow upward and stuck his pointer finger right onto my most ecstatic place and cast Kathy Bates, my beloved Kathy Bates, as Joan Blondell, my beloved Joan Blondell.

Several weeks back we celebrated Blondell's birthday here on the blog and I admitted what a big fan I am of her work with Busby Berkley in his 1930s musicals - well Blondell had a very long career, working right up until her death in 1979, but more importantly to this specific tale she was Bette Davis' BFF. So I guess we'll be seeing lots of conspiratorial whispering between her and Susan Sarandon, side-eyeing Jessica Lange, et cetera, and I think my toes just broke through my shoes from curling so hard.
.
Who? Jason Adams When? 1:03 PM

And, as always, Kathy Bates is AMAZING this season on American Horror Story... horrifying and sympathetic all at the same time

Just looking at those pictures side by side gives me the warm and fuzzies! So perfect. I too love the fabulous Miss Blondell, have you seen her late career triumph in Opening Night..ironically she stepped in at the last moment when Davis had to bow out. So many connections.

I guess it's too much to hope that they'll cast someone as June Allyson so that she & Kathy/Joan could have a belated smackdown over Dick Powell who Junie stole from Joan. From what I've read Allyson was VERY different behind the screen than she was on, a grasping careerist who would walk over pretty much anyone, held grudges and was free with her favors.

Kathy Bates is a national treasure.