Its Easy Cuz They're Beautiful 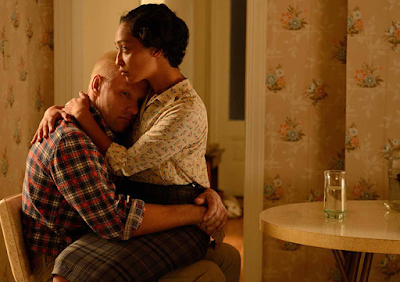 So much of Loving is left on us, the audience, to fill in the blanks - to project our anxieties and ideas upon the ordinary, earth-quaking romance of Richard and Mildred Loving. We know what they did, and what it meant, already. The movie wants to be like them - it doesn't want to call attention to itself, until it has to. Director Jeff Nichols and his actors Ruth Negga and Joel Edgerton take up the task of turning these symbols into small folks, ironing laundry and wiping down engine blocks, longing for nothing more than living their lives together as carefree as any small folks can muster.

So we attune ourselves to the small things, the what's not being said. And there's a scene about smack-dab in the center of the film involving a phone call that just about spun my head right around, and all that happened was Ruth Negga sat down. She sat down too quickly. As if her legs had given out. And it was like a freight train ran over me in the theater. 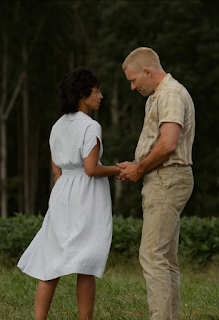 Nichols makes us lean in. We get close to these people. It's not hard with these leads - you wanna climb right in and snuggle on the couch with the both of them, laughing at The Andy Griffith show (and it would of course be Andy Griffith; Mildred seems as if she might've looked to Aunt Bea for pie recipes). They are both so strong, and decent, and human. Not perfect, but lived-in and lovely all the more for it.

The film side-steps a lot of the indignities because we carry them with us - I don't know if everyone will watch the movie the way I did but by leaving the shoe dangling, the silence of violence hanging in the air, always on the horizon, it disallows that release. If we got a scene with an actor playing a big blundering racist making ugly faces as they screamed invective it'd be easy to point at them, to say "That's not me." Loving is not about the racists - it's about the Lovings. We bring the racist system, the framework of otherness, with us into the theater ourselves. Now let's let them speak for a change.
.
Who? Jason Adams When? 2:56 PM

Excellent review... one of the major problems I had with "The Help" which so many white people seemed to love was exactly the point you made here; Bryce Dallas Howard's cartoonish racist was so overdone that she was practically a Disney villain... such a horrid contrast to Viola Davis' beautiful portrayal.

A perfect companion piece to this excellent film is the documentary on the Lovings currently screening on HBO. It's equally moving in some respects and actually by showing us the real people involved it heightens the creative achievement of Nichols's film.