Left To Your Own Flotation Devices 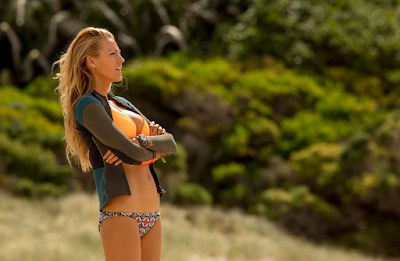 Breasts!! What are they good for? As a gay man who was weaned via formula I have to admit I've occasionally been at a loss. Pillows? Free drinks? Sure, yes, of course, I went to college. But the the raison d'être, the world's fixation, all of these many years it's kept eluding me, like watching Dolly Parton swim in and out of a fog. Will I ever learn, whomp whomp?

Well thanks to The Shallows I now know that breasts are a girl's best weapon against all water-bound maniacal monster predators. Who knew? Well somebody did, lots of people I guess, and now I do too. I'm in on it! Thanks, movie. And it turns out that this is an especially important thing to realize now before it's too late, since it means I'm definitely and definitively screwed if it's ever me against a shark type. Here all these years since Jaws I've been thinking my my gun dick would save me. Chief Brady had it wrong! Spielberg, lying liar! 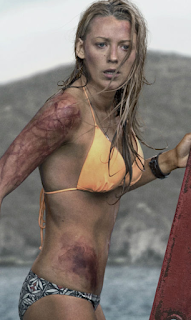 I mean would I have ever thought of using the necklace sitting delicately between my luxurious Texan bosoms for a quick-serve surgical instrument? No I would not have thought such a thing, not ever, because there be no luxurious bosoms here upon which I can rest such things. Honestly after watching The Shallows I don't even know how I make it out the front door every day, much less to a rock astride a mysterious Mexican beach, swollen with beauty and intrigue. Positively swollen!

Should I milk this any further? Do understand that I say all of this with great affection. The Shallows manages to be as tight a thriller as Blake Lively's lycra. It never loses sight of pacing, or of a sense of space and location, or of that bright orange bikini with the little strings. We know where everything is at every moment, from the shore to the dingy to the bazooms. Now that's a master filmmaker at work.
.
Who? Jason Adams When? 5:17 PM

I liked it, but I swear--if all the slow-motion shots had elapsed in real time, the movie would have been about 45 minutes long.

This is such a sexist review, and not remotely funny or clever. If the movie was about a half-naked man, you wouldn't have a problem with it, but because there are maybe one or two gratuitous shots of a woman in a bikini (which is what women wear to the beach, last I checked) you decide to make that the focal point of your review. You could have been focusing on her physical strength, or her mental ingenuity, or the fact that she is coping with the loss of her mother, or her ability to survive situations that most other people couldn't, but no. You reduce her to her sexuality, which is really gross. I swear, you've somehow managed to spend more time looking at/thinking about Blake Lively's chest than any straight man.

I kinda can't believe anybody took the bait! Hugo, this review is for you -- thanks for making it worthwhile :)