I Can Feel Him Coming In The Air Tonight 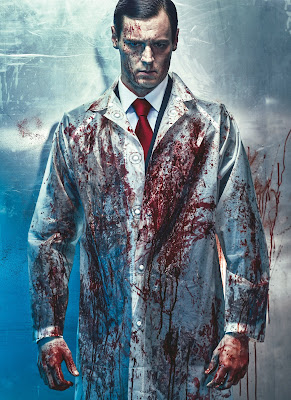 You guys, I have to go return some videotapes... actually I have a doctor's appointment, but close enough. But before I vanish for a couple hours I figured I'd leave you with some quick thoughts and feelings (and pictures) on the American Psycho musical on Broadway, which I saw over the weekend and have yet to mention! Which is nuts! I've been looking forward to seeing this thing literally for years -- in 2008 when the project was first announced I was right on that shit, and I haven't let up for a minute since. 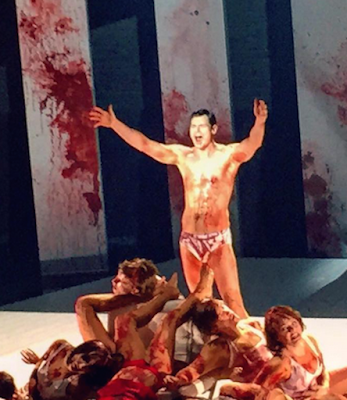 And here we are and there's Benjamin Walker as Patrick Bateman (captured by this horrible slash awesome person who took a picture in the middle of the show) rocking his bloody tighty-whities - on that front let it be known that Ben is in those tighty-whities when he enters the stage and he spends at least an hour of the show total, scattered over its run-time, in nothing but. It is fucking glorious.
.

.
Y'all know I'm not a "musical" person so I had to adjust myself to the whole "singing and dancing" thing very quickly, but once I did I enjoyed the show a lot - which wasn't a guarantee! I usually go see all of the horror movie based musicals and it's hit or miss. I mean I wanted to set myself on fire during the Evil Dead musical... but then I loved the Silence of the Lambs one. The songs here are up and down in quality but the show picks up steam as it plows along, saving all the best stuff for after the intermission - the number immediately following the break is easily the highlight (forgive me for not knowing the title), effortlessly channeling what a "musical version of American Psycho" should be as Bateman dance-kills a bunch of 80s hipsters while romancing us on the mic. It's magic.
.

.
The actress playing Evelyn (the Reese Witherspoon role in the movie) is very very funny (I guess she's from Masters of Sex?) but it's Benjamin Walker's show and while he leans heavy on some of Christian Bale's original interpretation of the part at times he still owns it, confidant and terrifying and sexy as fuck, pacing the stage like a panther in Vuitton. I want to go see it again and again, honestly.
.

Before the blood #AmericanPsycho
A photo posted by Jason Adams (@jasonaadams) on Mar 25, 2016 at 6:39pm PDT

You and I share some of the same quirky tastes in movies and men but try as I might, I can't find anything interesting about Benjamin Walker. Glad you enjoyed the show, though.

My boyfriend felt the same way going into seeing this show and as soon as he saw BW in person with his insane shape he was like "I WAS WRONG." He's soooooo tall and slim-hipped and broad-shouldered he looks like the cartoon drawing of a man. In a glorious way.

I really enjoyed the London cast recording. Benjamin Walker also doesn't do much for me, though I would take him over Matt Smith's butterface!