Since Brad Pitt's got a new movie out this weekend I decided to go with one of his (many many) death scenes for this week's Way Not To Die, and why not this, his maybe most outlandish one ever? (Or at least second to this one.) And I kind of fell in love with how gorgeously rendered this sequence is by Ridley Scott though so let's hit the jump, there are a lot of caps...
.


I mean isn't that just a beautiful sequence of shots? The grays of the composition and all those criss-crossing lines of steel and glass and sidewalk, and how all that sterility dissolves into a goopy muck, both visually and, you know, literally. Well done, Ridley Scott.

And Brad Pitt clearly took that line from Fight Club to heart:

It's become a running gag in his movies, like he's Sean Bean or something, that he keeps getting murdered in horrible ways, but I think his death scene seen here might just be the cherry on top of a bloody beautiful sundae. It's... memorable! It's just so prolonged and graphic and, as with all the movie, it just goes for it well past the point of going for anything has ever gone. And I love that Ridley cuts straight from Brad's decapitated head being dropped gently onto his crotch to some straight up sweaty Fassy sexiness: 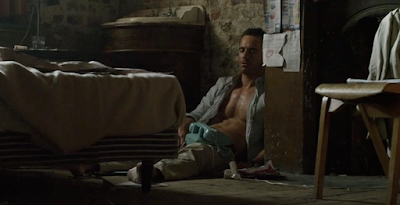 Somehow that cut, the emotion of it, makes total sense to me -- there's a poetry in it all its own, anyway. Listen, The Counselor is an insane movie. Insane. But it's fucking fascinating and I'd rather watch it again than re-watch The Martian, which was fun in a toss-off way but pretty disposable in the end. If Ridley insists on grabbing the Alien franchise like a spoilt child and hissing at anyone that comes near it I hope he uses more of the stuff he used on The Counselor than he does use stuff he used on The Martian, anyway. 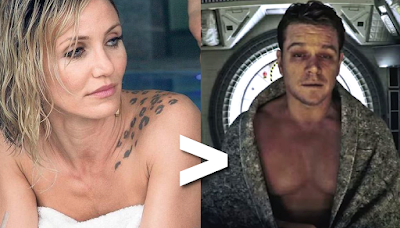