Okay here's the deal, I've never actually seen Damien: Omen II before, but the boyfriend was watching it the other day while cooking and he stopped everything to grab me and drag me into the kitchen to watch this scene. So I have seen this scene, and now I must see the entire movie, because hot damn it's ridiculous fun. Anyway I just feel as if you should be aware, here at the front, that I have no idea why this is happening to this poor lady. Okay on with the context-free weirdness then...

This scene goes on for a long long time,
so let's take the rest after the jump...
.

God love a dummy! Dummies are the best. Where would we even be without dummies? Nowhere and no place, that's where. Anyway I gotta give props to this actress Elizabeth Shepherd - I don't know how much of this is her and how much of it is a stunt-double but it seems convincingly her in some of those shots with the bird and that seems like a shitty, shitty day of work.


Any fans of this movie? 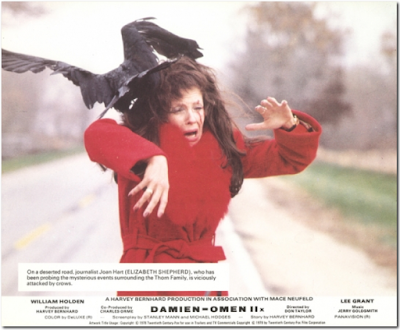 "I never believed in the prophecies of the Bible either!"

This is my favorite Thursday's Ways Not to Die ever. And that's really saying something! It's such a fiendishly campy, ridiculous, delightful death scene. Bravo.

LOVE this movie, LOVE this series. Exception being the terrible 4th movie with Faye Grant (the books went in a different direction that were far more horrifying.) Can't wait for the TV series to finally make an appearance so we can get some hot new-adult Damien.

There's an awesome scene in an elevator too. Saw it when I was young and still freaks me out when I go into an elevator.

Yes, was going to comment on the elevator scene -- what a way to go for poor Anthony from Designing Women. The scene under ice is freaky, too. All in all, it's an enjoyable movie.

Saw this at the drive-in in '78 and each of its ridiculously over the top deaths freaked me out even more: buried alive, the elevator cable, hockey game/frozen drowning, the pesticide plant, the lorry, cut in half by a train, the knives... and whatever the hell happened inside his cousin's head. Eesh. You wouldn't know it from those gifs, but Elizabeth Shephard is actually a great actress - saw her a few years back in "The Gin Game" and she was fantastic.