On Top of Spaghetti 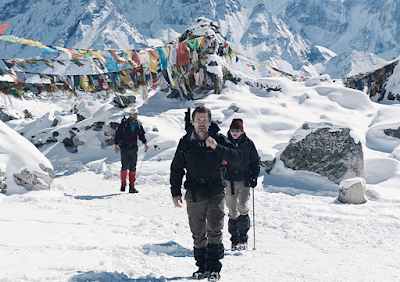 I keep having to reference the Brian De Palma documentary that I watched at the New York Film Festival without actually being able to review it (that'll come later over at The Film Experience once the fest properly begins) but BDP has so much to say about creating cinema therein that it's kind of infects your brain, once you've seen it, with lessons. And so watching Everest I kept thinking about what he had to say about delineating space in a film, and how important it is to make sure that the audience knows their layout, and understands what is happening where. It's an old lesson, one Alfred Hitchcock was always incredibly strident about too, but it's a basic building block that too many directors cannot seem to get ahold of... and Everest suffers for this sin mightily.

Compare Everest to Mad Max Fury Road -- this might not seem immediately obvious, but they both have the same basic narrative thrust: Mad Max Fury Road is about a bunch of characters running away from one location and then turning around and running back towards where they started. Meanwhile Everest is about a bunch of characters starting at the bottom of a mountain, getting to the top, and then just trying to get down again.

And yet Everest bungles our understanding of this straight line at every, dare I say it, turn. It never gives us a clear sense of where things are or how far apart they are -- Sam Worthington's team is glimpsed through binoculars at one point on the "kiddie slopes" which seem to be over on another side of the mountain, but it's never really clear, and then he's in their base camp not long after that. Jason Clarke somehow ends up on some strange little fold of the mountain at one point but we really don't know where it is. There are a bunch of examples like this -- points of interest are name-dropped, but we're never given enough information to map the spaces out in our head, so when the entire narrative devolves into characters at different locations trying to desperately make it to the home point we can't suss out what it all comes down to.

And so this flaw built right into the foundation of the film collapses it from the inside. What we end up with is too many characters in too many locations stretching our attentions too far apart, past the break. There are individual pieces that work (some very good bits of acting set on top of some beautiful and scary displays of Nature at her best and worst) but the base shakes out from under rendering the highest of peaks as flat as a pancake.
.
Who? Jason Adams When? 1:20 PM

But, was there Jake Fur? I know we don't get Jake Ass, those assholes, but, do we get Jake Fur? This seriously impacts the DVD market.

I was totally going to say something quite similar to das buut.

The Jake Fur Report: All you see are a few shots when we first meet him, shirtless in swim trunks sunning in a lawn chair, as seen in the third gif from the first trailer here. The first two gifs that show him banging the pans? That shot isn't even in the movie. Much less any bare ass, like we saw from the set.

I mean I'm grateful for any time Jake's shirtless but HE GOT HIS ASS OUT and they didn't share it. Fuck them!