Feel A Little Cowpoke Coming Through 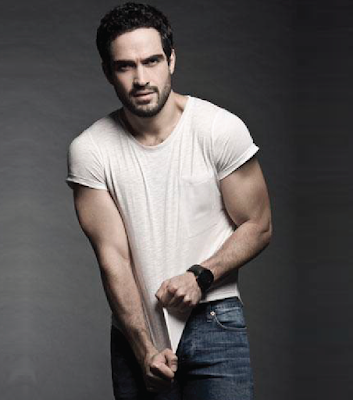 Alfonso Herrera, who was recently seen doing this...

... to Miguel Angel Silvestre on Sense8 (not to mention this, and this, and especially this), and who got his very own big gratuitous post back in March... well you'd think that was enough? Let somebody else have things for a change, dude!

But no, Alfonso wants more... and truthfully we want more Alfonso (my boyfriend took one look at him & Miguel in Sense8 and put his money down on the former), and so this is good news as far as that is concerned -- he's just signed on to star in a TV adaptation of the John Travolta & Debra Winger movie Urban Cowboy. It's being shepherded by Craig Brewer, the director of Hustle & Flow (BUT MORE IMPORTANTLY BLACK SNAKE MOAN). Anyway literally the only thing I remember about Urban Cowboy, which I haven't seen since I was a teenager, is this shot of John Travolta naked in bed...

Awww, I hope he doesn't leave Sense8 so soon.