I have to admit that right here, for a split second, I thought maybe this scene was going to go differently than it does. I mean there are worse things than being tied to a rock and having Mads Mikkelsen tear your clothes off, you know? Actually... yes, it turns out there are much much worse things than just that, and Mads is about to show us. Since this one's gross I'll take the rest after the jump...

Okay right here for a quick second I went back to that thought I was having earlier about sexy things - doesn't it look like something besides disemboweling is happening in that shot? Unfortunately...
. 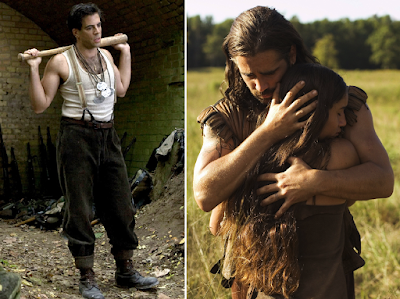 Mads is typically great in it though - I also still haven't watched Refn's Pusher trilogy yet (how I can have watched this scene of 95% Naked Mads and not gotten right on that I'll never know) so this was my first look at Mads as Nicolas' man-muse and I liked what I saw. The character's silence feels like a reaction to the hyperactive verbosity of Tom Hardy in Bronson just before...

... and I think it foretells the quietude of what Gosling's about to be called upon to deliver in Refn's next two movies.

But, no offense to Ryan, Mads has just got a better face. The sort of face you can't look away from. More than that - you actively don't want to look away, and you're angry if the camera cuts away from it. Valhalla's biggest strength is it stares and stares (and stares) at Mads' face. What a strength to have!