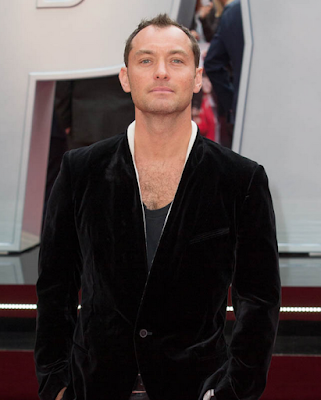 Coincidentally I also love Jude Law's chest hair, so at least we've got that much in common. I don't know that I'd leave the house for a red carpet event without making sure I was wearing a dress shirt, but hey, I'm not a famous actor who loves his chest hair, what do I know? 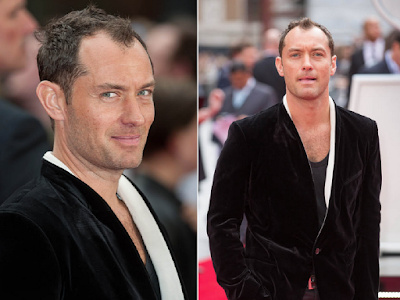 I do sometimes feel like he's trying to make up for what he's lost up top though. "See folks? No problem in the hair department! It just shifted downstairs!" He should just wear a speedo then if that's his purpose. Seriously, Jude, no one would mind. NO ONE. 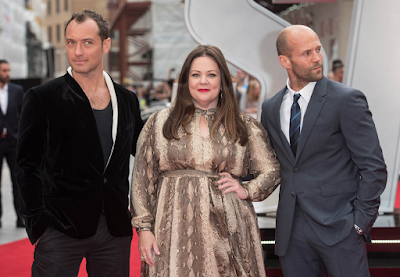 These pictures (via) are from the Spy premiere in London yesterday -- look at Melissa's smile, sandwiched between those two. Damn her, the lucky so-and-so. I'm seeing Spy tonight! And I'm really very much looking forward to it. 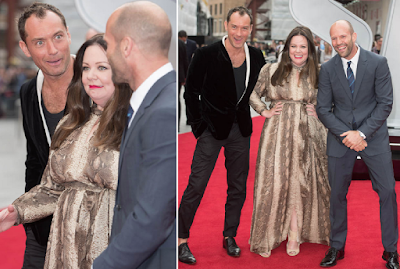 Several new clips from the film were released this week; I've tried to stop watching new footage because I'm afraid all the good gags are getting out there but here's one centering on Jason Statham because I keep hearing he's a comedic revelation in the movie and I can't wait. Although anybody that's seen the Crank movies already knew dude's funny as heckfire.
.
.
Spy opens on June 5th!
.
Who? Jason Adams When? 10:15 AM

I was in London and there, in Leichester Square, was a billboard for a quartet of productions coming up at the Royal Shakespeare Company. Judi Dench, Kenneth Branagh and Ian MacKellan were three of the actors who would be doing shows, and the fourth was Jude Law, who would be playing Hamlet. He was on the far right side of the billboard, wearing a v neck shirt showing off his chest hair. As you scanned the poster, your eyes were drawn to it, and I think I audibly gasped when I looked at it the first time. I took a picture, but it didn't turn out (shit). However, I made a point of walking past that billboard several times while walking around London!!

I didn't get to see his Hamlet. It wasn't booked until the following Spring. Instead I saw Mary Poppins, which was so good I saw it twice and Con O'Neill, another actor with a hairy chest, in Telstar, a terrific play about Joe Meek. It's been filmed with him and Pam Ferris, and worth getting on dvd.