--- Just Say Idris - It's a good week to be Idris Elba's agent - yesterday there was the news that Idris is replacing Jamie Foxx in Harmony Korine's new movie, and today there's the news that Idris is probably going to play the villain in the third Star Trek movie! I'm a little nervous about the rumor that he'll be a Klingon though... it is very very difficult... probably entirely impossible (I know somebody's going to argue with me about this)... to remain sexy with that damn Klingon make-up on your head. I don't want Idris under that stuff!
.
--- Grand Ol Gipper - This is the greatest thing I have heard since... well since this morning when Jake Gyllenhaal maybe joined the Tom Ford movie. Whatever, I get excited about things, sue me! Bruce Campbell is going to play Ronald Reagan, yes that Ronald Reagan, in the second season of Fargo. Apparently the character of the actor-turned-prez will show up on the show, which is flashing back to the 70s this time around, whilst on the campaign trail.
.

--- Jock Dandy - There's a new interview with Everybody's Second Favorite Tighty-Whities Wearing Murderer Finn Wittrock over at Out magazine (thanks Mac) where he talks about puppies and gay people, perhaps not in that order. (Beware spoilers for Unbroken though.) There's also word that he's playing a football player in his next project, and about this news I could be called enthusiastic.
.
--- Great Loss - Sufjan's album Carrie and Lowell has been streaming online for a bit now, I hope everyone's gotten a chance to listen to it and cry your self silly. I've still not stopped crying and I've been listening to it for weeks now! It will never end. There's a fine interview with Sufjan by Dave Eggers over at The Guardian - this is probably the best one I've read so far. It gave me the most complete picture of what Sufjan's family was like.
.

--- On The Lamb - In news about other waifish folksy indie musicians that I have giant crushes on (that's a bigger category than you'd think) Ari Picker, the great ex-lead of the great ex-band Lost in the Trees has composed a piece of music he's calling "Lion and the Lamb" and it's premiering down in North Carolina, which is where Ari's from. In this interview about it Ari has this horrifying thing to say about being a front-man for a band...

"I don't know where I sit anymore, but all I know is I can't tour anymore. I've lost my mind. Maybe I'll be a carpenter."


He always seemed super shy on stage but that was part of his charm! Oh I love you Ari, don't go. I don't care what he says, I refuse to believe Lost in the Trees are over. Refuse!
.
--- Sweet Song - A filmmaker named Andy Mingo is going to co-write an adaptation of Chuck Palahniuk's book Lullaby and direct it; apparently the two worked together on a short film adaptation of a story in Chuck's upcoming short story collection and they enjoyed each other so much they're doing it again. I am pretty sure I read Lullaby and remember absolutely nothing about it (save the basic storyline, which is usually the most memorable part of a Palahniuk book). All I want is an Invisible Monsters movie, dammit.
. 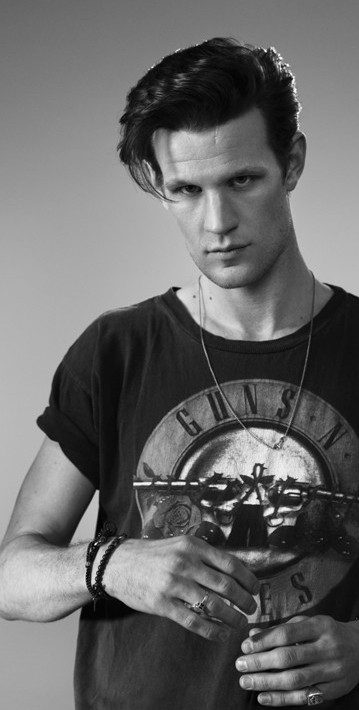 --- Brit Invasion - Former Dr. Who and gay-sex-enthusiast (at least on film) Matt Smith is maybe going to play the lead in the Harry Potter spin-off series Fantastic Beasts and Where to Find Them, about an adventurer who travels the globe looking for all those great animals JK Rowling came up with slash stole. Anyway with Dr. Who & Harry Potter smooshed up like this all it will take is one Spice Girl playing a witch and this movie will be too British too function.
.
--- Counselor Chaos - I keep seeing Nick Antosca, who just got hired to write the new Friday the 13th movie, credited as a writer on Hannibal, but IMDb has him listed as a producer of the show, not a writer. Anyway whatever he does for Hannibal I feel like that's a wonderful connection to carry over to Jason Voorhees. Let's hope he can do for that masked maniac what Bryan Fuller did for the cannibal!
.
Who? Jason Adams When? 4:31 PM