--- Pitt Stop - The sourcing isn't the most reliable (British tabloids, yo) but I like the rumor that Brad Pitt could star in the second season of True Detective enough to toss it out here all the same. Brad Pitt is ten times the actor McConaughey is and you can quote me on that - I'm not even exaggerating. Save some bright spots (the thing was beautiful, and Woody Harrelson was very good) I thought the first season of TD was pretty much from start to finish insanely over-rated, but they're planning on changing things up enough from season to season that I'd be willing to give it another look.

--- Gloved One - Yesterday came word that Lupita Nyong'o may take a role in Jake Gyllenhaal's upcoming boxing movie called Southpaw; I wrote up some words about that over at The Film Experience. I love the suggestions in the comments over there that Lupita should be playing basically ALL of the parts in the movie. As long as I get Jake shirtless and ripped in the ring, I'm good.

--- Rah Rah Rah - I was just wondering yesterday when I heard that news about Edgar Ramirez taking the lead in the remake of Point Break what Kathryn Bigelow has been getting herself up to lately, and it didn't take long for an answer to present itself at all - she's set to make The True American, which will star Tom Hardy in the true story of a self-appointed vigilante (read: terrorist) who murdered several immigrants in Texas after 9/11. So this should go over lightly, just like her last picture did. The movie's based on a book which just came out ten days ago. Anyway Hardy plus Bigelow sounds like a dream team.

--- Been Broughten - He's impossible to keep track of all the way to a finished product these days but there's word that the next big maybe for Drive director Nicolas Winding Refn is a horror movie! It'd be called The Bringing and it's about mysterious happenings at a real-world LA hotel. Think The Shining meets Somewhere! And then stare confused into the distance for a bit. 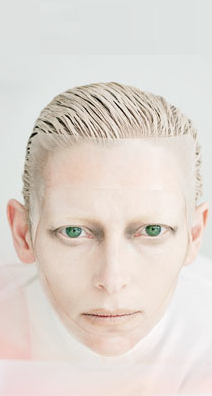 --- Pussy Galore - Tilda Swinton is re-teaming with her Teknolust director Lynn Hershman (this will actually be their fourth film together) for something called The Infinity Engine, in which Tilda will play, and I quote, "a phosphorescent talking cat ... on a search for freedom, enlightenment, and humane humans in the halls of a biotechnology company." Naturally. What else would she be playing?

--- Killer Crowning - Today's the final day of Maniac Madness over at Final Girl! Ahhh!!! Run over there and vote - the terrifying final two-some are a golden pair of lovely beasts and I don't know how the fuck you're supposed to choose, honestly. Toss a butcher knife in the air and see if it lands in your face or your heart, I guess.

--- Moore to Mock - A couple of Julianne Moore related things - The Playlist has the first couple of images of her as President Coin in the final Hunger Games movie(s) Mockingjay, and she looks pretty perfect, methinks. That wig is INTENSE. And then there's word that Michael Shannon is joining the cast of Freeheld, that drama starring Moore and Ellen Page as a lesbian couple dealing with terminal illness and passing along pension. Now that's a movie trio.

--- Storming It - I'm fairly certain I've written about this movie before when all we knew was it was starring Idris Elba (really that's all we need to know) but Bastille Day now has a director (the guy who made the much-better-than-it-should've-been remake of The Woman in Black) and a leading lady in Blue is the Warmest Color's Adele Exarchopoulos. I have no idea what it's about but who cares, I'm in!

Still hoping that the Godzilla trailer is not a fake-out and that they have la Binoche dying a most horrible death for the longest time before being squashed by one of the big beasties.

And they play it over and over again during the end credits à la Howling II...

One of my coworkers RAVES about True Detective and says it should get all the awards it can get, she loves it. I put it on my Netflix account and will see it when it's available.

Ugh, "Julianne" Binoche?
I am now one pissed ! Lol

One pissed Romeo, I mean.

oh god good catch dk, I fixed it - it was because I was just typing Julianne Moore right before, I guess I got my wires crossed - HORRIBLE, HORRIBLE

Did you see this Vulture bit:

Each year at the Cannes Film Festival, Harvey Weinstein shows the press some clips and trailers from his studio's coming film slate, and this time, he came ready to tout movies like The Imitation Game, starring Benedict Cumberbatch, and Tim Burton's Big Eyes, with Amy Adams and Christoph Waltz. The general public will be seeing those trailers soon enough, but there's one bit of footage Weinstein showed today that he likely won't release unless your hashtag campaigns are really on point: a shirtless Jake Gyllenhaal workout video.

Weinstein had hoped to have Gyllenhaal there in the flesh to discuss his upcoming boxing drama Southpaw, but failing that, he presented Gyllenhaal's actual flesh, dimming the lights for a video meant to convey the actor's intense training regimen. We watched a bearded, ponytailed Gyllenhaal throw punches in the gym, grimace through sit-ups, and engage in countless torso twists meant to strengthen his six-pack. There was even a slo-mo pan up Gyllenhaal's heaving, sweaty, hairy torso. Could this minute-long beefcake clip be Weinstein's spoiler for the Academy Awards? Yes, yes it could be. I'm calling it now: Your Best Picture Winner Will Be Jake Gyllenhaal's Shirtless Workout Video.