The Enemy Of My Enemy Is My Self 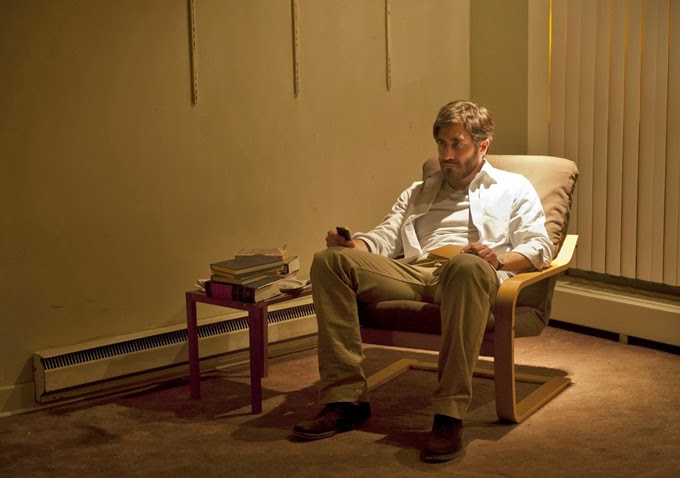 If I wrote a movie, the dream of what that movie would be, could be, is Enemy. Ninety minutes of mind-fuck starring an often half-naked Jake Gyllenhaal sinking into a surreal city nightmare laced with arachnophobia and identity issues? So did you just scoop out my subconscious while I was sleeping and smear it across a strip of film or what, Denis Villeneuve? And they done José Saramago's book proud, and then some.

Sliding in comfortably between Cronenberg and Lynch, take in Toronto all encased in amber. Arachnid legs flutter like eyelashes on semi-indistinguishable blondes - blondes so blonde they melt into one another, puddles of vanilla cream, visions of light slinking across a smooth black tabletop. Legs, with legs, with legs. Buildings, made of soft cement and dark wooden beams, blink in and out like dying light-bulbs - the slow curve of a consummately round belly, hands pressing from both sides. To know you is to know you is to know you. Inside you. Your face sits on the inside of a motorcycle helmet - take it off, pass it along. Eyes, within eyes, fully black and bottomless. The perfect rendering of a reflection.

One thing I love about this movie is I'm pretty sure I've got the whole crisp hallucination of it figured out. It's not an impossible mystery box; yes its answers are sprinkled with inexplicable potions - eight-legged sphinxes wander about, and it will haunt the shit out of you - but it isn't a phony, posing up puzzles that it doesn't have answers to. There's a very basic something at its heart, and it's just circling  around it with beautiful, obsessive, unnerving enigmas - though we wander through the valley of the Uncanny, we will fear evils. I'll be willing to talk specifics in the comments if you've seen the film already and want to, but for here and now, we'll keep our kisses on its golden gooseflesh, exterior and awesome. 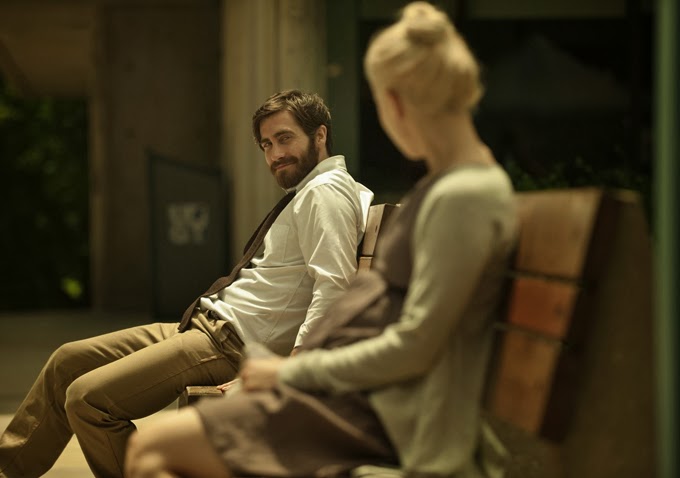 And that a beautiful/terrific last shot! :-)

This is a great review. I saw Enemy at TIFF but couldn't really describe it. I'm so glad you enjoyed it.

I watched it again on DirecTV, but I'm so happy I saw it on the big screen first. It does lose a little in the transfer. But you also get to rewind :)

Yes I'm glad I saw it on a big screen too (it played at Lincoln Center last night); that thought occurred to me while I was watching it, knowing it's on demand right now - it's SO BEAUTIFUL, and there are so many tiny little details tucked in corners of the frame. If anybody can see it on a big screen, DO

Wow you're really good at writing reviews, I can not wait for this movie

I had a ticket and then I realized I had tickets to a play and I went to the play and the play was terrible and I have so many regrets right now. Though Enemy is coming out in like two weeks so they're not big regrets, but it'll probably not look nearly as nice as it did on the Walter Reade screen. Effing sigh...

I like your review and get certain things about the movie, but just didn't understand the opening ie, the club etc.... nor the abrupt ending. Having read the interview with Jake that you linked to, I suppose I see it somewhat and had understood on some level, but still remains a little to vague for me. And the audience I saw it with was audibly mystified at the end. And not pleased. I don't think it bodes well for the films success.

You, my fine man, suffer from Stockholm Syndrome. You have, through torture and zero self respect, allowed yourself to not only identify with, but to defend your “enemies”. SNAP OUT OF IT!