You might think I'm doing this scene from the original Oldboy because Spike Lee's remake is out next week, but you'd be totally wrong, and you should slap yourself silly for being such an enormous fool. Slap yourself silly, cut out your own tongue, whatever. Just do it. Because I'm actually doing this scene from Oldboy for the reason that today is it's 10th anniversary! 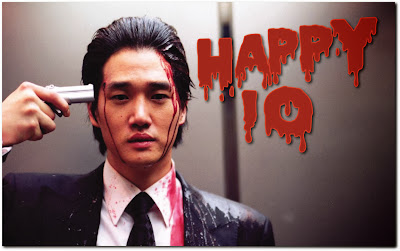 The second part of Park Chan-wook's Vengeance trilogy, sandwiched between 2002's Sympathy For Mr. Vengeance and 2005's Lady Vengeance, was released in South Korea on this very day ten years ago. I don't know how big the reception was to Park's films before Oldboy (besides Mr. Vengeance he'd also made the terrific border-thriller JSA: Joint Security Area in 2000) but Oldboy took him international - without it I don't know if we'd see him getting his meat-hooks into the likes of Nicole Kidman, that's for sure. 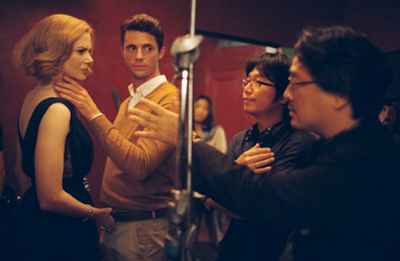 For all of this film's violence, and there is a whole lot, there actually aren't that many deaths in it - most of the guys seem to be writhing around, pained but still alive, at the end of its famous hallway sequence, for instance. Most of the deaths are spoilery and crammed at the end, so I decided I'd go with this poodle-cradling suicide gag from the film's early stages. It lets me give love to that shot of Oh Dae-su freaking that lady out in the elevator after all, which is one of my favorite moments from the movie. We've all been there! (Links to all of the previous Ways Not To Die are after the jump.)