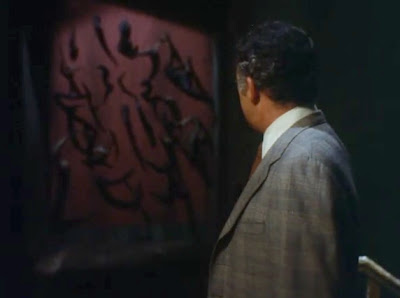 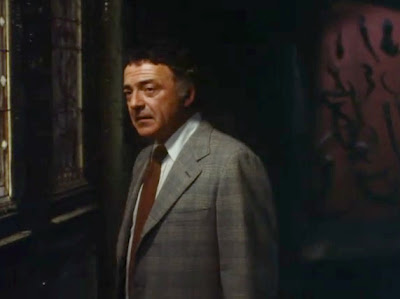 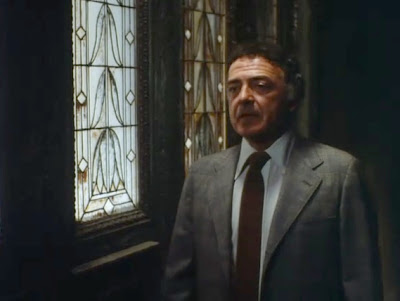 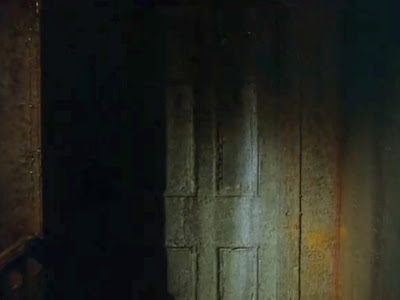 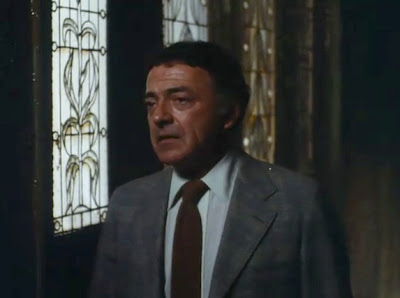 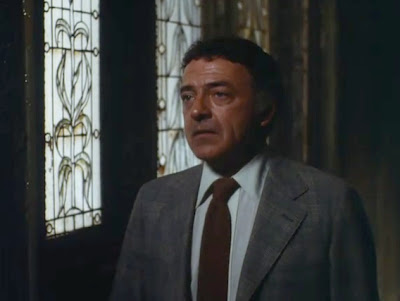 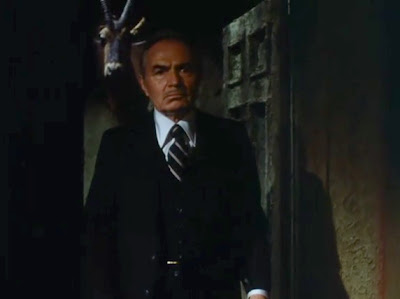 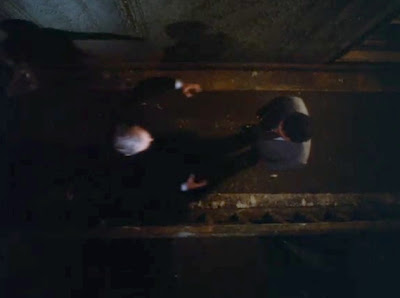 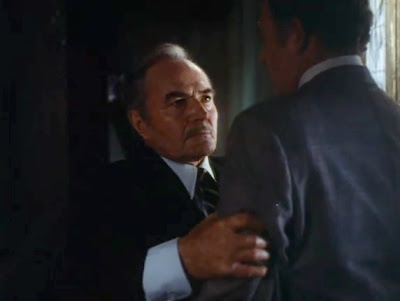 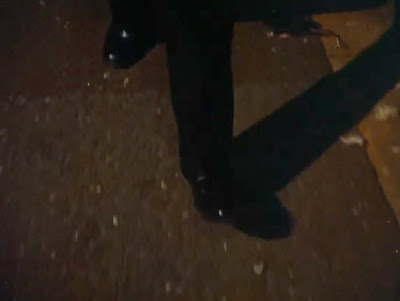 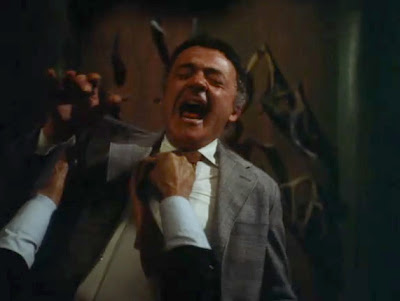 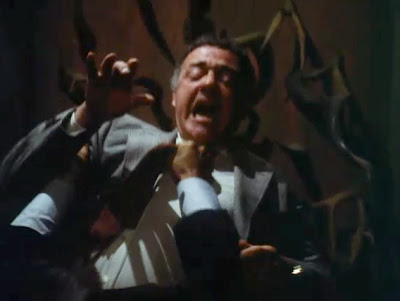 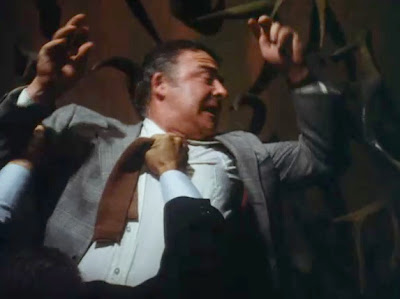 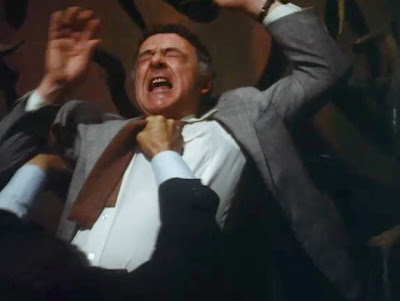 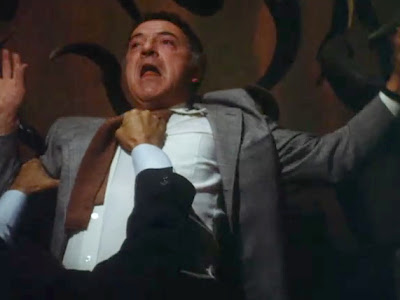 
It's been a shamefully long time since I've seen Tobe Hooper's Salem's Lot, which is by far the best out of all the television versions of Stephen King's stories, so I had totally forgotten about this scene until earlier this week whilst reading this interview with Bryan Fuller that I'd linked to, wherein he name-checks this as a formative moment both for him and for his new series Hannibal:

Buzzfeed: Let’s talk about some specifics. The crime that sets things off is a serial killer who impales his victims on antlers. We then see that imagery a lot. How did you arrive at it? And how did you think about showing it?

Bryan Fuller: In Red Dragon, there were a few pages about the Minnesota Shrike. And the Minnesota Shrike was a serial killer who was murdering young women in the Minnesota area. That was about as much as we knew from the books, so it was about coming up with a striking visual motif that could also serve as a psychological time bomb for Will Graham. If we’re going back to root inspirations for impalations on antlers, there are quite a few horror movies where we’ve seen antlers used as weapons in one way or another. For me, it was as a pre-pubescent lad in the Pacific Northwest, watching Tobe Hooper’s Salem’s Lot in the late ’70s, and being terrified when James Mason picks up a man and trots over to a wall of antlers and impales him. That image stuck with me as a 7-year-old. "

So this one's for you, Bryan!
That attic of antlers did seem awfully familiar... 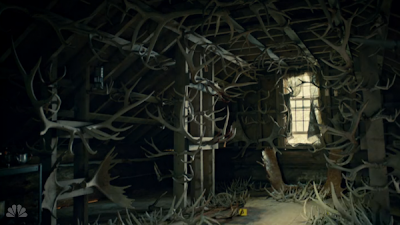 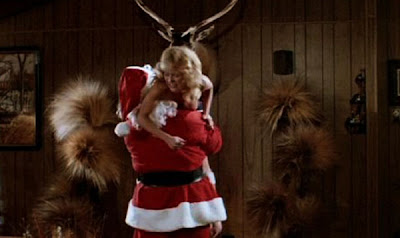 ... I personally first think of Silent Night Deadly Night when I think of people being killed with antlers. I've long wanted to do that SNDN scene for this series but it's so boob-heavy, you know? We're just not really the place for that. But bless the amazing Linnea Quigley - she's an icon.
.
.
But back to Salem's Lot - what this scene most reminds of watching it now is the first time we see Leatherface attack in Tobe Hooper's other white-meat masterpiece, The Texas Chain Saw Massacre. It's shot really similarly. You can watch the scene above, but here's a breakdown...

... he sees the presence of dead animals.

Which he heads towards.

And there he meets his maker.

And now that I think about it, bones
are awfully important to Poltergeist too... 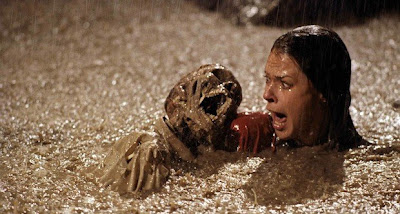 I don't know that we can say whether Hooper was working something out with this recurring motif or not; maybe he just found something that worked, and ran with it. But work it does, in the creep out way whilst totally resonating on a deeper thematic and symbolic level. DEATH IS HERE it says in big bold letters, yet his characters are drawn towards it again and again. Knock knock, let me in... 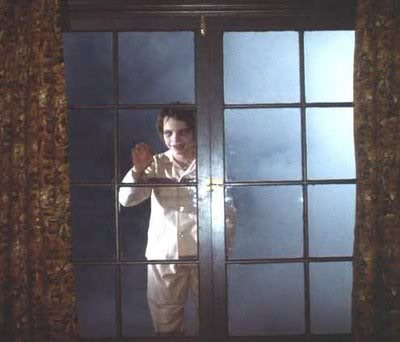 Links to all the previous Ways Not To Die after the jump...
--------------------------------------
Mistress-And-Run -- Wolverine Interrupted -- Who Let The Guts Out -- Zzzapped Innards-Side-Out -- Bad Romance -- Twas Beauty (And Also Aeroplanes) -- Bad Head -- Valentine's Day Massacred -- Belly Buster -- For Being Not The Babysitter -- Splat In Slo-Mo -- To Be Dis-Continued -- For Being Mouthy -- Do You Smell What Billy's Mom Is Cooking -- The Milk Done Gone Bad -- An Inability To Stop Drop and Roll -- Bug Sprayed -- Extreme Makeover: Leatherface Edition -- Window Seat Suck -- Razor Bunting -- Stabbed Thru The Heart And Witches Are To Blame -- Shark Kibble -- Is That a Straight Razor In Your Trunks Or Are You Just Happy To See Me -- Bad Dates -- Fry Guy'd -- Super Battle Bystander Shrapnel Shred -- Staring Contest of the Dead -- Satanic Self Sacrifice -- Fist and Fortune -- Psychedelic Penis Slice To Window Toss -- For Crimes Against Accent -- Sacked -- Speed Bumped For Traffic Spikes -- Shark Versus Jet-Ski -- Hot Oil Treatment -- Tucked In By Jason -- Just A Pair of Snowbodies -- Poison Pellet Kibble Swap -- Dolly Disassembled -- Fire Escape Fall Out -- Unbuggered -- Tell 'Em Large Marge Sent'cha -- Blue Man Gooped -- Tongue Stung -- Now Wouldn't Cha, Barracuda? -- Leaving on a Rat Plane -- Panthers! -- Fashion Faux-Pwned -- "It's Just A Box." -- Blasted Pigeons -- Taunting Ahnuld -- The Too Hot Tub -- Beyond the Veil -- Sunken Prayers-- Super Crack -- Brains Blown -- Fur For The Boogens -- White Hot Bunny Rabbit Rage --Dragged To Hell -- The TV Van That Dripped Blood -- Don't Mess With Mama -- Heads Ahoy --Martyred For Sheep -- Heads Nor Tails -- He Loves Me Knot -- The Great Bouncing Brad --Miss Kitty's 8 Mishaps -- Boat Smoosh -- Meeting the French-Tipped Menace -- A Magic Trick -- Slick Suck -- We Who Walk Here Walk Alone -- Raptor Bait -- Kneegasm'd -- Dare to Dream in Fincher -- Reach Out and Throttle Someone -- De-Faced -- Voluntary Drowning -- Cross Borne -- Pulled Up Hell's Sphincter -- An Arrow Up The Ass - The Numerous Violent Unbecomings of Olive Oyl -- Ack! Ack! Zap! -- Baby's First Acid Splash -- Chop, Drop and Sashimi Roll -- Forever Rafter -- Can't You Hear Me Now? -- Daisies Ways #5 - Harpoony Side Up -- Acid Dip -- On a Wing and a Prey -- For Standing in the Way of Sappho -- Busting Rule Number Three (For The Purpose of Number Two) -- Daisies #4 - Window Dressed To Killed --Hands Off the Haas Orb -- Bullet Ballet -- A Single Vacancy at the Roach Motel -- A School Bus Slipped Thru The Ice -- Trache-AAHHHH!!!-tomy'd - For Mel Gibson's Sins -- A Wide Stanced Slashing --- Daisies Ways #3 - Scratch n' Snuffed -- The Victim of a Viscous Hit & Run-- Curled -- Kabobbed -- Daisies Ways #2 - Aggravated Cementia -- Boo! Nun! -- 2009's Ways Not To Die -- Bug Scratch Fever -- Daisies Ways #1 - Deep Fat Fried in My Own Unique Blend of 500 Herbs & Spices -- By the Yard End of the Stick -- Screwed From A Very Great Distance-- A Righteous Bear-Jew Beatdown -- Fisted By Hugo Sitglitz -- Xeno Morphed -- Fuck-Stuck -- A Vengeful Elevator God: Part 4 -- Lava Bombed -- The Cradle Will Rock... Your Face Off!!! -- The Food of the Nilbog Goblins -- The Slugs Is Gonna Gitcha -- Phone Shark -- Hide The Carrot -- Sarlacc Snacked -- Avada Kedavra!!! -- Hooked, Lined and Sinkered -- "The Libyans!" -- Axe Me No Questions -- Pin the Chainsaw on the Prostitute -- The Wrath of the Crystal Unicorn -- The Ultimate Extreme Make-Over -- Drown In A Sink Before The Opening Credits Even Roll -- The Dog Who Knew Too Much -- Don't Die Over Spilled Milk -- Inviting the Wrath of Aguirre -- An Inconceivable Outwitting -- The Five Point Palm Exploding Heart Technique -- Nipple Injected Blue Junk -- Your Pick Of The Deadly Six -- Thing Hungry --Don't Fuck With The Serial Killer's Daughter -- DO Forget To Add The Fabric Softener -- Any Of The Ways Depicted In This Masterpiece Of Lost Cinema -- Rode Down In The Friscalating Dusklight -- Good Morning, Sunshine! -- Mornin' Cuppa Drano -- The Cylon-Engineered Apocalypse -- Tender-Eye-zed -- Martian Atmospheric Asphyxiation -- Maimed By A Mystical Person-Cat -- The Sheets Are Not To Be Trusted -- Handicapable Face-Hacked -- I Did It For You, Faramir -- Summertime In The Park... Of A Pedophile's Mind -- A Vengeful Elevator God: Part 3 -- Strung Up With Festive Holiday Bulbs By Santa Claus Himself -- A Vengeful Elevator God: Part 2 -- A Vengeful Elevator God: Part 1 -- Decapitated Plucked Broiled & Sliced -- Head On A Stick! -- A Trip To The Ol' Wood-Chipper -- Pointed By The T-1000 --Sucking Face With Freddy Krueger -- A Pen-Full Of Home-Brewed Speed to The Eye --Motivational Speech, Interrupted -- A Freak Ephemera Storm -- When Ya Gotta Go... Ya Gotta Go -- Hoisted By Your Own Hand Grenade -- Having The Years Suction-Cupped Away --Criss-Cross -- Turned Into A Person-Cocoon By The Touch Of A Little Girl's Mirror Doppleganger -- Satisfying Society's "Pop Princess" Blood-Lust -- Done In By The Doggie Door-- Tuned Out -- Taking the 107th Step -- Rescuing Gretchen -- Incinerated By Lousy Dialogue-- Starred & Striped Forever -- Vivisection Via Vaginally-Minded Barbed-Wire -- Chompers (Down There) -- Run Down By M. Night Shyamalan -- Everything Up To And Including The Kitchen Toaster -- Sacrificed To Kali -- Via The Gargantuan Venom Of The Black Mamba Snake -- Turned Into An Evil Robot -- The Out-Of-Nowhere Careening Vehicle Splat -- "Oh My God... It's Dip!!!" -- Critter Balled -- Stuff'd -- A Hot-Air Balloon Ride... Straight To Hell!!!-- Puppy Betrayal -- High-Heeled By A Girlfriend Impersonator -- Flip-Top Beheaded --Because I'm Too Goddamned Beautiful To Live -- By Choosing... Poorly... -- Fried Alive Due To Baby Ingenuity -- A Good Old-Fashioned Tentacle Smothering -- Eepa! Eepa! -- Gremlins Ate My Stairlift -- An Icicle Thru The Eye -- Face Carved Off By Ghost Doctor After Lesbian Tryst With Zombie Women -- Electrocuted By Fallen Power-Lines -- A Mouthful Of Flare --Taken By The TV Lady -- Bitten By A Zombie -- Eaten By Your Mattress -- Stuffed To Splitting -- Face Stuck In Liquid Nitrogen -- Crushed By Crumbling Church Debris -- Bitten By The Jaws Of Life -- A Machete To The Crotch -- Showering With A Chain-Saw -- In A Room Filled With Razor Wire -- Pod People'd With Your Dog -- Force-Fed Art -- Skinned By A Witch -- Beaten With An Oar -- Curbed -- Cape Malfunction -- In The Corner -- Cooked In A Tanning Bed -- Diced -- Punched Through The Head -- Bugs Sucking On Your Head
.
Who? Jason Adams When? 1:13 PM