--- Supersized Thrones - When A Game of Thrones comes back for its third season this Spring, its episodes will be slightly longer - normally they run about 52 minutes apiece, and now they'll be 57 or 58 minutes apiece. The finale, they say, will be over an hour. Make it two hours while you're at it, guys! All in an impossible unholy effort to try and keep up with the gargantuan amounts of information in Martin's books that is slipping through the cracks. But hey, if they find some time to finally get Kit Harington outta his furs, s'all worth it!

--- Dog House - Noomi Rapace worked with Tom Hardy lookalike Logan Marshall Green in Prometheus, and for her efforts now she gets the real thing - she's in talks to join the real Hardy for Animal Rescue, an adaptation of a Dennis Lahane story about criminals and pit-bulls and hijinks, of my. 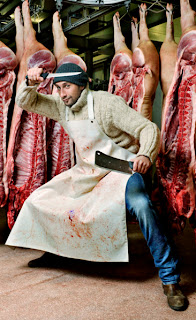 --- Big Matty - Slab of Belgian beef Matthias Schoenarts will be reteaming with his Bullhead director to make a film noir, or something like that, called The Faithful. I say "something like that" because it's still in the very early stages - still being written that is. Plus he's a big busy guy so we won't see this movie for a couple of years, I assume. He's also making a movie described as "Fargo meets Blood Simple" and they really know how to push my buttons, eh?

--- Low Hangers - Last week we saw Glenn's fifty favorite posters of 2012, and now we see his fifty least favorite, and man alive it's a buncha ugliness.

--- Spaghetti Stud - Franco Nero is going to play Django again! He's got a cameo in Tarantino's movie of course, but apparently he wants to make his own Django movie again. God if you've never seen how pretty he was in the first one, take a gander. Swoon. (And then check him out in a jockstrap. Double swoon.)
.
Who? Jason Adams When? 3:22 PM