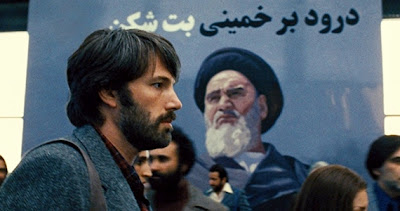 Oh, Argo. When I say you're the most accomplished thing Ben Affleck's done to date, you should be proud, you should hold your mop-headed period-appropriate noggin good and high. But you should also know that doesn't mean a whole lot coming from me. Generally Affleck's done a good job giving really good actors enough free rein to do some great work with (Amy Ryan in Gone Baby Gone, hooray), but his movies as wholes, they aren't lighting me up. They exist in my mind as a half-remembered murk... nothing much worth revisiting.

I mean here in Argo there are bits - like everything involving John Goodman and Alan Arkin in the last thirty minutes - that are just downright embarrassing. When the two of them start dancing with triumphant glee in the middle of the studio set, I felt like taking you aside, giving you a stern little talking to. And as great as he looked in that brown polo, Ben Affleck's entire range of emotions on-screen can be probably be best expressed by the lyrics to that old Pepto Bismal commercial. If ever there were a face one could label "Slightly Amused Constipation," his is the standard-bearer. 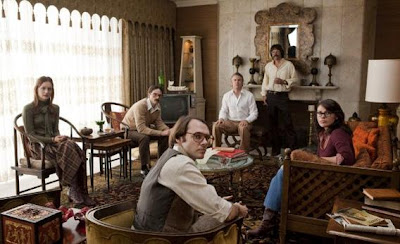 But then, all of your scenes with the six hostages are completely compelling. Did I ever think I'd be singing the praises of a man named Scoot? No I did not. But he's absolutely terrific here, as are Clea Duvall and Tate Donovan and all of the rest of them. (Victor Garber, holla!) Fine actors that Affleck just stands out of the way of and let's fill in what needs filled in gamely.

And you do put the audience through the wringer, tension-wise, especially with the off-hand little details that you let sneak up on us - that maid! Will she break? Will she escape? Who the hell knows? But I wanna! And there's a whole lot of fun to be had with the riffing on 70s sci-fi dreck that lightens the dire mood ably.

So hold your head high, Argo. But, well, not too high. High-ish. I mean, let's not get carried away, like thinking you deserve a bunch of Oscars or anything. Oh wait what's that the golden boy buzz is already buzzing all up in your period-appropriate underpants? Dammit, Argo!
.
Who? Jason Adams When? 5:18 PM
Labels: reviews, Scoot McNairy

This looks good, if I can get past the horrible hairstyles and clothes from the 1970s (and I was born in the 70's).

Likening Affleck's range to the old timey pepto-bismal commercial might be the best thing I've read or will read all week and is completely apt to the point of being scary.

Affleck is a better writer and director than he is an actor. That's a given. But I do think he's turning into an amazing director and I look forward to more from him.