Among The Amazing Spider-Man's faults, and there are several, I think I'm most annoyed at it for making me, in a post-Inception world, hold up Christopher Nolan as someone to emulate. But say what you will about the direction Nolan's gone - aka near to straight up his own ass - he at least found what felt like a good excuse for re-presenting - that is, presenting anew - the world of Batman. Batman Begins, for good (hey there Cillian Murphy) and for bad (not to knock a gal while she's down but hey there Katie Holmes), showed us a new Batman. It wasn't the dark but comic-booky Tim Burton take, it wasn't the garishly over-the-top Joel Schumacher take, it was its own thing.

The Amazing Spider-Man is coming so hot on the heels of Sam Raimi's trilogy that it needed more than anything to present us with a reason for re-presentation - if it wasn't just going to set itself in the world Raimi established (which is really how I think they should have gone) then it needed to give us its own thing. But The Amazing Spider-Man attempts to straddle - it's too similar to Raimi's world, but simultaneously too different, and all it ends up being is a whole bunch of neither. 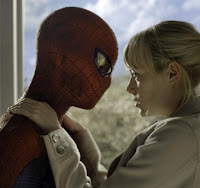 I just found the weird echoes too distracting. I don't spend much time in Nolan's two-so-far Batman movies thinking about the past films (this might change with The Dark Knight Rises since Catwoman is an awfully tough package for them to unwrap and find anything better than what Michelle Pfieffer already did therein) because he successfully navigated into his own space - Marc Webb plays out so much so similarly that all I was doing was comparing and contrasting, often to Amazing's detriment, since Webb is no Sam Raimi. I love watching Spidey sail through the city streets as much as any nerd but outside of having better CG for it there weren't really any moments that made me feel like I was flying like that first time Tobey Maguire tried his outdoors webbing skills. There wasn't much of a sense of discovery in general - things just happened.

On the other hand, Andrew Garfield is a much better actor than Tobey Maguire (and I like Tobey) - indeed Andy's so good he might be too good? At least I kept feeling that he was far better than the material he was being given to work with. His relationship with Uncle Ben is given what feels like five seconds to sort itself out before Ben goes bang bang bye bye and I really had no reason whatsoever to care, but Andy sold Peter's grief so well that the couple of tears he easily wrung from me came out flavored more with spite than any genuine established feeling. (Every tear screamed "Damn you, Andy!" as they rolled down my face.)

Similarly he and Emma Stone (speaking of somebody better than the material they're given) have sparkling chemistry, but scenes kept playing out like they were standing there smiling at each other being completely adorable while waiting for the scene to start. And waiting, and waiting. 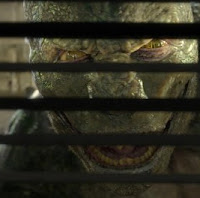 And don't get me started - Don't! Don't do it! Oh wait too late! - on The Lizard, a failed leather husk of a villain if ever there was one. I don't know if I really can express in words how very very much I disliked the look of him, but that was just an ugly unpleasant cg mush to have to stare at for two hours. I dunno if the designers ever read anything about Freud's "uncanny" effect but I hope not because they willfully misinterpreted it if so. And Rhys Ifans is an entirely capable actor that got saddled with leftover Doc Ock scraps, sans much of any romantic or emotional heft at all. (Maybe you can show me what happened to his arm, movie? Maybe that is important to the story you are telling since all of the drama hinges on that???)

All that said I think I would totally watch a sequel? If they can trudge themselves out of origins-ville and try to tell a new story, or you know, an actual story, with two very lovely very talented leads? I could absolutely be there. They've just got to meet me halfway. I think the halfway mark is "we have a story this time," right? Where's the line of demarcation? Is it at "we have a story this time" or is it at "Here are two more hours of Andrew Garfield in spandex, eat it up sucker"? I always get those spots confused.

The lizard on Teen Wolf this season is scarier than The Lizard in ASM.

Although give ASM its due; Andy is rocking Dominic Cooper levels of pants sag in a lot of the early scenes. I see Spidey, I see France ...

While I agree with you about The Lizard (urgh, although i knew THAT was a disaster as soon as they cast Danny Deckchair urgh Urgh URGH!), and the film was not without it's faults (goddammit Peter, keep the mask on/ really, Captain Stacy? Already???), I really enjoyed it and was happy to have a far more capable set of actors portraying the story. I look forward to the sequel, now that it's shrugged off the origin story. That being said, if I want a to rewatch Spidey's origin in the future, this will be my go to
(or, you know.....the 70s version :P)

Saw it yesterday and it was a perfectly ok nothing amazing film. It's a mixed bag that does some things better than the last trilogy and some not so much.

What I did like in this version was that the audience were given time to enjoy the motion sequences of spidey swinging through the streets of NYC. There was much greater scope and the movement was slower. In the last trilogy the sequences were so fast you never really had a chance to enjoy the motion with the character.

No mention of Chris Zylka hotness? I thought you woulda recapped that first thing!

I saw the film on opening day and I was disappointed with it. I love the people in it, but they didn't have that much to do. The script was lacking. I guess, Columbia didn't want the Lizard to look like Killer Croc.

What was up with Peter playing on his phone waiting for Lizard guy to come? Where did he keep that thing? In his ass?

Say what you will but I finally got a Spider-Man movie starring an attractive, charismatic and funny Peter Parker who doesn't detest his leading lady off screen and that means a lot more to me than...ugh the Lizard.

With that said, Batman Begins was pretty shit and it got better real fast (who am I kidding the only good thing about The Dark Knight was Heath Ledger!), so I have high hopes for a ASM sequel.

@Branden Renfro: If you knew anything, you'd know that Spider-Man wears a utility belt under his costume, this is also where he keeps his web cartridges.