A Song of Ice and Fiery Redheads

One of the biggest revelations for me watching George R. R Martin's A Song of Ice and Fire book get turned into a television series has been regarding the character of Sansa Stark. I had a really hard time connecting to her in the books - she's endlessly prattling about the fairy tale life she wants to lead and for a very long time refuses to accept that she doesn't live in that kind of world; indeed her daydreams of it lead her to make some really horrible choices that soured me towards her early. It didn't help that you've got my favorite character, her sister Arya, standing to her left being clever and strong and amazing every chance she gets - poor Sansa never stood a chance.

But then something happened watching Sophie Turner play her on the show - Sansa came alive, I understood her, specifically her place in this story and how important she is to it, in a way I'd never really gotten a fix on reading in the books when I just kept plowing past her stuff trying to get to the next Arya chapter. Now I have a feeling if I go back and read the books a second time, the Sansa chapters will feel a world different. Nowhere does Martin upend the fantasy notions of knights and damsels with sharper strokes of his pen than he does with Sansa - we see all those fairy tales turn to dust in her eyes around her. 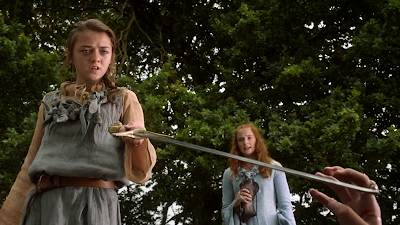 I'm no fantasy literature expert, I'm sure other writers have explored this stuff before, but Sansa come to feel revelatory to me now in the ways that she's not the Arya character - that she's not the tomboy tough-girl feisty fantasy girl that we've seen (and yes  loved) a thousand times over. Seeing modernization undo those  fantasy tropes through the eyes of a more typically feminine character, not relying on shooting her up with the more stereotypically "manly" traits  in order for her to make her way through this world - seeing a real exploration of womanhood in relation to what all these stories are about... well it's become for me one of the most incisive pleasures Thrones has to offer. I'm not attempting to equate manliness with toughness and femininity with weakness by any means here - Sansa has fought and battled to remain a survivor just as hard as Arya has. She's just using an entirely different skill set, one that feels exquisitely fresh to this sort of story. 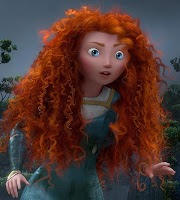 I bring all of this up because Pixar's new movie Brave really got me thinking about these things this week. Specifically because its heroine Merida, her bouffant of ginger slinkies ricocheting off her skull like a cheeto-encrusted Medusa, is the umpteenth fantasy heroine that we watch battle between these two sides of ladyhood - her desire to be FREE and WILD and shoot arrows and not get married ever to any stinky inadequate buffoonish boys, and her parent's desire for her to be a good little princess who wears corsets and doesn't put her bow on the table and gets married to a stinky inadequate buffoonish boy, stink and adequacy and buffoonery be damned.

And I found myself wishing Pixar had done a little bit more with it. It all plays out fairly straight-forward - we pretty much see the beats coming, the lessons everybody will learn, the ending point, from the start. It takes a couple of unseen zags that you don't see coming - I didn't for-see Merida's mother becoming so central, and everything they do in plotting out the women's relationship is sharp and fine - but I've come to expect the unexpected in storytelling from Pixar, and it kind of feels here like they were tentative with their first girl heroine, and what we get is another plucky boy-girl railing against her gilded cage with swords and gumption - it feels like the same old, by now.

That's not to say the film doesn't have merit. The hills and forests of Ye Olde Scotland are lush visions, from the rolling greenery to the whispering blue flame sprites that hide amongst the trees, it is a gorgeous world to lose yourself in. The voices - well hell I could listen to Kelly MacDonald and Emma Thompson lilting loveliness for eons. There are some terrific gags - love the gang of flame-fro'd toddler triplets who pwn every hole and stone of the castle. There's also some real scariness to be had, which I always appreciate from a children's film - my happiest memories were from under my mother's arm, half scaring at the screen, eyes bulging.

I was pulled in by the film with fair ease, but eventually it seemed unsure where to go, and ultimately I don't think it really ever found a path of its own. The stakes should seem higher - especially since they are very high! - but it whiffs on making the rules clear; it becomes a series of stumbles towards the next scene, disjointed, with an emphasis on gags that deflate and distract more than they to the narrative tension. And Merida, chin chasing forward to signify spunk, gets lost somewhere under that orange whirlwind of curls. 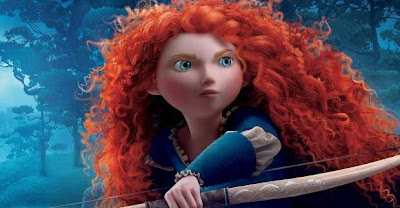 Labels: A Song of Ice and Fire, Pixar, reviews

"...its heroine Merida, her bouffant of ginger slinkies ricocheting off her skull like a cheeto-encrusted Medusa..."

That right there? Is a metaphor for the ages.

I agree with you Sophie Turner is amazing playing Sansa Stark.If you re-read her chapters you do realise that she gets stronger as the story goes on.She finds some courage throughout the books.Im not talking about the physical strength but the mental.Both Arya and Sansa are both exposed to the harsh truth of the world and Sansa seems to remain her moral intact despite all the bad things happen to her .Arya on the other hand does get darker and depressed and to a point losing her identity.Both sisters have been suffering since the beheading of Ned.
Jared I really recommend you to re-read her chapters.You will find many subtle hints of her growth as a character.She is no longer that naive annoying girl who left Winterfell.

You can say many things about Sansa (she's dull, stupid, ditsy, etc.), but the girl has got mad survivor instincts. Where her father, mother and oldest brother died because of their pride, Sansa knows when to bow before the storm and lives to be an pretty little idiot for another day.

I do agree with your write up of Sansa. She is honestly becoming one of my favorite characters. I have not read the books. But I'll take your word on it that Sansa can get annoying. She was pretty dull in the first few episodes. Watching her go through the amount of constant torment from those around her in King's Landing is something else. Every single time someone presents her with a fresh hell, you really want Sansa to explode and snap back. You want her to put Cersei and Joffrey in their place. Arya certainly would as would all the other Stark children. But Sansa endures it. And she makes sure she says all the right things. Plus, she is the only one who saw her father get executed. This girl has got truckloads of trauma under her belt now. But she keeps on going.

I think Sansa really is the book's moral compass-I can think of only one time she seriously betrayed her values-not supporting Arya after the lake. And she payed for that with the death of Lady. But since then she has been honest and true when almost no one else around her has. And, BTW, Shane, that's a pretty big spoiler you just posted for anyone who's only seen the show.