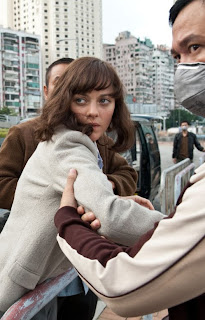 If I had my camera with me I would just post a picture of the giant bottle of Purell I bought on my way to work this morning and leave that as my entire review of Steven Soderbergh's Contagion. It would speak the truth as I see it in absolute and succinct terms. But unfortunately I loaned my camera away this week - and sidenote, I feel so helpless without it! What if I bump into Jake Gyllenhaal again? Ahh! (And sidenote to that sidenote: didja hear I actually bumped into Jake this past weekend? I did! Spotting number three! - so I've got to try this whole "writing my thoughts out in words" thing again. Boo! Who wants that?
Okay so... Contagion. Contagion pretty much gave me a full-on panic attack, and it's an unprofessional admission - although who the hell here's a professional anyway? - but the movie took me twice its running time to watch because I had to pause it every ten minutes or so and take a break. Not really the optimum way to view a movie, and Steven Soderbergh should probably slap me across the face with a single glove the next time we meet. But maybe he'd be impressed that his film had such an effect on me, and let it slide this time? because he should be. I certainly was impressed.

When Haywire came out recently I threw a lot of love at it, and I maintain that love even though after I wrote that early review I read a bunch of other people's reviews that argued convincingly about its shortcomings, and the shortcomings in the current status of Soderbergh's mainstream-experimental filmmaking. Why yes indeed, his movies are cold and clinical and more concerned with messing with visual and aural and linear expectations than with necessarily devoting their cold heart and laser eyes to just telling a richly-told-on-all-levels story. At this point he's playing - he can get anybody he wants to show up for five seconds, why wouldn't he?
But oh such play! I could watch Steven Soderbergh play with a narrative for days. (I also expect to be able to watch Steven Soderbergh play with Matthew Bomer and Joe Manganiello in thongs for days as well, but that's for another set of days.) And as sleek and relentless as Contagion is, I found it surprisingly moving too. When you've got Kate Winslet tremulously greeting the on-set of those first few coughs while staring at her reflection or Marion Cotillard being confronted by the duplicity of her own government in the face of sick children, or Matt Damon finally breaking down after stumbling upon the last pictures of his dead wife, when you've got actors this good still being allowed to stand there and do their thing amongst all that sleek relentlessness, then I'm feeling the best of both worlds, personally.

Not that anybody should doubt my commitment to sleek relentlessness. As my undying love for Michael Haneke attests, I can tend to favor the impersonal touch. A Cinematic misanthropy can speak to me, I will admit. So Soderbergh works for me. His rhythms are first rate, and his eye is incontestable. And this movie wound me up into a frenzy of germ warfare. It felt authentic, a vérité I could hardly take. Take for instance the scene where Matt Damon and his daughter finally leave their house after a frightened period of mourning only to find the world outside collapsing into chaos - the way it builds, from the glimpse of a small fire to the looting and screaming and running (not to mention all all that horrible hacking), it's a dreadful showmanship I felt fortunate (and more than a little sick, blessedly) to be shown.
.
Who? Jason Adams When? 2:19 PM

So glad you liked this as much as me. The way they handled the fate of the Kate Winslet character in an edit was so cold and so clinical that it felt like a punch to a gut. I always go back to that when I think of this movie.

Dude, that broke my mind. I didn't want to mention it in the review because I didn't want to get into spoilers like that, but it was on my mind while writing the whole thing. It's been on my mind all day. I really think this movie's been undervalued.

PREACH. Seriously, this movie's sort of great and it gets better upon rewatch. My single issue with it is the vaguest of ways it gets all judge-y, judge-y on Gwyneth the adulterer.

Anyhow, two questions: what did you think of Jude? A lot of people (okay, 3 people) I know thought he was awful, both the performance and the character. Which is odd, because I don't think he's THAT evil, and I think the performance - like all in the film - is good, maybe great.

Will you write any official thoughts on Griff the Invisible? It's so hard finding cohesive thoughts on it on the internet (not that the movie is cohesive, but whatever), but I'm curious to hear some thoughts. It's so odd, and weird, and yet sort of enjoyable.

"His rhythms are first rate, and his eye is incontestable" <<<-- THIS!

As much as I adore Winslet (and I do.. I have the restraining order to prove it!) this is Jennifer Ehle's film all the way. The whole film is a gorgeous evocation of competence and drive and intelligence, but Ehle takes all that and manages to create a prickly and memorable character. Frankly though, the whole thing should have been a six part mini-series which would have given a lot of the plot lines (Cotillard's in particular) some real space to breathe