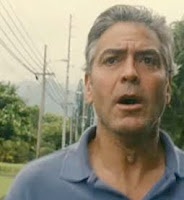 Even before director Alexander Payne had referenced both Debra Winger (he thinks Shailene Woodley, the young actress who plays George Clooney's teenage daughter, resembles Winger in her ability to exhibit both fire and vulnerability at once) and Jack Nicholson (who he worked with on About Schmidt) in the Q&A following the screening of The Descendants last night, I had Terms of Endearment on my mind from just the film itself. There are several bedside hospital scenes that brought it to mind, with all of the dull sterile waiting that scenery involves (not to mention the eventual screaming it invokes).
And sadly as a big Payne fan I have to say it's Endearment that comes out on top in that battle - at least it has a firm grip on its melodrama. The Descendants just doesn't seem to me to have that much interesting or new to say. There are nice moments, and the performances are fine - it's always great to see Judy Greer and her moment to shine straddles that weird funny but not funny line I wanted more of; Matthew Lillard was an inspired pick that zigs instead of zags; and Robert Forster is terrific as a crumbling grizzly bear in high-waisted cargo shorts and socks inside sandals. The girls are both good, and Clooney has his moments. 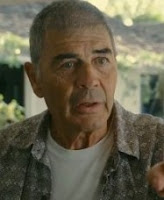 But I never felt like the film found much unique to say about these people. In his Q&A Payne said he's always looking for stories that dodge cliches, but this movie's layout seemed pretty certain from the start and I don't really think he filled in the quirks and corners well enough to make it stand out. Not to mention the voice-over is distractingly dull as voiced by Clooney - I suppose it's meant to get us into the groove of this slower Hawaiian lifestyle, but its affectless to a fault.
.
Who? Jason Adams When? 2:32 PM
Labels: Alexander Payne, George Clooney, reviews

When people ask me what I thought of this, I don't know how to say it. I am a big fan of Clooney, and I think he's probably the movie star we have that does the most with his essence and his star wattage. I enjoyed the experience of seeing the movie in a kind of 'catch it on HBO on a rainy Sunday afternoon' warm blanket kind of way, but it all felt a little on the surface for me.

I wanted at least one more scene with all of the supporting characters (Lillard, Greer, his daughter's boyfriend, Robert Forster, Beau Bridges) for their arcs to REALLY pay off. As it was, when it ended I couldn't help feel a little unfulfilled.

"I am a big fan of Clooney, and I think he's probably the movie star we have that does the most with his essence and his star wattage."

Totally agree about this - I think he gives a wonderful performance in Michael Clayton, for example, with a really interesting spin on his megawatt charisma. But there really wasn't anything that curious going on here.

I agree. Terms of Endearment is an interesting comparison I wouldn't have thought of. In that film, you could really see and feel the connections between all of the characters. In The Descendants, not so much. We were told how they were connected via voice-over. And they never really acted how real people would act in that situation. (Yeah, I've been there.)

Yeah, I don't understand the people who are saying this is Clooney's best performance. I thought he was better in Up in the Air (when he had Vera Farmiga to bounce off of) AND Michael Clayton (which is probably my choice).