Let It Out, Laura Dern

When I watched the first episode of Mike White's new HBO show Enlightened the other night, I made a mental note after that hysterically off-the-rails awesome opening scene where Laura Dern has her freak out to make the above gif. Course, when things are left up to my brain it's like throwing a hot dog down a hallway, never to be seen again. So thankfully yesterday MNPP reader Shane - hi Shane! - emailed me out of the blue saying that I ought to make the above gif and I was all, oh yeah! I wanted to do that! So y'all thank Shane for keeping my hole-riddled memory churning, and for that wonder up top, because that's one of the greatest gifs ever created. 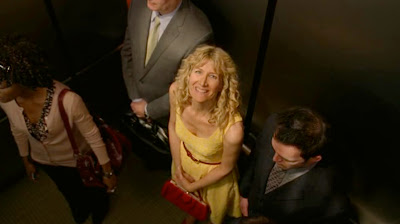 Anyway, what did I think of Enlightened? I liked it quite a bit, actually. It wouldn't be something Mike White created if he weren't walking a very fine line of making me uncomfortable, and I am definitely uncomfortable already with the spiritual stuff - god turtles! - but I trust him to leaven it with some acid, like he do. And Laura Dern is an hypnotic enough performer that whatever she does is an amazing spectacle to watch. 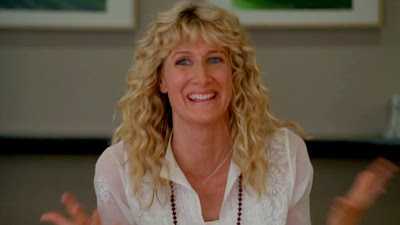 I don't really get the boys at Gawker's claim that the show felt grim without humor, because I was laughing my ass off an awful lot. That scene in the board-room where we watch the cunning side of Dern's character slip out from the seemingly dim sweetness was a marvel. I can't wait to see the depths they plumb from here on out.
.
Who? Jason Adams When? 12:35 PM

This calls for a "do, dump, marry" (or something similar) featuring Dern in "Enlightened", Collete in "Tara" and Linney in "C Word".
"Year of the Dog" could have been an amazing tv series, by the way.

Mmmm...I felt a bit different...I didn't get any big laughs and only a few chuckles....also, I didn't think she was cunning, I felt like she was trying her best to rise above all the negativity that's happening to her, so she occasionally slipped out of her hippie/new-age mode....but I was definitely intrigued to see what kind of direction the show is going...

I love the gif. I was very pleased with this show. The billboards with Laura Dern's distressed mascara-teared face got my attention. It's hilarious though. I love the part where she goes into Luke Wilson's place after they catch up and shouts "FUCK!"