I See A Sea God 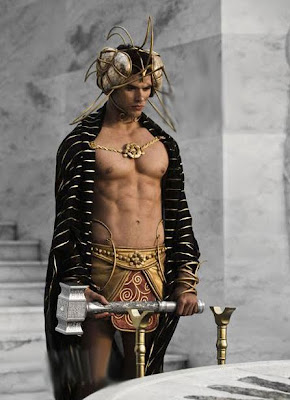 Finally, a good look at Kellan Lutz - or at least finally a good look at the parts of Kellan Lutz that really matter - in Tarsem's Immortals. (via) Save a flying blur he was absent from the film's trailer, and we'd only gotten one other official shot of him and that one was practically demure. We'd seen the rest of his costume on set back in the day and knew there'd be plenty to see once that happy day arrived. Hello, happy day! (Although I wouldn't argue with him ditching that cape at some point.)
ETA Here's a video of Kellan shooting his cover for Men's Fitness this month, aka him running and jumping and crunching and flexing while shirtless for a minute or so. S'up.
.
.
Who? Jason Adams When? 10:55 AM