The Speed For Need 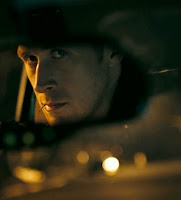 (mild spoilers ahead) I worried the other day that I couldn't figure out a way to talk about Nicolas Winding Refn's Drive without using a vast array of car puns. Now that I've seen it a second time, I know fighting that is useless. The film wants you to. It's the language it's speaking in. At one point in the film Albert Brooks and Ron Perlman, the two heavies, are arguing about the race-car Brooks just plunked down 400 grand on. Perlman can't believe he would spend so much money on something so unattractive, but Brooks argues that it's what's on the inside, the car's guts, that count. It might not be a huge showy pussy-mobile but if you're able to focus inward then you'll see the worth.

Drive is a focusing inward. It's an epically charged action-movie shot from under the hood. Every chance there is to go big, the film slows down, muffles the impact. If Michael Bay was addicted to laudanum and ate too much Chinese food before passing out this is what his nightmares would look like. The action buffed down to its essence and serving the purpose of an emotional reaction rather than a strictly visceral one. Oh there's viscera, there's plenty of viscera no worries, but it's no empty stylization.  Gosling's Driver character might not have a name or a history and he might not like to talk much, but he's always there in the present.

That's something I especially took away from the film with my second viewing, is just how much Gosling shades this dude with. The film plays with him being something like Clint Eastwood's Man With No Name - indeed, when you start paying attention it's this tension, this what's on the outside versus what's under the hood, that the film seems most interested in messing with. Gosling even slips on an eerie character-eliminating rubber mask for a couple of scenes to underscore it. At the screening I saw last night Refn was there and he said in his introduction to the movie that one of the most important components of the film is its use of "American mythology." Seems to me he's all about dissolving that fine line between American icons Clint Eastwood and Halloween's Michael Myers, which seems just about as perfectly American as apple pie to me.