That Time Luke Evans Talked About Being Gay 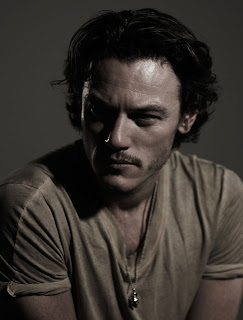 You might know the actor Luke Evans from Clash of the Titans, or Ridley Scott's Robin Hood, or maybe you saw Stephen Frears' Tamara Drewe, which is where he caught me eye. I was looking for Dominic Cooper of course, but when Dom wasn't on-screen Luke gave me something to see. Anyway I think he's generally recognized as an "up and comer." He's Aramis in the new Three Musketeers movie, he's Zeus in Tarsem Singh's Immortals opposite Henry Cavill, and he's one of the leads in The Raven, that movie starring John Cusack as Edgar Allan Poe.

He also starred in Boy George's musical Taboo back in the day, and had this to say in an interview with The Advocate around that time:

The Advocate: How did you decide you were going to be open about your sexuality?

Luke Evans: Well it was something I'd spoken to a lot of people about, including my boyfriend at the time - we've broken up now - but at the time when I just got Taboo, I knew that even though my part was a straight character, everybody knew me as a gay man and, in my life in London, I never tried to hide it. I knew I was going to have to do interviews with gay magazines, so I thought, ‘Well, I’m going to have to be open’. It’s who I am. And if people don’t like it, then I don’t want their jobs. I've never been a very good liar, which is another thing...

Luke Evans: Well, it's not nice. Look at George Michael, let's say. I mean, he hid it for so many years, and then he gets found out in a really awful way... Y'know, you start a slippery slope downward, and I don't want to start that at 22. If that means I'm going to be a poor man at 60, then at least I've lived a happy, open, gay life and not had to hide from anybody.

The Advocate: Do you think it might be different in the UK than in America?

Luke Evans: Well, it depends on how big you are. It's not a big issue, and it's never going to be a big issue for me; whether I'm successful or if I weren't successful, at least I'll never have that skeleton in the closet they can rattle out. Y'know what I mean?

If Dominic Cooper and James McAvoy had a son, he would look exactly like him.

Luke isn't an American actor, that explains why he came out and I've never heard of him. It would be a big deal especially for an actor in this country.

being gay is great,Luke evans has proved that one cannot run away from oneself and self acceptance is happiness.

The old Hollywood cure for homosexuality: a SAG card.

Or maybe he's just found the one woman for him, like Tom "Glad To Be Gay" Robinson.

Either way, you can't hush up something that's been in print, not only in The Advocate but also in Gay Times (now GT).

Maybe Luke's really into this girl. He might not be exclusively gay. We can't judge him, it's his life.

Hey, some people come out at 22, some people come out at 32, nobody doubts Anne Heche´s bisexuality, now that she is married and has a kid (don´t follow her life much, sorry, nor gossip, that was a million years ago), so why cant this dude re-come out ten years later and more mature and realize he is indeed bisexual? Yet, most important, why the f is that our business? Good actor, cute guy. Let him live and sleep with whomever he decides to.

I agree with the post that said that he could of realized that he is a bisexual and not exclusively gay. I think sexuality is fluid and changes through out a persons life. Hey look at the Kinsey scale. It seems society has a hard time excepting a man as a bisexual and not a woman, it's a double standard.

I agree with the post that said that he could of realized that he is a bisexual and not exclusively gay. I think sexuality is fluid and changes through out a persons life. Hey look at the Kinsey scale. It seems society has a hard time excepting a man as a bisexual and not a woman, it's a double standard.

Um... yeah. I'm all 'bisexuality is awesomesauce!' and 'maybe Luke's sexuality is all fluid and stuff; stop putting him in a cage!', but come on now. Let's be frank: Luke has run back into the closet in exchange for a shot at Hollywood success. That he did so is super disappointing, but he's hardly the first nor will he be the last.

Still, people attempting to quell criticism of Luke, portraying him as a man better in touch with himself, might possibly first check if he calls himself bisexual now before they thrust that defense (and a totally valid one, usually) upon him. Which Luke wants no part of, by the way. New!Americanized!Luke thinks boy parts are totally icky and always has la la la paycheck.

He is definitely dating her. I have met her. Holly and Luke are an actual romantic couple, and she is not the first women to date him, either. So interesting interview...but clearly something doesn't add up. The guy has sex with women.

You know he doesn't owe it to anyone to be gay, bi or anythign else. The only person he needs to please is himself. Saying you think people should be accepted as gay, but then turning around and saying you don't accept him because he decided he isn't gay is just silly, isn't it? He isn't some political statement. he is a human being, and in the end his sexuality is no ones business.

Luke is not gay.......anymore, Holly turned him lol. Anyways IF he was gay and 20 years later decided he wants p@$%y that's okay by me. Its his life and if Holly's p*&%y makes him happy, I'm happy for him, he doesn't HAVE to be gay, I believe in freeness. I love Luke Evans