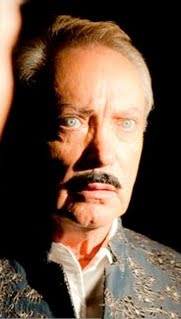 There are certain people in this world that are the real superheroes. The ones that I think I'd go blind if I were ever to see in person. Udo Kier is one of those people. He is one of the finest examples humanity has to offer - if space aliens come down and ask us for our leaders we should present Udo Kier, who will then kick them in the shins and lick the insides of their ears simultaneously. I adore him. The AV Club just got to interview him and it only cements this belief of mine. How can I quote just one passage from this instantly classic chat? I cannot. Here are fifteen.

"I like torture. Torture is photogenic. If you make horror movies, you always have to think what’s photogenic and what’s not. If you stay home with the candlelight and you read a book, Rilke, or whatever, or Sigmund Freud, it’s boring. But if you watch Udo Kier in a horror film and people are hunting me and trying to kill me, and there’s my love interest with big breasts and beautiful hair, and I believe in her and they kill me at the end, that’s more interesting."

"Andy Warhol was the most intellectual at that moment, and he got away with Dallesandro having an erection on screen, tied with a little bow, because it was art."

"Asia Argento, I think is one of the sexiest actresses there is, because she’s real. She’s not Sharon Stone, but she is real. She scratches herself if she feels there is a little mosquito hitting her. Sharon Stone would say, 'Stop the film! There’s some horrible animal trying to bite me!"

"I cannot answer you, because it’s totally unknown to me what you just asked me, and also very boring."

"So the first day of shooting I knocked at [Pamela Anderson's] trailer—which was enormous, as big as her breasts. So I knock and I hear from inside: “Hello? Come in!” So I stepped in the trailer and she was at least 25 feet away from me. So I went there and took both hands around her waist, which was like a transvestite, so small, and I said, “Wow! How amazing!” And I kissed her."

"I expected somebody like Kubrick or Fassbinder, all dressed in black and, like Fassbinder, touching their dick all the time, and greasy hair, and an intellectual image of “I give a fuck.” And then came a young boy in a sweater, and it was Lars von Trier."

"The Bible is wonderful. It’s only one book, but you can put two grams of coke on top of the Bible, and you first take a line of coke and then you open the Bible. Because then you understand." 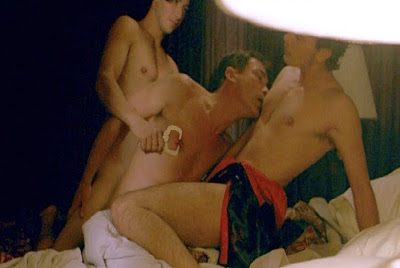 "Anyway, I was sitting in the corridor, and there were people up for the same part as me, and I heard through the glass door [bellowing Master Thespian voice], 'I was born like a vampire!' And I thought to myself, 'Oh my god, I better leave. Could I go to the store and buy an ice cream? And maybe I’ll buy a chair from Eames. Maybe I’ll make myself happy.'"

"Arnold, if you would ever listen to this, I will always protect you, because people are stupid to think that you are just muscles. I’m sure your wife wouldn’t have married you just because of your muscles."

"So I put it down in the projection room and I take a knife and open my stomach and take my sausages out, and into the projector and I press the button. And it runs, it goes 'flup, flup, flup.'"

What movie is that last picture taken from? I don't think I have ever seen it and I am a pretty big Udo fan! A little more information please!

That's from My Own Private Idaho, Sean.