Awww he's such a fucking romantic. A magazine recently asked Mr. Dyer how a bloke ought to deal with a recent breakup, and this is what he had to share (thanks Joe):

"I'd suggest going out on a rampage with the boys, getting on the booze and smashing anything that moves. Then, when some bird falls for you, you can turn the tables and break her heart. Of course, the other option is to cut your ex's face, and then no one will want her."

Danny claims he was misquoted by the magazine (although I'm having trouble figuring out which of any of those words he'd like to claim), and the magazine has admitted fault on their part. Oh, boys! They will be boys! I mean, obviously whatever he was going for here was a joke. It fits in with the puckish asshole image he seems to have crafted for himself (although we don't see any of his antics on this side of the pond; I just work at seeking them out because of my regrettable lust for him). But still, he just starred in a horror movie about a bunch of dudes in the middle of a plague that's turned all women into zombie bitches who they must now slaughter. 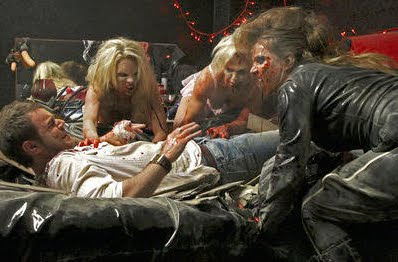 I haven't seen that film yet, but he might want to step away from the violent misogyny jokes for just a wee while. Perhaps?
.
Who? Jason Adams When? 1:26 PM

So, I don't know. I watched him in "Borstal Boy" and got all gushy when he kissed that Shawn Hatosy kid on the mouth, so I had to google him and find out what it was all about. I came across his quote, "It's sweet if you like your bit of cock," when reading about his ambivalence toward queers. It is sweet. It's even sweeter if you say it with an English accent.

Firstly, i like how even when people acknowledge the context surrounding the quote & that it was intended as a joke (not to be taken srsly) they still attack him for it (take it srsly). If the humor is too distasteful for you, then fair enough, you don't have to like it - but that doesn't mean no one else is permitted to like/appreciate it.
Secondly, it's ironic how people (typically feminazis) will whine over this, yet have no problem with women expressing graphic sexist jokes towards men in similar or identical circumstances ("rip his balls off, then no one will want him", or something).
Thirdly, "Doghouse" is clearly a satire of modern "ladish" sexism as well as an explicit metaphorical middle-finger towards the humorless, hypersensitive PC-brigade.
Lastly, Danny most likely participated in this film because he was desperate for work/money - the fact that he's currently on "EastEnders" is probably a testament to that.