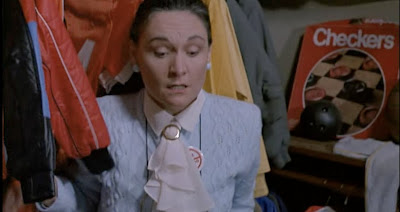 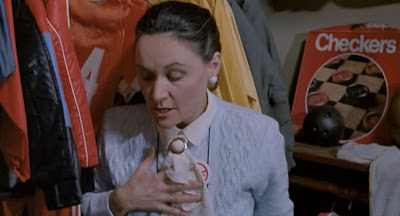 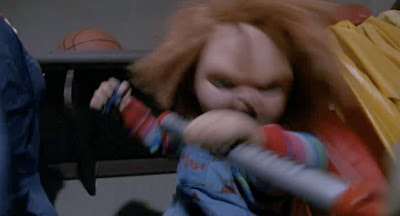 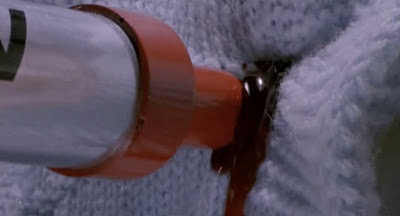 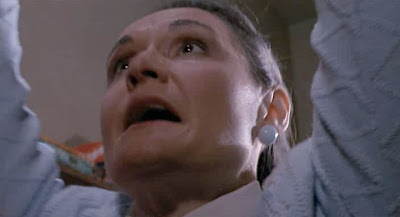 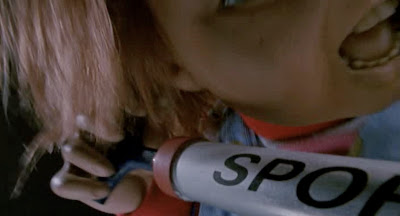 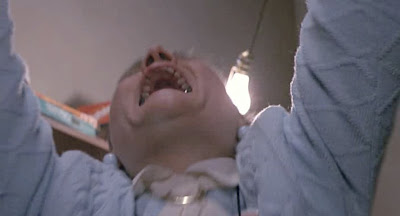 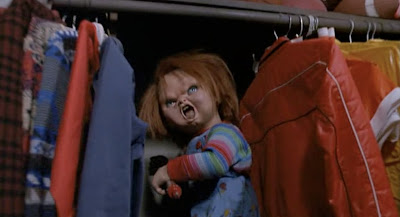 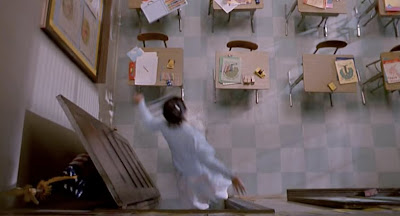 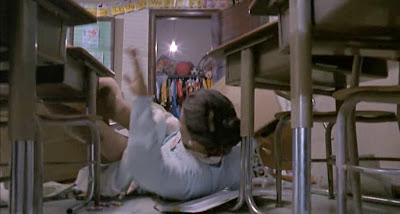 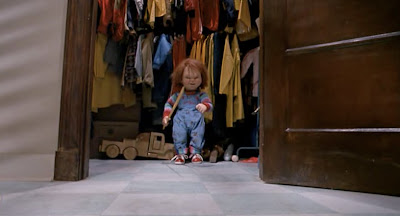 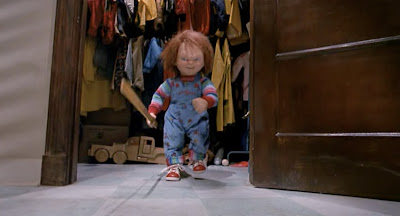 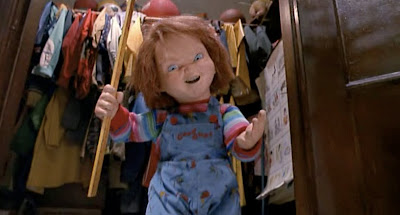 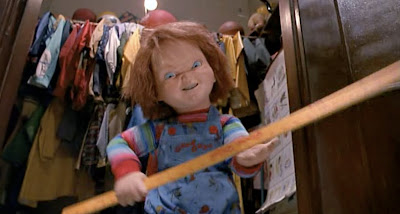 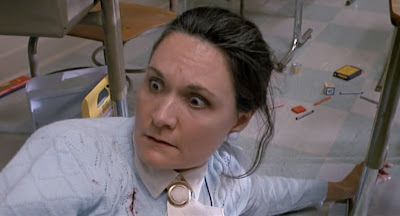 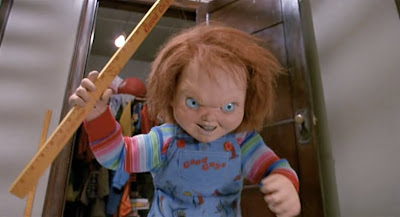 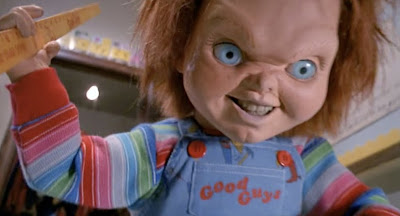 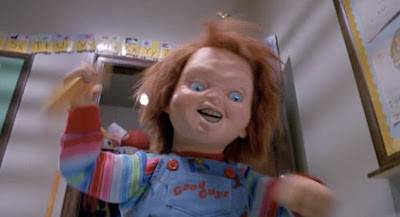 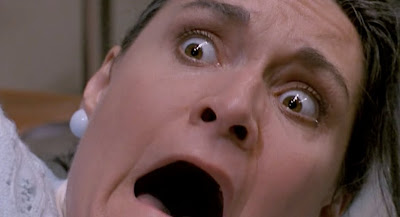 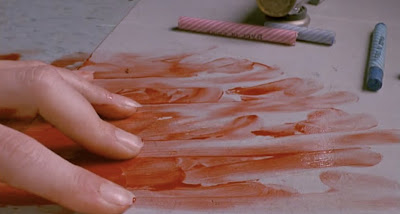 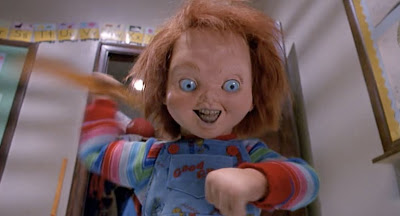 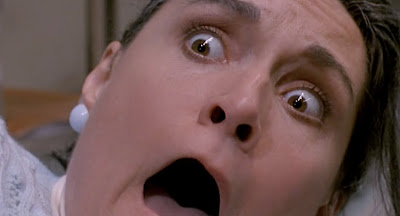 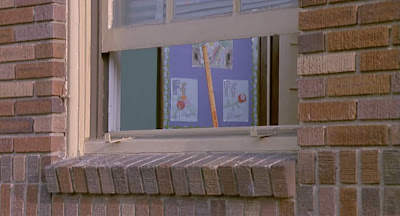 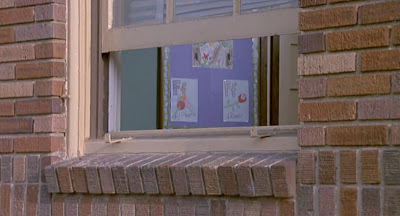 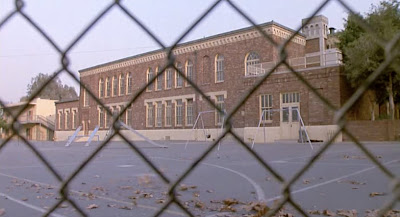 Child's Play 2 (199o)
It's so classy, that pull-out of the camera into the school-yard at the end, innit? That announces that this film is above showing off such vulgarity as explicit violence. I mean "didn't have the budget to" by "above," of course. But it is reminiscent of the scene in David Cronenberg's The Brood where the school-teacher's beaten to death by the snow-suited rage-babies with play hammers, right? And that sorta classes the joint up, a bit. 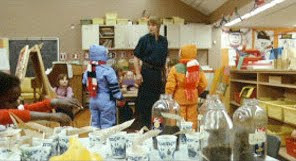 As classy an association as early David Cronenberg is,
which is to say, the total and complete inverse.
Early Cronenberg is where class went to die.
But let us move on to the real reason for this post: beloved Beth Grant, of course! In that interview she gave earlier this week with the AV Club that I posted about she reminisced about this scene... and, well, how I could I resist? Let me just quote her though, cuz naturally she says it best:

AV Club: Since we’re having all this high-minded talk about art, I’m going to be a jerk and bring up Child’s Play 2.

Beth Grant: [Laughs]. Hey, I love Child’s Play 2! I love Don Mancini. That movie has a great theme: You better listen to children. That’s why I wanted to do it. I was scared to do a horror movie—a blatant, studio horror movie—but I liked the script, and I thought that was such an important theme, because I don’t think adults listen to children enough. I didn’t feel listened to when I was a child, and I’ve seen other friends of mine with their kids, and they’re not paying attention while the kid’s trying to tell them very important stuff. But when I was considering doing it, even though I liked it, I still thought, “Gosh, should I do this big ol’ studio horror movie?” I’d just done Rain Man and a couple of other big movies, and I called my friend Dinah Manoff and said, “Dinah, what do you think about me doing Child’s Play 2? It’s about this little doll, Chucky”—and she said, “Well, if you see Child’s Play, you’ll find that I’m in it.” [Laughs.] She was the one that had gone out the window with a knife in her head or something like that. I felt like that was a sign.

AVC: A doll beating you to death with a yardstick—does that rank among your best death scenes?

BG: How do you beat that? Actually, he punctures my lung with a bicycle pump, and then he beats me to death with a yardstick. That’s hard to beat. There’s the one in Speed, and on Flatliners, I had a baby and came back to life. What else?

AVC: You were killed on Six Feet Under because you thought The Rapture was happening.

BG: Oh yeah, Six Feet Under was awesome! And you know, that’s an old urban legend. And then I had the heart attack while walling my son up in Angel. Those are all pretty good, but yeah, Child’s Play 2 is hard to beat.

Indeed it is, Beth Grant. I hadn't seen this movie since I was a wee one and re-watching the scene now brought back a flood of memories. Like the flavor of Ecto Cooler, and the scratchy surface of the velcro in my Trapper Keeper. Memories!

--------------------------------------
Previous Ways Not To Die: Screwed From A Very Great Distance -- A Righteous Bear-Jew Beatdown -- Fisted By Hugo Sitglitz -- Xeno Morphed -- Fuck-Stuck -- A Vengeful Elevator God: Part 4 -- Lava Bombed -- The Cradle Will Rock... Your Face Off!!! -- The Food of the Nilbog Goblins -- The Slugs Is Gonna Gitcha -- Phone Shark -- Hide The Carrot -- Sarlacc Snacked -- Avada Kedavra!!! -- Hooked, Lined and Sinkered -- "The Libyans!" -- Axe Me No Questions -- Pin the Chainsaw on the Prostitute -- The Wrath of the Crystal Unicorn -- The Ultimate Extreme Make-Over -- Drown In A Sink Before The Opening Credits Even Roll -- The Dog Who Knew Too Much -- Don't Die Over Spilled Milk -- Inviting the Wrath of Aguirre -- An Inconceivable Outwitting -- The Five Point Palm Exploding Heart Technique -- Nipple Injected Blue Junk -- Your Pick Of The Deadly Six -- Thing Hungry -- Don't Fuck With The Serial Killer's Daughter -- DO Forget To Add The Fabric Softener -- Any Of The Ways Depicted In This Masterpiece Of Lost Cinema -- Rode Down In The Friscalating Dusklight -- Good Morning, Sunshine! -- Mornin' Cuppa Drano -- The Cylon-Engineered Apocalypse -- Tender-Eye-zed -- Martian Atmospheric Asphyxiation -- Maimed By A Mystical Person-Cat -- The Sheets Are Not To Be Trusted -- Handicapable Face-Hacked -- I Did It For You, Faramir -- Summertime In The Park... Of A Pedophile's Mind -- A Vengeful Elevator God: Part 3 -- Strung Up With Festive Holiday Bulbs By Santa Claus Himself -- A Vengeful Elevator God: Part 2 -- A Vengeful Elevator God: Part 1 -- Decapitated Plucked Broiled & Sliced -- Head On A Stick! -- A Trip To The Ol' Wood-Chipper -- Pointed By The T-1000 -- Sucking Face With Freddy Krueger -- A Pen-Full Of Home-Brewed Speed to The Eye -- Motivational Speech, Interrupted -- A Freak Ephemera Storm -- When Ya Gotta Go... Ya Gotta Go -- Hoisted By Your Own Hand Grenade -- Having The Years Suction-Cupped Away -- Criss-Cross -- Turned Into A Person-Cocoon By The Touch Of A Little Girl's Mirror Doppleganger -- Satisfying Society's "Pop Princess" Blood-Lust -- Done In By The Doggie Door -- Tuned Out -- Taking the 107th Step -- Rescuing Gretchen -- Incinerated By Lousy Dialogue -- Starred & Striped Forever -- Vivisection Via Vaginally-Minded Barbed-Wire -- Chompers (Down There) -- Run Down By M. Night Shyamalan -- Everything Up To And Including The Kitchen Toaster -- Sacrificed To Kali -- Via The Gargantuan Venom Of The Black Mamba Snake -- Turned Into An Evil Robot -- The Out-Of-Nowhere Careening Vehicle Splat -- "Oh My God... It's Dip!!!" -- Critter Balled -- Stuff'd -- A Hot-Air Balloon Ride... Straight To Hell!!! -- Puppy Betrayal -- High-Heeled By A Girlfriend Impersonator -- Flip-Top Beheaded -- Because I'm Too Goddamned Beautiful To Live -- By Choosing... Poorly... -- Fried Alive Due To Baby Ingenuity -- A Good Old-Fashioned Tentacle Smothering -- Eepa! Eepa! -- Gremlins Ate My Stairlift -- An Icicle Thru The Eye -- Face Carved Off By Ghost Doctor After Lesbian Tryst With Zombie Women -- Electrocuted By Fallen Power-Lines -- A Mouthful Of Flare -- Taken By The TV Lady -- Bitten By A Zombie -- Eaten By Your Mattress -- Stuffed To Splitting -- Face Stuck In Liquid Nitrogen -- Crushed By Crumbling Church Debris -- Bitten By The Jaws Of Life -- A Machete To The Crotch -- Showering With A Chain-Saw -- In A Room Filled With Razor Wire -- Pod People'd With Your Dog -- Force-Fed Art -- Skinned By A Witch -- Beaten With An Oar -- Curbed -- Cape Malfunction -- In The Corner -- Cooked In A Tanning Bed -- Diced -- Punched Through The Head -- Bugs Sucking On Your Head
...
Who? Jason Adams When? 12:00 PM

I didn't know Beth Grant was in Child's Play 2. Mostly because I tend to ignore all sequels of any kind. Even Life During Wartime.

Well there ya go, Simon! Ya see what you're missing out on then? ;-)