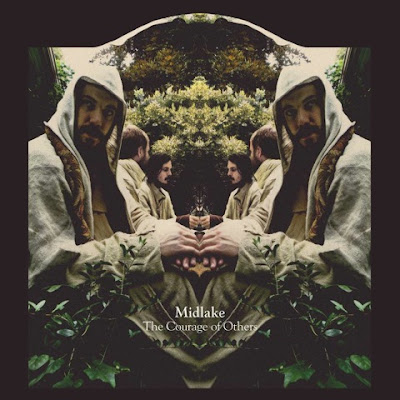 At the start of October I posted that the band Midlake's next album, three years in the making, finally had a title, that being The Courage of Others. Well now it's also got a cover, seen there above, as well as a track-list (via).

This news is itself a month old now - developments have been so slow coming with this record I'm not completely attuned to keeping track of them just yet. The band is also telling us to expect a change of sound:

"We didn't know exactly what we wanted, but we know we didn't want to make the same album as last time. We could have made 10 albums with the amount of time we've spent, but that doesn't mean they'd be saying anything great." Instead they committed to 40-hour work weeks in order to move away from the last record's "Fleetwood Mac-y America" with a shift toward, at least in part, "British folk scene of late '60s stuff."

so excited for this. their last album is still on repeat 3 years later haha. perfect for the change of seasons as well.