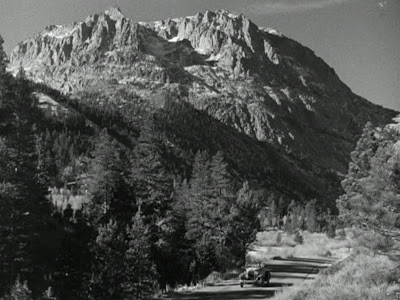 I realized as I took the screen-grabs for this one that it was gonna require some explanation as it went along. But that's fine, shake it up a bit, and I really wanna talk about this scene and this movie, reasons for which I will explain as I go along.
So the film is Jacques Tourneur's 1947 film-noir Out of the Past. I'm assuming most of you haven't seen it, although I hope you have, it's terrific. But since I'm assuming it's perhaps unfamiliar to many of you this is why I'm gonna explain what's going down more thoroughly than usual with these images. Obviously, this will involve spoilers, so y'all that haven't seen it oughta see it first or whatever. Or just let me take you on a ride through a pivotal moment! Again - whatever.

The film stars Robert Mitchum as a man that has escaped from his past into a new small-town life with a new gal... a new gal that's much less sinister than his previous dame that he'd stolen from a mobster. But said mobster finds him in is new small-town life and wants to blackmail him to do some dirty work and maybe get some revenge for referenced dame-stealing, yadda yadda, you get the gist. Everybody's got their motives! Anyway, in his small-town life, Mitchum has an... assistant? A rent-boy? I don't know, they never really make it clear what their relationship is or where the hell they met. But he's deaf-and-dumb and named The Kid (of course) and we come into this scene meeting him first. 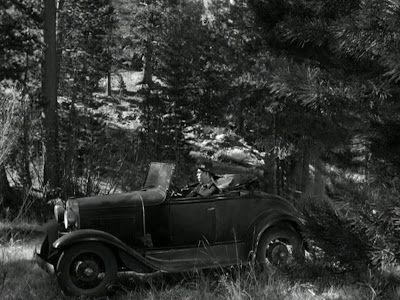 Just before this The Kid's met with the mobster's dame - she's back with the mobster now - and the mobster's dame's bodyguard-type, named Joe (of course). They're looking for Robert Mitchum too, but he's gone into hiding what with everybody wanting to kill him and frame him and what-not. The Kid met with The Dame and Joe for reasons given that I don't really remember, some sort of faux-pact-making hullaballoo - what the meeting was really all about (I think) was luring the mobster's dame's bodyguard-type named Joe out to follow The Kid from said meeting to where ever Robert Mitchum was hiding.

And a-ha! It has worked and Joe has followed. Silly wabbit. The Kid then makes pretense (I think) of going fishing, with Joe in pursuit. 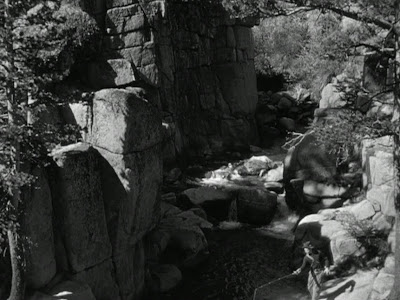 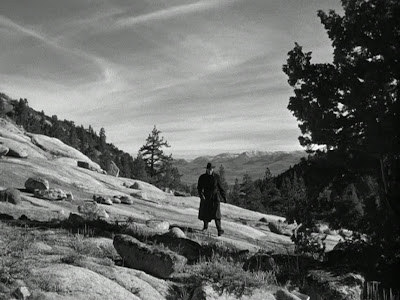 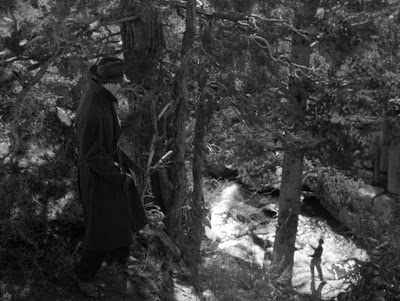 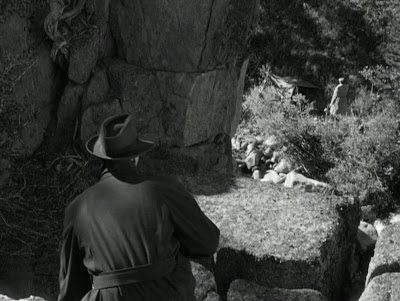 Ruh-roh! Joe's spotted Robert Mitchum,
who is holed up across the river. 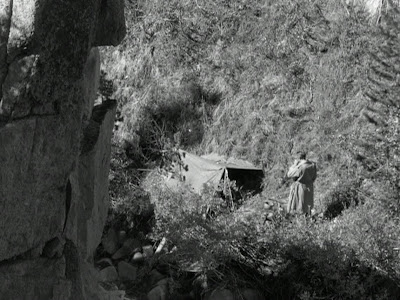 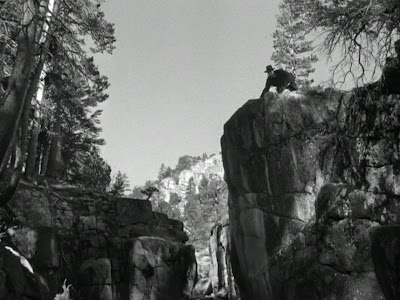 Joe decides the best place to scope out the scene is on the edge of a high deadly cliff of course. Where better to relax, whip out your pistol, and take aim? 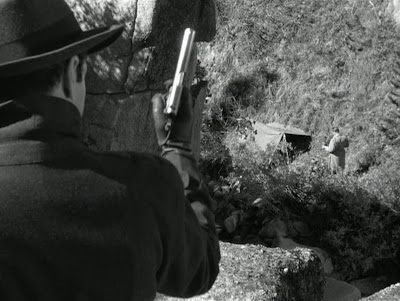 But lo The Kid has his own plan (I think)! He's spotted Joe and ain't gonna let his man-boss-pimp-john get shot like that no how!

Swing and a perfect catch!
Ya caught a big one, The Kid! 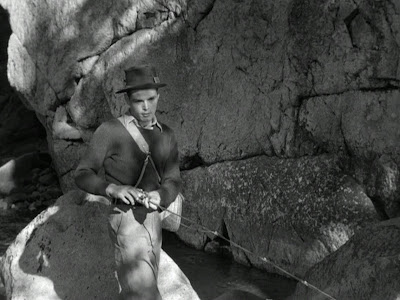 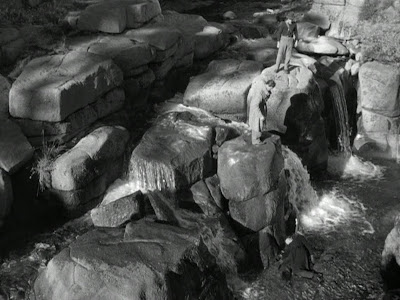 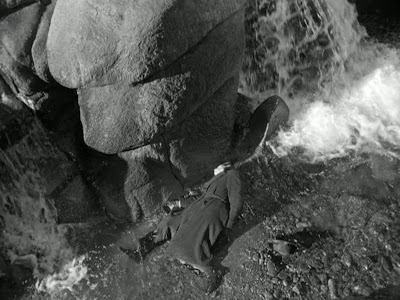 So I have some thoughts on this scene. Obviously. Why else would I post it? This isn't for my health, people! These are very important things! Ahem. So firstly, I kept saying "I think" when ever it came to this being a plan by Mitchum and The Kid because they never made it clear if it was or not. They'd shown themselves adept at maneuvering in the rules of this seedy underworld so far in the film so I'd like to think that they knew The Kid would be followed and that's why The Kid met with The Dame and Joe in the first place, to set a trap for Joe who's been a worthy adversary so far.

But if this was the plan... it's a really fucking ridiculous plan! Let's get this guy right up here, have him get a loaded pistol aimed right at my head, and then you will use your incredible fishing skills to hook him where he sits on the top of a cliff and yank him off the cliff to his fishy demise. Brilliant! 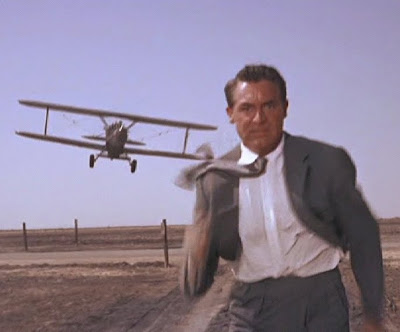 But it's utter ridiculousness reminds me of so many of the insane plans that populate Alfred Hitchcock's films (let's get Cary Grant in the middle of a field and send a crop duster - an eeevil crop duster - after him!) and so many others of this sort, and in the end it's the adventure, the excitement of the moment that matters and not the logic. The film follows its own internal logic, that this could be a plausible plan, and that's really what matters in these instances. Because what we get is a guy pulled off a cliff by a fucking fish-hook, and I like having experienced that in my life.

But besides all of that logistical and logical delight-riddled nonsense, what I mostly wanted to use this scene to illustrate is what a scam it is that its director, Jacques Tourneur, is not more loudly proclaimed to be the master that he most certainly was. Maybe I've gotten an askew version of his film-making prowess, I've barely even scratched the surface of all the credits he's got listed on IMDb, but I have a general rule that if a director has made 3 Great Films then he is a Great Director. Period. And Jacques Tourneur made Cat People, I Walked With A Zombie - read my thoughts on those two movies right here - and this movie, and I consider all of them to be Great Films. So where's his love? Well I'm gonna do my little part. Love! Love for you, Mr. Tourneur!

Seriously though, what made me want to use this death-scene for this series the most is how absolutely beautiful I find it to be shot. The entire film is beautiful to look at. As is Cat People and as is I Walked With A Zombie. And none of you should be turned off by the title of the latter - Zombie is a haunting, gorgeous film that everyone needs to see, especially before the remake comes out. 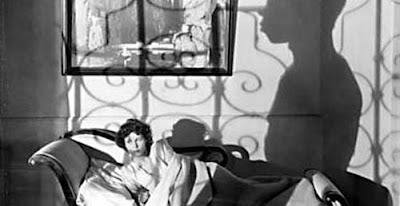 Tourneur was an amazing talent and ought to be celebrated as such. We should all shout it from the cliffs! Except the ones where deaf-and-dumb boy-men with fishing poles stand at the bottom. Avoid those ones.

--------------------------------------
Previous Ways Not To Die: "The Libyans!" -- Axe Me No Questions -- Pin the Chainsaw on the Prostitute -- The Wrath of the Crystal Unicorn -- The Ultimate Extreme Make-Over -- Drown In A Sink Before The Opening Credits Even Roll -- The Dog Who Knew Too Much -- Don't Die Over Spilled Milk -- Inviting the Wrath of Aguirre -- An Inconceivable Outwitting -- The Five Point Palm Exploding Heart Technique -- Nipple Injected Blue Junk -- Your Pick Of The Deadly Six -- Thing Hungry -- Don't Fuck With The Serial Killer's Daughter -- DO Forget To Add The Fabric Softener -- Any Of The Ways Depicted In This Masterpiece Of Lost Cinema -- Rode Down In The Friscalating Dusklight -- Good Morning, Sunshine! -- Mornin' Cuppa Drano -- The Cylon-Engineered Apocalypse -- Tender-Eye-zed -- Martian Atmospheric Asphyxiation -- Maimed By A Mystical Person-Cat -- The Sheets Are Not To Be Trusted -- Handicapable Face-Hacked -- I Did It For You, Faramir -- Summertime In The Park... Of A Pedophile's Mind -- A Vengeful Elevator God: Part 3 -- Strung Up With Festive Holiday Bulbs By Santa Claus Himself -- A Vengeful Elevator God: Part 2 -- A Vengeful Elevator God: Part 1 -- Decapitated Plucked Broiled & Sliced -- Head On A Stick! -- A Trip To The Ol' Wood-Chipper -- Pointed By The T-1000 -- Sucking Face With Freddy Krueger -- A Pen-Full Of Home-Brewed Speed to The Eye -- Motivational Speech, Interrupted -- A Freak Ephemera Storm -- When Ya Gotta Go... Ya Gotta Go -- Hoisted By Your Own Hand Grenade -- Having The Years Suction-Cupped Away -- Criss-Cross -- Turned Into A Person-Cocoon By The Touch Of A Little Girl's Mirror Doppleganger -- Satisfying Society's "Pop Princess" Blood-Lust -- Done In By The Doggie Door -- Tuned Out -- Taking the 107th Step -- Rescuing Gretchen -- Incinerated By Lousy Dialogue -- Starred & Striped Forever -- Vivisection Via Vaginally-Minded Barbed-Wire -- Chompers (Down There) -- Run Down By M. Night Shyamalan -- Everything Up To And Including The Kitchen Toaster -- Sacrificed To Kali -- Via The Gargantuan Venom Of The Black Mamba Snake -- Turned Into An Evil Robot -- The Out-Of-Nowhere Careening Vehicle Splat -- "Oh My God... It's Dip!!!" -- Critter Balled -- Stuff'd -- A Hot-Air Balloon Ride... Straight To Hell!!! -- Puppy Betrayal -- High-Heeled By A Girlfriend Impersonator -- Flip-Top Beheaded -- Because I'm Too Goddamned Beautiful To Live -- By Choosing... Poorly... -- Fried Alive Due To Baby Ingenuity -- A Good Old-Fashioned Tentacle Smothering -- Eepa! Eepa! -- Gremlins Ate My Stairlift -- An Icicle Thru The Eye -- Face Carved Off By Ghost Doctor After Lesbian Tryst With Zombie Women -- Electrocuted By Fallen Power-Lines -- A Mouthful Of Flare -- Taken By The TV Lady -- Bitten By A Zombie -- Eaten By Your Mattress -- Stuffed To Splitting -- Face Stuck In Liquid Nitrogen -- Crushed By Crumbling Church Debris -- Bitten By The Jaws Of Life -- A Machete To The Crotch -- Showering With A Chain-Saw -- In A Room Filled With Razor Wire -- Pod People'd With Your Dog -- Force-Fed Art -- Skinned By A Witch -- Beaten With An Oar -- Curbed -- Cape Malfunction -- In The Corner -- Cooked In A Tanning Bed -- Diced -- Punched Through The Head -- Bugs Sucking On Your Head
.
Who? Jason Adams When? 12:40 AM

It is such a good movie, isn't it?

I love this movie. It has the best hard-boiled dialogue ever.

Kathie Moffat: Oh, Jeff, I don't want to die!
Jeff Bailey: Neither do I, baby, but if I have to I'm gonna die last.

It's been a few years since I saw it, but I'd always assumed The Kid didn't know he was being followed, inadvertently led Joe to Mitchum's hideout, and then just improvised when he saw him. Mitchum looks totally shocked, which he wouldn't be if it all was a plan.