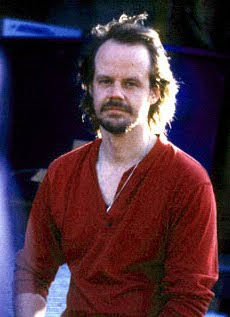 I have a real love-hate relationship with horror director Larry Fessenden's movies - I always want to love them, and I always appreciate what he's doing in theory, but I usually end up disappointed by the film overall. I'd say the most successful one that I've seen so far (although I still haven't watched Habit, his most widely praised film, even though I've had it for ages) is Wendigo, although even that enthusiasm is tempered by the silliness of the monster at the end (same problem with The Last Winter). But I do think Fessenden is a talented man and I thank the heavens that we've got a director (and producer) out there like him that's dedicated to being different even if it's hit-or-miss. Anyway, there's a great chat with him over at The AV Club and I need to share a rather long passage of it because it offers up some truths I totally am on-board with.

AVC: You said you have an allergy to pretension, and you have chosen to work pretty frequently in—and I say this with due respect and love—one of the most disreputable genres.

LF: Oh absolutely. I love it. I always say it’s only next to porn that you find the horror section in people’s minds. That’s what was beautiful about horror, is it really came from the underground and was the alternative storytelling until, basically, Halloween, when suddenly the studios recognized you can make a lot of money off of low-budget horror. At that point, it became co-opted, and most of the horror we see now is studio-based. That’s what’s so depraved, because they now, the studios themselves, are making these hideous images, where it makes much more sense when it’s coming from the alternative world. There is something about horror now that is rather disquieting. Though I would say most of the great horror directors still come out of the alternative world—like Saw, or something like that. Even though we can disparage the franchise, it was obviously a resourcefully made film.

AVC: The Saw movies are hardly great, but there is something oddly compelling about them.

LF: Well, like all good horror, the premise is awesome. Would you cut off your leg to unshackle yourself from the wall where you’re certain to die? That’s what is great about horror: It’s based in philosophy and the choices we make, albeit writ large. In that regard, I appreciate even the torture-porn movies. It’s just odd when you figure that Warner Bros. and the executives are behind this kind of truly awful imagery. That just is a little queasy-making. It’s one reason I enjoy being independent and low-budget. It feels like that’s where the stuff belongs.

AVC: Great horror works because it taps into real fears. The shower scene in Psycho is terrifying because there’s a real vulnerability to that situation: You’re naked, your eyes are closed, you can’t hear what’s happening on the other side of the curtain.

LF: The only horror that is worth going on about is that which comes from a genuine place and taps into our real fears. If it’s got a sheen to it, I must say, even a lot of the remakes, some of which are certainly well-constructed, chic-looking affairs, you just feel that it’s not the genuine exploration of dark places. It’s all laid out as spectacle. I feel that it makes the fans crave more horrific imagery, and doesn’t illuminate them. It’s really just like every other damn piece of our culture, just bludgeoning us and sickening our insight.