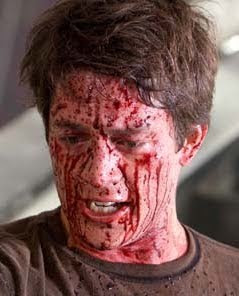 I have to keep this brief and spoilerless (ha, spoilers - here's a spoiler - lots of people die gruesome deaths!) since my boyfriend's out of town and hasn't seen it yet; we'll be going this weekend. Thankfully he understands that I would never ever wait for him to come back before going to this film myself. That's called love. But yay I get to see it a second time!
I mean... how do I rate this sort of thing? I understand this series' limitations. It's not art. It's about as lowbrow as you can get. But I don't feel guilty in the slightest about the pleasure it brings me either. I understand that these films are not for everyone, and I understand that the little bit of dialogue and plot that there is is perfunctory and poorly written and redundant from film to film. But plot and dialogue is not what these films are about and it's the good entries in the series that realize that. And there's no bones about it, David R. Ellis knows how to make a good one of this series. This one's easily my second favorite entry in the series after Ellis' Part 2 (which will never be defeated as a perfect distillation of What I Want To Watch Forever).

Clocking in at under an hour and a half and filled to the brim with devilishly sick set-pieces, and with plenty of viscera slapping you across the face thanks to the gloriously cheesy exploitation of the third dimension, The Final Destination only proved to me that I hope this series never ends, and never ever tries something outside of the formula it has perfected.

As far as I'm concerned, at this point they need to boil this shit's essence down even further! I don't need the leads to spend time figuring out what's happening. I want a lead that just runs with it from the first second. Fuck dialogue, man! Make these silent films except for the sound of meat hitting the pavement and the screams of doomed assholes running for their lives!
.
Who? Jason Adams When? 10:50 AM

Haa. Your enthusiasm makes me want to have liked it more than I did, but to me, it certainly had its moments, but didn't measure up. Though I haven't seen #3 in a while.

The thing was, I thought they set up some awesome deaths, but they way they actually went down weren't that cool!

Like, a rock through the eye, after all that buildup? I get the joke, that it was a big fakeout, but the that was lame. And just sort of getting hit by an ambulance, or set on fire... I dunno. It didn't match the tanning beds, or the choking in the shower, or the falling knives, or sign, or surprise bus of the previous movies.

Now, the chain-link fence? THAT was pretty sweet.

Yeah I have a feeling that even amongst those that love this series - we few, we deranged - that my reaction to the film is probably a lil' outta whack. I just... no matter how crappy the acting, how ridiculous the dialogue, I just love the series no holds barred. It makes me forgive so much. So while a logical place in my mind understands what yu're saying, Kirk, and perhaps even agrees, I can't and don't approach these movies with that piece of my brain. I purposefully shut off the part of my brain that allows for criticism, I think, actually. So I admit that my reviews for these movies aren't critically... responsible. But I don't care! I'll sing my unbiased love to the world and make everyone around me nuts! I love it all! Even the flaws.

And as for spoilers, YES to the sweet fucking chain-link fence! I saw it coming from a mile away, they couldn't have made the fence more prominent in that scene if they'd swing it off the screen and hit us in the face with it - OH WAIT THEY DID - but it was sweet effing pay-off all the same.

And they brought to life the grandest, grossest of all urban legends - the intestines pulled out the asshole from getting stuck to a pool drain! I mean... how can I argue that a film that does that is not The Greatest Movie Ever Made? I cannot. ;-)

And yeah, can't say I'd ever expect (or even want) some sort of unbiased critical breakdown, especially not of this movie! As you say, Final Destination love does not come from a rational place. It knows not the frontal lobe! It is of the Medulla, the oblongata!

I wish they would find a way to re-do the first three in 3-D, and release them as, like, a triple-header.

Because I would GO TO THAT.

(side note: the CAPTCHA code for this comment was "retender," which I am not sure is a word, though I now I totally want it to be.)

OMG it totally is a word. Score!

aaaand this time around, it's "eudingus." I'm just gonna go ahead and assume that that's a word, too. Glad to see that the CAPTCHA programmers are having fun today.