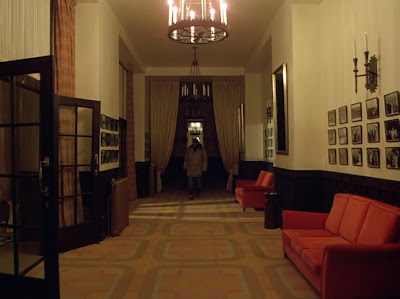 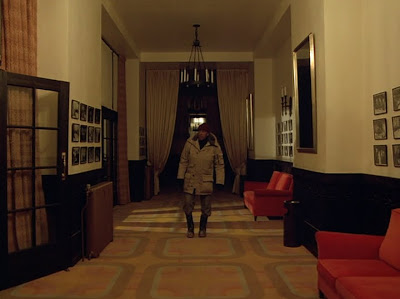 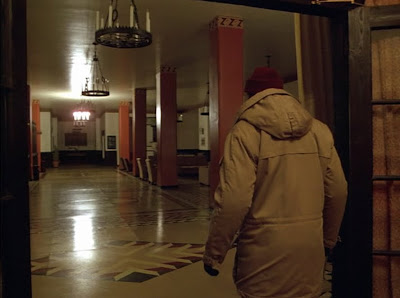 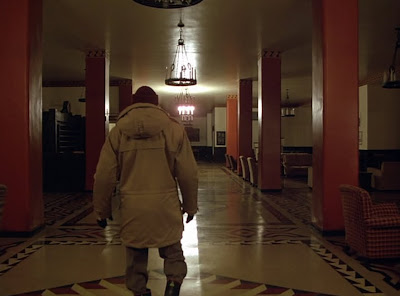 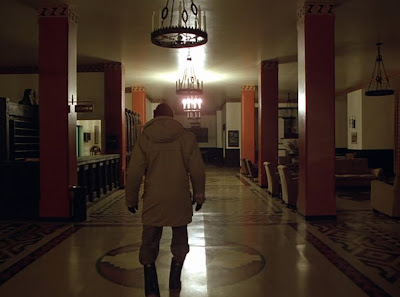 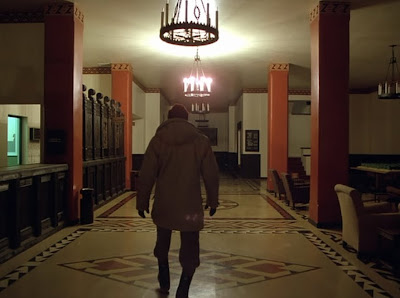 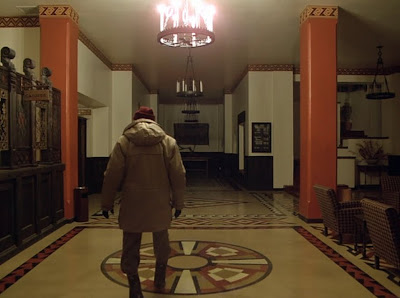 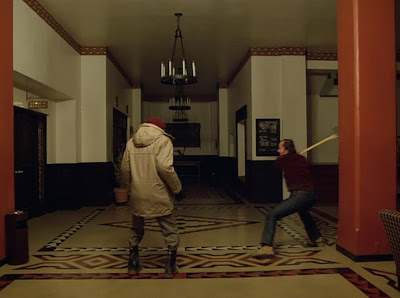 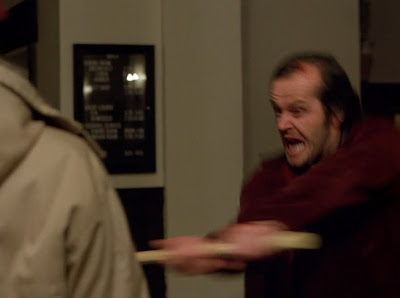 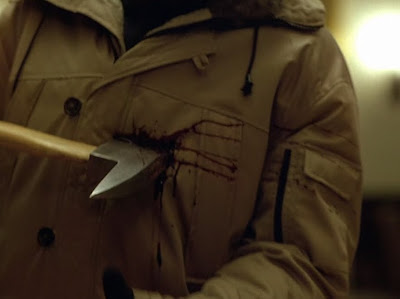 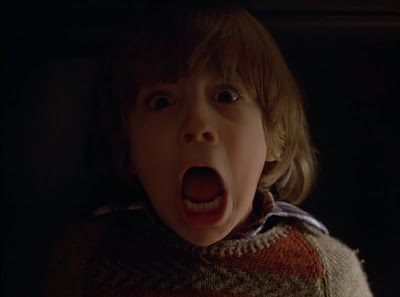 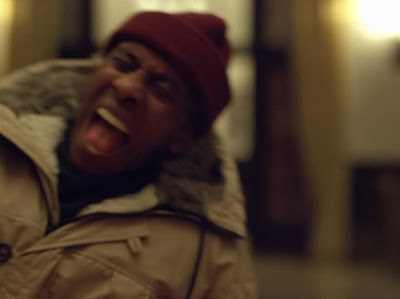 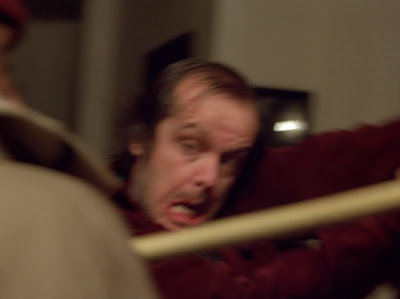 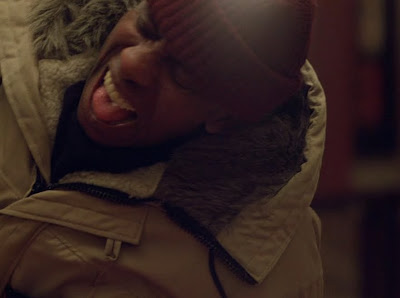 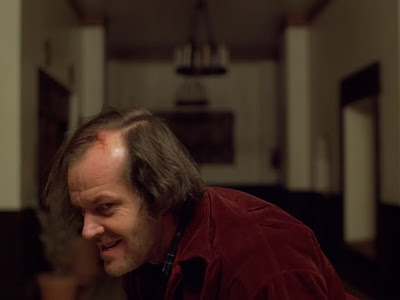 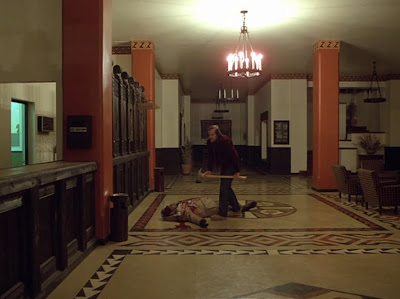 The Shining (1980)
This death scene easily could've been edited down to the last ten frames since that's where all the proper killin' happens, but where would we be without that long, long, long tracking shot that builds up to it? And the way that we've walked through this entire space with him, seen it from several angles, and still Jack Nicholson just pops the fuck outta nowhere, right there next to him, wham. Wicked. And even though I knew it was coming, even though I've seen this movie a dozen times over, I still jumped the hell outta my chair while taking these frames. Love.

But speaking of "building up to it," the word "love" doesn't even approach how I feel about the role that Dick Hallorann plays in Kubrick's film. It's been years since I read Stephen King's book so I can't recall how the character plays out there (anybody familiar with it, please share in the comments), but the fact that he ends up amounting to nothing more than the world's biggest red herring here just delights me to no end. Watch as he and Danny-boy bond in the opening scenes! See them discuss their supernatural abilities! He opens up Danny's mind to what he can do. He warns of the darkness present in The Overlook. He communicates with Danny via their shared brain powers, finds out via that of the encroaching horror, flies across the country (with no shortage of banal travel-arrangements shown being made), battles an immense snow-storm, rides through the destroyed mountain passages in a giant Snow-Cat, walks in the front door, makes it across the length of one room and WHAM, axe to the fucking chest, dead. Love love love it. It's a middle finger aimed straight at Hope that stretches its long and winding way across the entire length of the film. So so good. 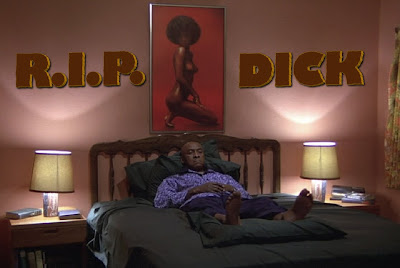 --------------------------------------
Previous Ways Not To Die: Pin the Chainsaw on the Prostitute -- The Wrath of the Crystal Unicorn -- The Ultimate Extreme Make-Over -- Drown In A Sink Before The Opening Credits Even Roll -- The Dog Who Knew Too Much -- Don't Die Over Spilled Milk -- Inviting the Wrath of Aguirre -- An Inconceivable Outwitting -- The Five Point Palm Exploding Heart Technique -- Nipple Injected Blue Junk -- Your Pick Of The Deadly Six -- Thing Hungry -- Don't Fuck With The Serial Killer's Daughter -- DO Forget To Add The Fabric Softener -- Any Of The Ways Depicted In This Masterpiece Of Lost Cinema -- Rode Down In The Friscalating Dusklight -- Good Morning, Sunshine! -- Mornin' Cuppa Drano -- The Cylon-Engineered Apocalypse -- Tender-Eye-zed -- Martian Atmospheric Asphyxiation -- Maimed By A Mystical Person-Cat -- The Sheets Are Not To Be Trusted -- Handicapable Face-Hacked -- I Did It For You, Faramir -- Summertime In The Park... Of A Pedophile's Mind -- A Vengeful Elevator God: Part 3 -- Strung Up With Festive Holiday Bulbs By Santa Claus Himself -- A Vengeful Elevator God: Part 2 -- A Vengeful Elevator God: Part 1 -- Decapitated Plucked Broiled & Sliced -- Head On A Stick! -- A Trip To The Ol' Wood-Chipper -- Pointed By The T-1000 -- Sucking Face With Freddy Krueger -- A Pen-Full Of Home-Brewed Speed to The Eye -- Motivational Speech, Interrupted -- A Freak Ephemera Storm -- When Ya Gotta Go... Ya Gotta Go -- Hoisted By Your Own Hand Grenade -- Having The Years Suction-Cupped Away -- Criss-Cross -- Turned Into A Person-Cocoon By The Touch Of A Little Girl's Mirror Doppleganger -- Satisfying Society's "Pop Princess" Blood-Lust -- Done In By The Doggie Door -- Tuned Out -- Taking the 107th Step -- Rescuing Gretchen -- Incinerated By Lousy Dialogue -- Starred & Striped Forever -- Vivisection Via Vaginally-Minded Barbed-Wire -- Chompers (Down There) -- Run Down By M. Night Shyamalan -- Everything Up To And Including The Kitchen Toaster -- Sacrificed To Kali -- Via The Gargantuan Venom Of The Black Mamba Snake -- Turned Into An Evil Robot -- The Out-Of-Nowhere Careening Vehicle Splat -- "Oh My God... It's Dip!!!" -- Critter Balled -- Stuff'd -- A Hot-Air Balloon Ride... Straight To Hell!!! -- Puppy Betrayal -- High-Heeled By A Girlfriend Impersonator -- Flip-Top Beheaded -- Because I'm Too Goddamned Beautiful To Live -- By Choosing... Poorly... -- Fried Alive Due To Baby Ingenuity -- A Good Old-Fashioned Tentacle Smothering -- Eepa! Eepa! -- Gremlins Ate My Stairlift -- An Icicle Thru The Eye -- Face Carved Off By Ghost Doctor After Lesbian Tryst With Zombie Women -- Electrocuted By Fallen Power-Lines -- A Mouthful Of Flare -- Taken By The TV Lady -- Bitten By A Zombie -- Eaten By Your Mattress -- Stuffed To Splitting -- Face Stuck In Liquid Nitrogen -- Crushed By Crumbling Church Debris -- Bitten By The Jaws Of Life -- A Machete To The Crotch -- Showering With A Chain-Saw -- In A Room Filled With Razor Wire -- Pod People'd With Your Dog -- Force-Fed Art -- Skinned By A Witch -- Beaten With An Oar -- Curbed -- Cape Malfunction -- In The Corner -- Cooked In A Tanning Bed -- Diced -- Punched Through The Head -- Bugs Sucking On Your Head
.
Who? Jason Adams When? 9:27 AM

It's been a while since I read the book but I believe that Dick doesn't die. In fact he's the one operating the snow mobile that gets them out of there. After the hotel blows up.

I remember being really pissed off that he was killed off in the movie. In fact, I absolutely hated the movie for about 25 years. Only recently have I been able to appreciate it as a great Kubrick film.

Kubrick made a good movie on its own terms, but it changed a TON from the book. Including, like, major themes, characterizations, events, the ending, et cetera.

Yeah, then Stephen King got a crack at it and made the TV miniseries based exactly on the book.

It's not a maze, it's animated murderous topiary animals! (er?)

Overlook Hotel goes boom in the end! (explosion as metaphor for rage ... who would have thunk?)

All three elements that were changed made the movie better and far more creepy IMHO.

See the novel-devotional TV movie starring the guy from Wings for proof positive....

Every time I watch him walk down the hall, all I can think about is how those boots make his legs look all wrong and wonky.