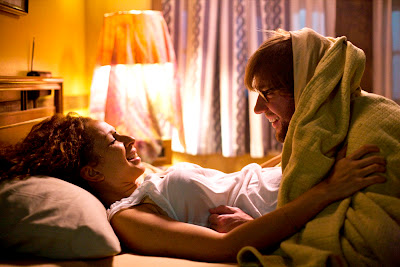 I went into Sam Mendes' Away We Go with the battle between A.O. Scott and Roger Ebert's reviews raging in my head. Scott argued that Mendes crafted a film that comes across as smug and superior and judgmental of everyone for not being so divinely perfect as John Krasinski and Maya Rudolph's characters are esteemed by the film itself. Meanwhile Roger Ebert directly attacked Scott's review in his own and told Scott directly - amusingly - that maybe Mendes' characters felt superior to you because they are superior to you.

I thought Roger's review was funny but was pretty certain beforehand that I was gonna end up on Scott's side. That flowery Juno rip-off poster, the Alexi Murdoch drenched soundtrack... I was basically expecting to be confronted with people I couldn't stand a la Rachel Getting Married. 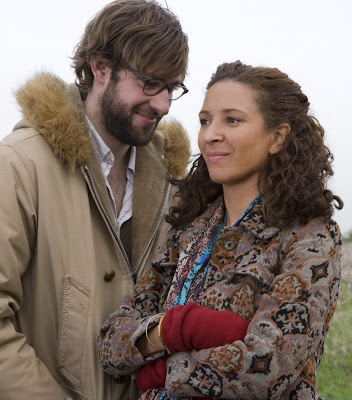 And then I watched the movie and it washed over me with the most genuine sense of good humor and honest emotions... these were wonderful people, people I want to strive to be like. They were posuer horror-shows wearing liberal fright-masks like the folks in RGM, they were people I actually recognized in myself. They were flawed, A.O. Scott. They were insecure and aimless and drowning in their pasts. But even though they had no idea where the hell they were going or what they were doing, all it took was the fundamentals viewed from a slightly skewed vantage point, somewhere unexpected yet wholly obvious in the end, but nonetheless completely satisfying, to put the pieces together.

If you haven't seen the film all that last bit probably won't make a lick of sense, and if you have it might not make a lick of sense either because I'm trying not to give away the film's end-game. Not that there are huge shocking plot twists but I didn't see where they were headed and once it clicked into place I found it terrifically moving. I found the whole film moving, from the warm and funny performances by Krasinski and Rudolph to the supporting characters - and fuck you, A.O. Scott for reducing Melanie Lynskey's heartbreaking performance as nothing but being a vehicle for Mendes' "contempt" and "pity;" were you even watching the screen? But besides Lynskey, Allison Janney and Maggie Gyllenhaal - Oh glorious, hilarious Maggie! - give blisteringly funny performances as opposite sides of the horrible-mother coin. But even though they were both playing for the back-row, I still found their characters human and more than a little truthful about plenty of people I've known. 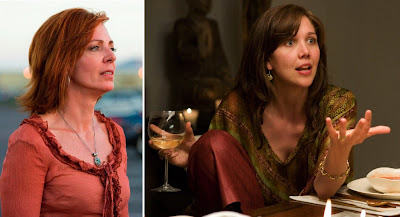 So yeah. I loved the film. Put me on team Ebert once again on this one. And I get why Roger had the irritable tone in his review. You feel protective towards these characters.
.
Who? Jason Adams When? 12:33 PM

Will this movie ever be released nationally?!!!!!I keep seeing the commercial for it and hold my breath waiting for the announcer to say the release date, but every time he disappoints me by saying, 'Now playing in select theaters'. boo.

Sibia Marie, not sure where you live but here's a listing of when and where it's being released. I hadn't even realized it didn't open across the country. That sucks. I think it'd make for perfect counter-programming.

I haven't seen it yet, but maybe AO Scott didn't like it because his mom is a gender studies professor. He does spend a lot of time in the review disliking what they did to Maggie Gyllenhaal's character. http://en.wikipedia.org/wiki/A.O._Scott

Good call, ant. I could totally see him having been breast-fed way past the reasonable time.

Maggie was AMAZING in this by the way. Even if you don't like any of the rest of the film I can't see how you couldn't think she was just HYSTERICAL. She's riffing on her own "breast-feed in public" hippie mom rep and it's very VERY funny.

Yes, exactly! I got to see this last weekend as part of our cinema club series & the critic there for the Q&A hated the movie while most of the audience loved it. I wonder if it might play out that way on a larger scale too.