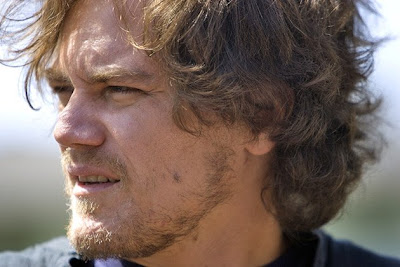 The more that I hear about it, the higher my expectations for Werner Herzog's next flick - called My Son, My Son, What Have Ye Done? - raise. Which, if you already know of my affections for Mr. Herzog, means ya know they were already astronomical as soon as I heard it was him making a movie, period. That's all it takes. But this thing sounds proper righteous.

STYD has a synopsis of the film, which stars the really really great Michael Shannon (seen above right), and co-stars Udo Kier, Grace Zabriskie, Willem Dafoe, Chloë Sevigny and Brad Dourif. (How's that for a fucking ensemble? Every single one of them makes my skin crawl in the most awesome fashion.)

And STYD also linked over to here where the first bit of (very very tiny) promo art for the film, there to the left, first appeared.

They also link to a report from the set in San Diego, with pictures, that also describe in pretty full detail the true-story off of which the film is based.

I'll be paying a whole lot of attention to this one too, so stay tuned. You know what I'd find refreshing? If one of the world's greatest living film-makers maybe got some credit this go-around. Maybe? Ya think?
.
Who? Jason Adams When? 4:11 PM