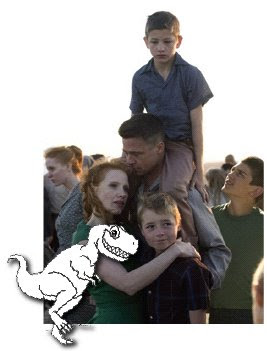 --- Tree Two Films - Some more info on that bit I posted about yesterday with Terrence Malick's The Tree of Life having dinosaurs in it, via AICN:

In what capacity? Is he assisting Mike Fink on the dinosaur footage? I don't know just yet. But he has been seen knocking around Austin with Malick's crew, and I can confirm that he has been shooting footage of some sort fairly recently. Personally, I hope he's involved with the NASA-shot sequences that will allegedly be included in the IMAX movie.

And when I say "IMAX movie", I mean a whole second movie. That's right, we'll be getting two new Malick movies in the next year or so: the first is THE TREE OF LIFE (which one source tells me is "massive"); the other will be an "IMAX-only" feature depicting the birth and death of the universe. It's important to note that these films are not narratively connected; to the best of my knowledge, they're thematically complementary pieces."

Two Malick films in one year? Is it raining pigs with wings outside or what?

--- Fake Little People - The description of Alexander Payne's next film has left me mind-boggled. He's going all Benjamin Button on a bunch of actors turning them into midgets? Mmkay. Can we expect actual little people to protest such a thing? At least a reunion with Reese Witherspoon might remind me why I liked her once. And does Reese Witherspoon really need that much help being turned into a little person anyway?

--- Imagining Parnassus - Cinematical has a gallery of teeny-tiny images from Gilliam's The Imaginarium of Doctor Parnassus that shows what some of the characters look like. How does this movie not have distribution yet? How is that possible?

--- A Barker Pair - STYD has an early look at the film adaptation of Clive Barker's short story Dread, as well as word that the adaptation of the story Book of Blood is sitting on a shelf waiting for somebody to buy it, and that it might end up on TV or straight to DVD.
.
Who? Jason Adams When? 10:14 AM