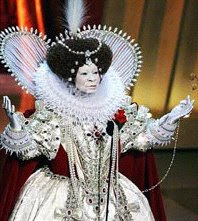 Gawker has a brief bit on what the producers of the Oscars this year are doing to try and rein in more viewers - including some shorts by Judd Apatow about comedy being interspersed through the show, apparently - but comes to the following super-sane conclusion to which I offer an "I heartily concur!" to:

"Ain't nobody ever gonna watch the Oscars who wasn't going to watch the Oscars in the first place. Which is why every time they try to retool, it's such an annoying disaster (remember poor Peter Coyote moored backstage, yelling at people, a few years ago?) Just give us the opening musical number, the Debbie Allen shadow dancers, and maybe Whoopi Goldberg dressed as an old white lady. That's all we want."