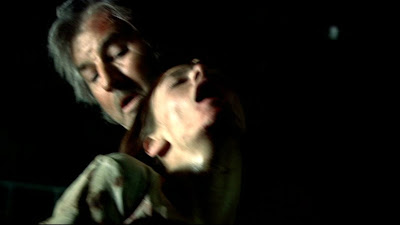 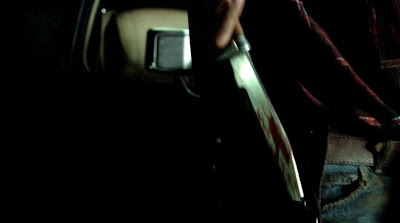 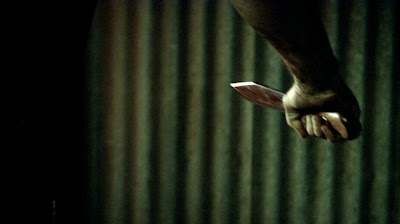 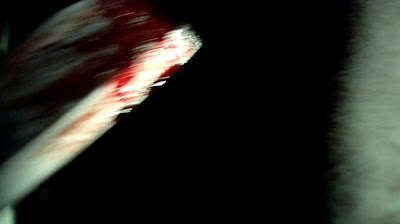 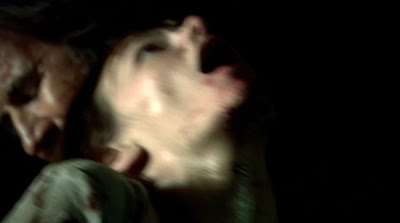 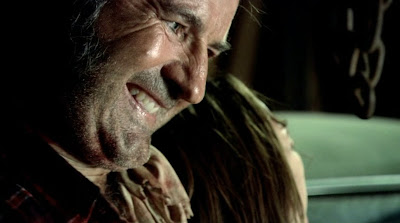 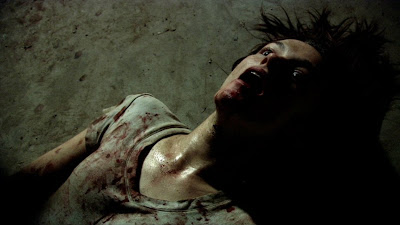 Wolf Creek (2005)
Brevity is, in this case, the antithesis of wit - I kept this one succinct because frankly it's so goddamned horrific that I didn't really like looking at it for too long. But that said, distilling it to a few vaguely suggestive frames... well those are some pretty fucking frames, no? I mean yes, terrifying, but the shot compositions are gorgeous. Which is what makes Wolf Creek, to me, such an incredible head-fucking experience. It is a magnificent movie to look at and a hard movie to watch, all at once.

And as for my calling this moment only vaguely suggestive, it's really only slightly bloodier than its comparative mostly suggestive forebear, the original Texas Chain Saw Massacre. We don't actually see Pam put on the meat-hook in TCM and we don't actually see Liz's spine severed here. We hear sick-fuck Mick telling us what he's up to though, and that is enough to paint the harsh picture. Imaginations are crazy things!

(sidenote: If you are familiar with the film then you know what you're seeing above is A) totally fucked up, and B) not actually a death scene that you're witnessing. But it inevitably leads to poor Liz's off-screen demise and is one of the more honest depictions of what this series is about - ways NOT to die... I really really would like this to never happen to me - so I says it counts.

And since the DVD I own has that bottom image as its cover, I feel a little less bad about spoiling one of this brilliant film's horrors.)

--------------------------------------
Previous Ways Not To Die: A Trip To The Ol' Wood-Chipper -- Pointed By The T-1000 -- Sucking Face With Freddy Krueger -- A Pen-Full Of Home-Brewed Speed to The Eye -- Motivational Speech, Interrupted -- A Freak Ephemera Storm -- When Ya Gotta Go... Ya Gotta Go -- Hoisted By Your Own Hand Grenade -- Having The Years Suction-Cupped Away -- Criss-Cross -- Turned Into A Person-Cocoon By The Touch Of A Little Girl's Mirror Doppleganger -- Satisfying Society's "Pop Princess" Blood-Lust -- Done In By The Doggie Door -- Tuned Out -- Taking the 107th Step -- Rescuing Gretchen -- Incinerated By Lousy Dialogue -- Starred & Striped Forever -- Vivisection Via Vaginally-Minded Barbed-Wire -- Chompers (Down There) -- Run Down By M. Night Shyamalan -- Everything Up To And Including The Kitchen Toaster -- Sacrificed To Kali -- Via The Gargantuan Venom Of The Black Mamba Snake -- Turned Into An Evil Robot -- The Out-Of-Nowhere Careening Vehicle Splat -- "Oh My God... It's Dip!!!" -- Critter Balled -- Stuff'd -- A Hot-Air Balloon Ride... Straight To Hell!!! -- Puppy Betrayal -- High-Heeled By A Girlfriend Impersonator -- Flip-Top Beheaded -- Because I'm Too Goddamned Beautiful To Live -- By Choosing... Poorly... -- Fried Alive Due To Baby Ingenuity -- A Good Old-Fashioned Tentacle Smothering -- Eepa! Eepa! -- Gremlins Ate My Stairlift -- An Icicle Thru The Eye -- Face Carved Off By Ghost Doctor After Lesbian Tryst With Zombie Women -- Electrocuted By Fallen Power-Lines -- A Mouthful Of Flare -- Taken By The TV Lady -- Bitten By A Zombie -- Eaten By Your Mattress -- Stuffed To Splitting -- Face Stuck In Liquid Nitrogen -- Crushed By Crumbling Church Debris -- Bitten By The Jaws Of Life -- A Machete To The Crotch -- Showering With A Chain-Saw -- In A Room Filled With Razor Wire -- Pod People'd With Your Dog -- Force-Fed Art -- Skinned By A Witch -- Beaten With An Oar -- Curbed -- Cape Malfunction -- In The Corner -- Cooked In A Tanning Bed -- Diced -- Punched Through The Head -- Bugs Sucking On Your Head
.
Who? Jason Adams When? 3:45 PM
Labels: Greg McLean, horror, Thursday Kills

I ran through all the implausibilities ... why would she hang out and look at films and photos? How would he know she would get in that car?

Looked up the actors on IMDB.

Wolf Creek is what the Texas Chainsaw remake should have been. I own it but have never watched it a second time.

the serial killer ivan milat took his seven victims to the belangalo state forest in Australia and all had spinal injuries from a large knife.

he gave them the head on a stick just so they couldn't run away.