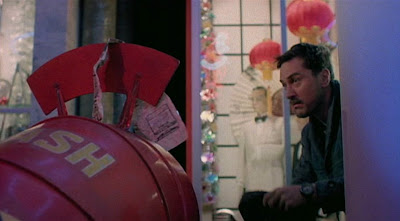 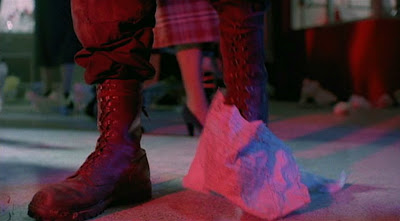 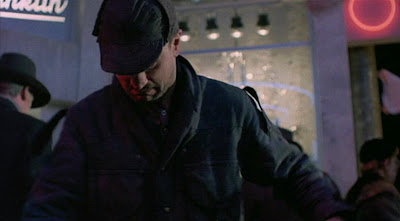 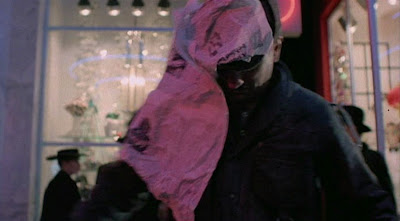 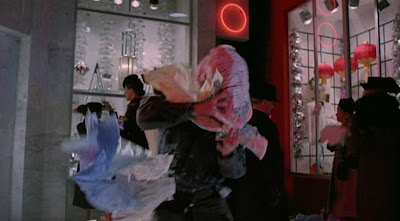 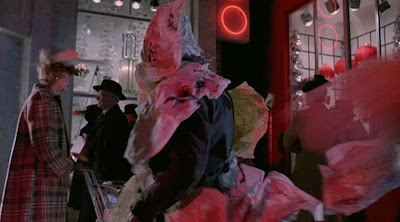 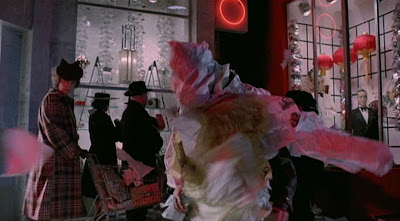 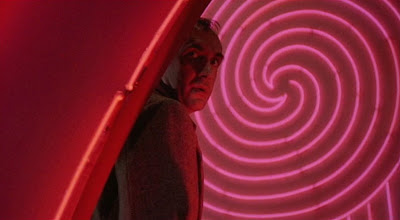 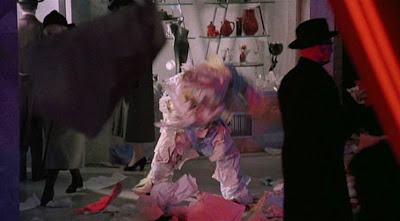 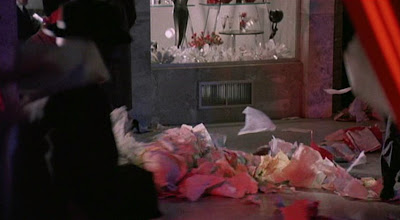 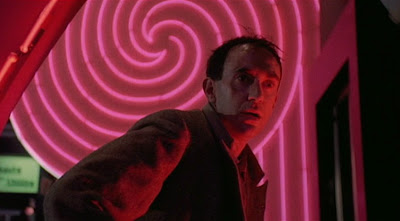 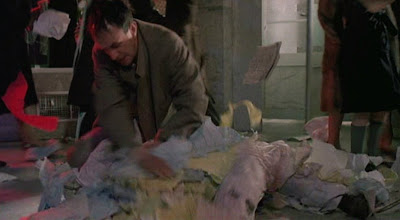 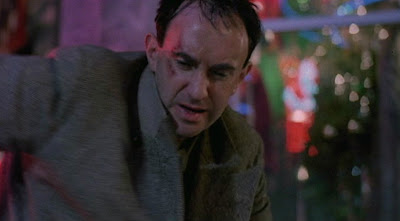 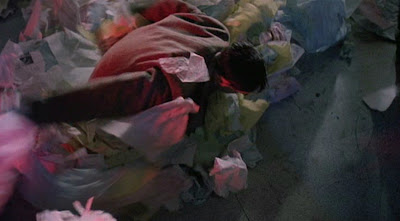 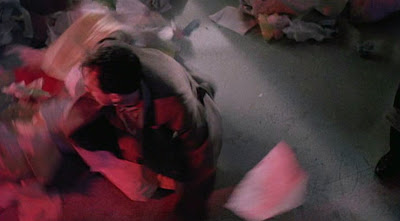 Brazil (1985)
Leave it to Brazil (and Terry Gilliam) to come up with one of the freakiest death scenes ever. Something about this always terrified me - the way the papers just swarm and dissolve Robert DeNiro into nothing... creepy, y'all.

That said, the neon reds and blues in this scene are really, really beautiful to look at.
--------------------------------------
Previous Ways Not To Die: When Ya Gotta Go... Ya Gotta Go -- Hoisted By Your Own Hand Grenade -- Having The Years Suction-Cupped Away -- Criss-Cross -- Turned Into A Person-Cocoon By The Touch Of A Little Girl's Mirror Doppleganger -- Satisfying Society's "Pop Princess" Blood-Lust -- Done In By The Doggie Door -- Tuned Out -- Taking the 107th Step -- Rescuing Gretchen -- Incinerated By Lousy Dialogue -- Starred & Striped Forever -- Vivisection Via Vaginally-Minded Barbed-Wire -- Chompers (Down There) -- Run Down By M. Night Shyamalan -- Everything Up To And Including The Kitchen Toaster -- Sacrificed To Kali -- Via The Gargantuan Venom Of The Black Mamba Snake -- Turned Into An Evil Robot -- The Out-Of-Nowhere Careening Vehicle Splat -- "Oh My God... It's Dip!!!" -- Critter Balled -- Stuff'd -- A Hot-Air Balloon Ride... Straight To Hell!!! -- Puppy Betrayal -- High-Heeled By A Girlfriend Impersonator -- Flip-Top Beheaded -- Because I'm Too Goddamned Beautiful To Live -- By Choosing... Poorly... -- Fried Alive Due To Baby Ingenuity -- A Good Old-Fashioned Tentacle Smothering -- Eepa! Eepa! -- Gremlins Ate My Stairlift -- An Icicle Thru The Eye -- Face Carved Off By Ghost Doctor After Lesbian Tryst With Zombie Women -- Electrocuted By Fallen Power-Lines -- A Mouthful Of Flare -- Taken By The TV Lady -- Bitten By A Zombie -- Eaten By Your Mattress -- Stuffed To Splitting -- Face Stuck In Liquid Nitrogen -- Crushed By Crumbling Church Debris -- Bitten By The Jaws Of Life -- A Machete To The Crotch -- Showering With A Chain-Saw -- In A Room Filled With Razor Wire -- Pod People'd With Your Dog -- Force-Fed Art -- Skinned By A Witch -- Beaten With An Oar -- Curbed -- Cape Malfunction -- In The Corner -- Cooked In A Tanning Bed -- Diced -- Punched Through The Head -- Bugs Sucking On Your Head
.
Who? Jason Adams When? 9:48 AM

Not to be meddlesome, but I think perhaps this is not a "death," at least in the literal sense.

This is one of my favorite DeNiro parts. He gets more time in the directors cut than the release version

Not a death? He gets dissolved by the tedium of the conventional world. It is the most tragic of deaths, the end of the last free man, a rogue plumber.

ja: *cackling fiendishly while jamming a wrench into the massive gears of MNPP's operations*

homeslaughter: Exactly! Hence, not a *literal* death. I see Mr. Tuttle as a symbol. I could be wrong. It's ambiguous, after all. He's the lone man of dissent in a dreary world of Orwellian bureacracy. Or something.