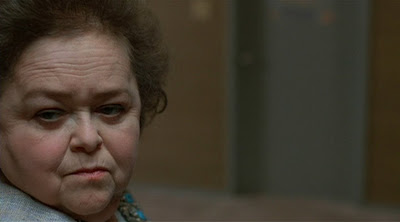 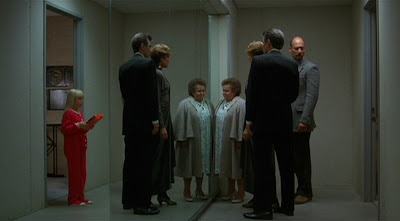 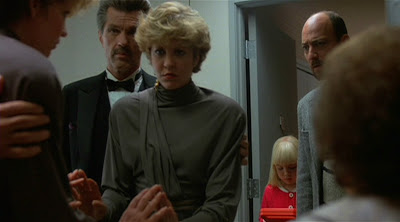 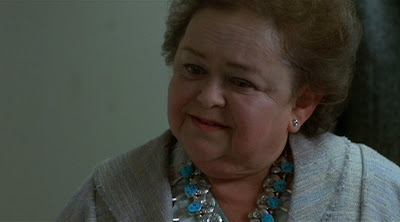 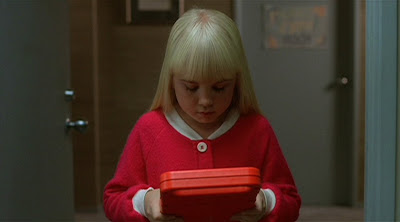 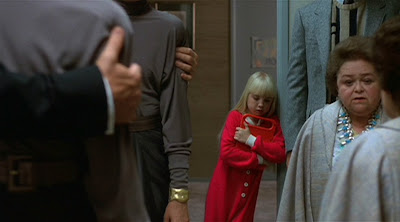 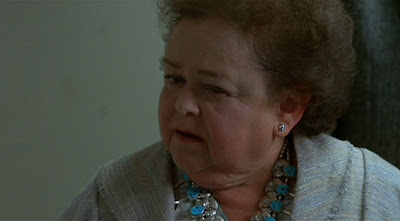 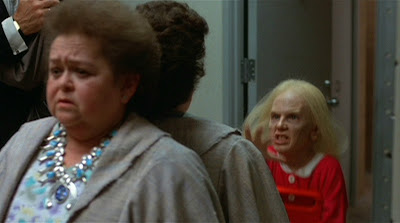 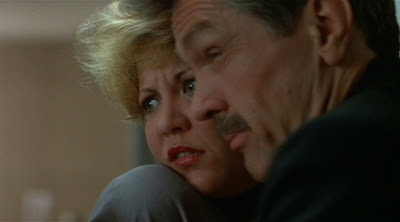 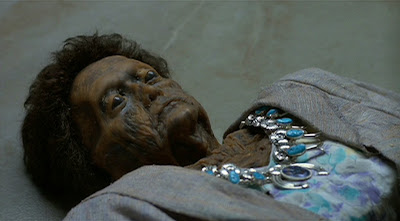 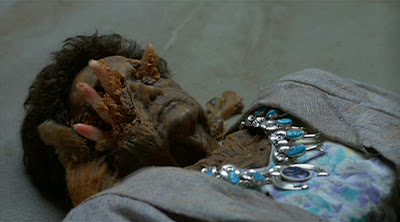 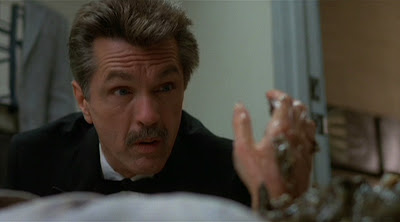 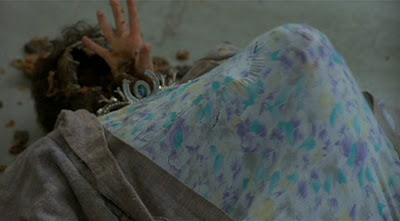 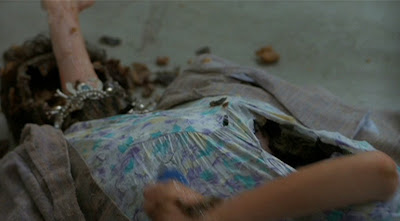 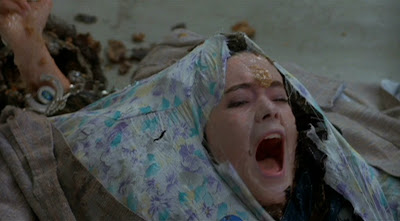 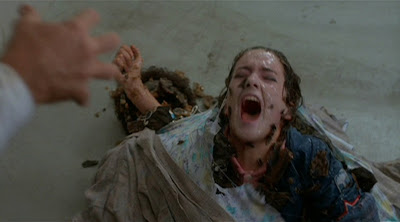 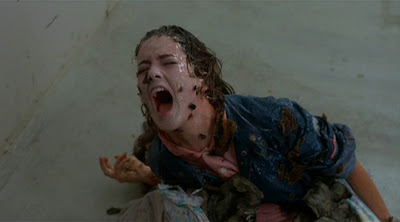 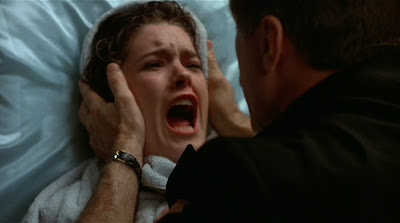 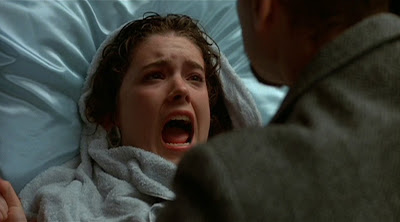 I left in a few extra screen-grabs of Lara Flynn Boyle screaming her ever-loving head off there, because I appreciate the fact that the film allows her to scream and keep on screaming for a good while after erupting out of a little person's dessicated corpse. Because... I think screaming is the correct course of action for her at this point, no?

And thus went one of the great modern day horror characters... not so much with a bang (no "Go into the light!" for her), but more with a "WHAT IN THE HOLY FUCK?" Looking through these shots, the look on Zelda's face just before Carol Anne's evil-mirror-double touches her and turns her into a bug-eyed sawdust-mummy says it all: 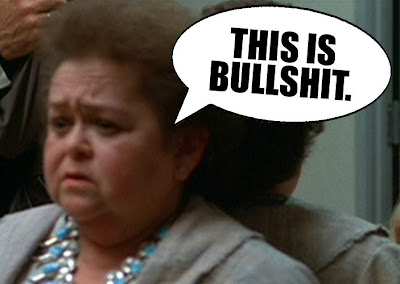 I couldn't agree more, Zelda. But hey, you got the only really memorable moment in the entire flick, so that's something.

Then there's the creepy cover-up the filmmakers played in the final scene... Heather O'Rourke, who played Carol Anne, died before they'd finished filming Part III, so they hired some random little blond girl to fill in. You never see Carol Anne's face in the final scene - just this random little girl in those trademark red pajamas with her face buried in Nancy Allen's enormous shoulder pads: 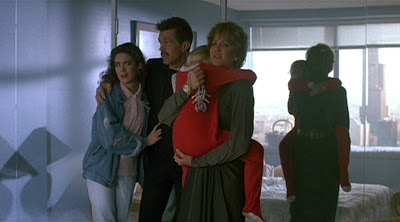 Creepy. And an integral part of the supposed Poltergeist Curse that's wreaked havoc on everyone associated with the films! None more so than Lara Flynn Boyle, obviously: 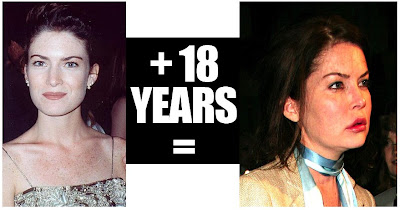 Urgh! That's the scariest picture posted on this entire page. And speaking of Miss Boyle, I came up with a handy guide to knowing which Donna you're dealing with in this film: 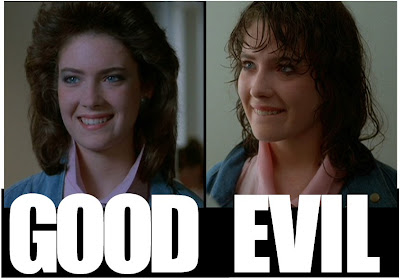 Wash away the AquaNetted halo-o-hair and flip that stylin' polo collar down and suddenly she's Satan's Spawn! And doesn't that just sum up all of the Eighties? Scariest thing that decade ever gave us was those dancing robot ladies behind Robert Palmer, after all.


--------------------------------------
Previous Ways Not To Die: Satisfying Society's "Pop Princess" Blood-Lust -- Done In By The Doggie Door -- Tuned Out -- Taking the 107th Step -- Rescuing Gretchen -- Incinerated By Lousy Dialogue -- Starred & Striped Forever -- Vivisection Via Vaginally-Minded Barbed-Wire -- Chompers (Down There) -- Run Down By M. Night Shyamalan -- Everything Up To And Including The Kitchen Toaster -- Sacrificed To Kali -- Via The Gargantuan Venom Of The Black Mamba Snake -- Turned Into An Evil Robot -- The Out-Of-Nowhere Careening Vehicle Splat -- "Oh My God... It's Dip!!!" -- Critter Balled -- Stuff'd -- A Hot-Air Balloon Ride... Straight To Hell!!! -- Puppy Betrayal -- High-Heeled By A Girlfriend Impersonator -- Flip-Top Beheaded -- Because I'm Too Goddamned Beautiful To Live -- By Choosing... Poorly... -- Fried Alive Due To Baby Ingenuity -- A Good Old-Fashioned Tentacle Smothering -- Eepa! Eepa! -- Gremlins Ate My Stairlift -- An Icicle Thru The Eye -- Face Carved Off By Ghost Doctor After Lesbian Tryst With Zombie Women -- Electrocuted By Fallen Power-Lines -- A Mouthful Of Flare -- Taken By The TV Lady -- Bitten By A Zombie -- Eaten By Your Mattress -- Stuffed To Splitting -- Face Stuck In Liquid Nitrogen -- Crushed By Crumbling Church Debris -- Bitten By The Jaws Of Life -- A Machete To The Crotch -- Showering With A Chain-Saw -- In A Room Filled With Razor Wire -- Pod People'd With Your Dog -- Force-Fed Art -- Skinned By A Witch -- Beaten With An Oar -- Curbed -- Cape Malfunction -- In The Corner -- Cooked In A Tanning Bed -- Diced -- Punched Through The Head -- Bugs Sucking On Your Head
.
Who? Jason Adams When? 10:22 AM

I love evil Boyle!!!!! She gets to do the longest most unconvincing fake laugh in the history of film. I think she even says "they think we're them." under her breath and it's all muhahahaha!!!!!

I just recently discovered the new, re-worked, but not improved Lara Flynn Boyle. It was like having Donna Hayward crawl out of a little person, it was so disturbing and just plain gross. Why would she do that to herself? Maybe with all the evil goings on in Poltergeist 3 she was scared of mirrors?