Dancer in the Dark (2000)
If you know this movie well enough, you might be able to notice that I sorta skimped there towards the end, picture-wise... even watching this scene out-of-context, years since I've sat through the movie straight-through, well... it was too tough taking some of those screen-grabs. I actually started tearing up all over again. But death can't always be fun, ya know! I know, it's hard to buy that, but it's true. 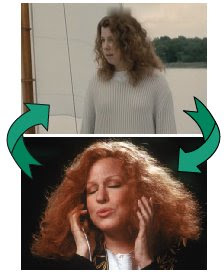 Thankfully, as horrible and upsetting as this sequence is - oh and it is - the presence of the great (and underrated) Siobhan Fallon as "Brenda the Friendly Prison Guard" gives me an out. Because whenever I see her, I think of her hysterical role in Men in Black; specifically, of the way she says the line, "It was like he was wearin' an Edgar suit." She says "Edgar" like "Egger," ha ha. So I laugh about that. And then I think about her turn as a CC Bloom impersonator in the Funny Games remake last year, and I laugh about that, too. Ha ha ha. So much to laugh about. Sigh.

Poor Bjork. Not only did Lars von Trier make her never want to act again (unless she's having skinning-myself sexy-times with her real-life 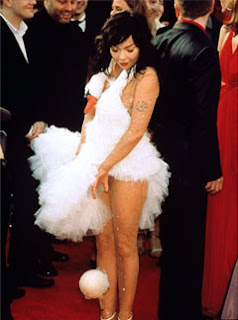 lover, apparently), but the Oscars didn't nominate her for her brilliant acting work in this film (the second best performance of 2000, after my Ellen of course, although a push-up bra won the statue) and then she wore The Single Greatest Dress Ever Worn To The Oscars Ever and she still gets shit for it for the rest of time. I mean, does no one in this stupid boring world have a sense of humor? SHE HAD A GIANT EGG FOR A PURSE. I love her so. You rock on with your crazy ass, wonderful lady.

-------------
Previous Ways Not To Die: Rescuing Gretchen -- Incinerated By Lousy Dialogue -- Starred & Striped Forever -- Vivisection Via Vaginally-Minded Barbed-Wire -- Chompers (Down There) -- Run Down By M. Night Shyamalan -- Everything Up To And Including The Kitchen Toaster -- Sacrificed To Kali -- Via The Gargantuan Venom Of The Black Mamba Snake -- Turned Into An Evil Robot -- The Out-Of-Nowhere Careening Vehicle Splat -- "Oh My God... It's Dip!!!" -- Critter Balled -- Stuff'd -- A Hot-Air Balloon Ride... Straight To Hell!!! -- Puppy Betrayal -- High-Heeled By A Girlfriend Impersonator -- Flip-Top Beheaded -- Because I'm Too Goddamned Beautiful To Live -- By Choosing... Poorly... -- Fried Alive Due To Baby Ingenuity -- A Good Old-Fashioned Tentacle Smothering -- Eepa! Eepa! -- Gremlins Ate My Stairlift -- An Icicle Thru The Eye -- Face Carved Off By Ghost Doctor After Lesbian Tryst With Zombie Women -- Electrocuted By Fallen Power-Lines -- A Mouthful Of Flare -- Taken By The TV Lady -- Bitten By A Zombie -- Eaten By Your Mattress -- Stuffed To Splitting -- Face Stuck In Liquid Nitrogen -- Crushed By Crumbling Church Debris -- Bitten By The Jaws Of Life -- A Machete To The Crotch -- Showering With A Chain-Saw -- In A Room Filled With Razor Wire -- Pod People'd With Your Dog -- Force-Fed Art -- Skinned By A Witch -- Beaten With An Oar -- Curbed -- Cape Malfunction -- In The Corner -- Cooked In A Tanning Bed -- Diced -- Punched Through The Head -- Bugs Sucking On Your Head
.
Who? Jason Adams When? 12:37 AM

*completely breaks down, fetal position and all*

did you just TOTALLY RUIN THE ENDING OF THIS MOVIE?

which I have been meaning to see for AGES but haven't got around to yet! thanks. thanks a lot.

oh, and thanks for the spoiler alert too.

If you haven't seen it now then that's too bad. And, yeah, it's Lars Von Trier. You had to know it wasn't gonna end happily.

So sad. It's making me teary just thinking about it. But, I wish Siobhan Fallon was in more stuff. I really like her for some reason.

Okay, I've decided you must be joking and I just didn't get it because the series Ways Not To Die so... yeah... spoilers are default.

I hope you were only joking. Right? Tell me I'm right.

I guess it was partly my fault, because I didn't really think it through before scrolling through all the pictures.

Oh, I've never seen the ending to this. My English teacher had us watch it in class, only we started it about three seperate times for some reason and never got past the point where her friend is visiting her in prison. Although he did tell us what happened, so it's not a spoiler or anything. I think she was singing while this happened, right? That scene must be terrible to watch. It's hard even seeing that one little picture at the end.