X-Men (2000)
In the most recent issue of the Buffy the Vampire Slayer comic books - the series that's standing in for an eighth season of the show - there's a brief throwaway gag that references this infamously bad line and it reminded me - do we know whether Joss actually wrote this line yet or not? There were a lot of cooks in the kitchen on that script, from what I remember, Joss only being one of many... and I cannot recall if he's ever taken credit for that particular dubious achievement or not. (ETA according to Wikipedia, "only two of his lines were kept in the final script of X-Men" - yet it doesn't list what two lines! Useless!) In theory, I get the gag - it's a non-pun, a vacuum of suck that undermines the usual bad-ass one-liners that always accompany such ass-kicking moments. Or it was intended to be. Or something. A meta-thing. Only somewhere between the writing stage and the lips of Halle Berry, it all went so horribly, horrendously awry.

And before any of you fanboys throw comments at me about how Toad's not really dead, that Ray Park was supposed to be in the sequel and have a great fight with Nightcrawler but Park has a scheduling conflict and couldn't do it, blah blah, I know these things. But since he never did show up again I count him dead until cinematically proven otherwise. Via the most 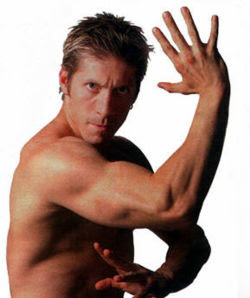 Also, I left a couple extra shots of Mr. Park in there at the top because I'm just now having a realization that he's kind of hot, isn't he? Huh. Whodathunkit? It must've been a pain, acting out the character of Toad, having to make that gaping-maw blow-job face all the time to make room for the CG tongue they'd be adding in later. And then sent off with so little love. A shame.
-------------
Previous Ways Not To Die: Starred & Striped Forever -- Vivisection Via Vaginally-Minded Barbed-Wire -- Chompers (Down There) -- Run Down By M. Night Shyamalan -- Everything Up To And Including The Kitchen Toaster -- Sacrificed To Kali -- Via The Gargantuan Venom Of The Black Mamba Snake -- Turned Into An Evil Robot -- The Out-Of-Nowhere Careening Vehicle Splat -- "Oh My God... It's Dip!!!" -- Critter Balled -- Stuff'd -- A Hot-Air Balloon Ride... Straight To Hell!!! -- Puppy Betrayal -- High-Heeled By A Girlfriend Impersonator -- Flip-Top Beheaded -- Because I'm Too Goddamned Beautiful To Live -- By Choosing... Poorly... -- Fried Alive Due To Baby Ingenuity -- A Good Old-Fashioned Tentacle Smothering -- Eepa! Eepa! -- Gremlins Ate My Stairlift -- An Icicle Thru The Eye -- Face Carved Off By Ghost Doctor After Lesbian Tryst With Zombie Women -- Electrocuted By Fallen Power-Lines -- A Mouthful Of Flare -- Taken By The TV Lady -- Bitten By A Zombie -- Eaten By Your Mattress -- Stuffed To Splitting -- Face Stuck In Liquid Nitrogen -- Crushed By Crumbling Church Debris -- Bitten By The Jaws Of Life -- A Machete To The Crotch -- Showering With A Chain-Saw -- In A Room Filled With Razor Wire -- Pod People'd With Your Dog -- Force-Fed Art -- Skinned By A Witch -- Beaten With An Oar -- Curbed -- Cape Malfunction -- In The Corner -- Cooked In A Tanning Bed -- Diced -- Punched Through The Head -- Bugs Sucking On Your Head
.
Who? Jason Adams When? 9:19 AM
Labels: Bryan Singer, Joss Whedon, Thursday Kills

He did, and he talks about it in this old AV Club interview. Basically he intended it to be a deliberately anticlimactic, throwaway line, and Halle Berry instead opted for ACTING!

How had I never seen that wonderful interview before? THANK YOU, Sean! Awesome. I love how he calls Donald Sutherland a prick! Ha. And says what we all knew - that Paul Reubens is a god.

I'll cut/paste the bit re: Storm's comment since it's what matters:

"JW: ... Actually, there are a couple of lines left in that are out of context and make no sense, or are delivered so badly, so terribly... There's one line that's left the way I wrote it.

O: It's funny that the only lines I really remember from that movie are that one and Storm's toad comment.

JW: Okay, which was also mine, and that's the interesting thing. Everybody remembers that as the worst line ever written, but the thing about that is, it was supposed to be delivered as completely offhand. [Adopts casual, bored tone.] "You know what happens when a toad gets hit by lightning?" Then, after he gets electrocuted, "Ahhh, pretty much the same thing that happens to anything else." But Halle Berry said it like she was Desdemona. [Strident, ringing voice.] "The same thing that happens to everything eeelse!" That's the thing that makes you go crazy. At least "You're a dick" got delivered right. The worst thing about these things is that, when the actors say it wrong, it makes the writer look stupid."